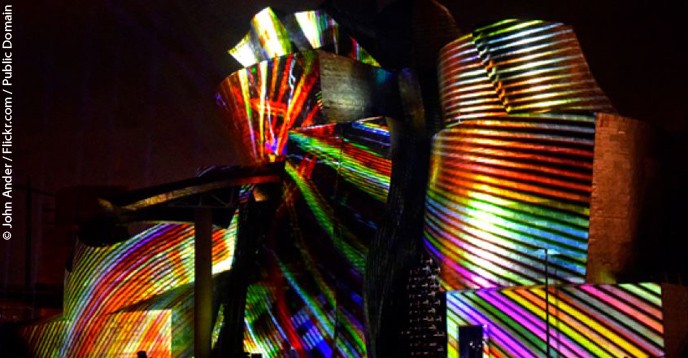 Reflections, a show of light and images on the façade of the Guggenheim Museum Bilbao, Spain.

Crafts and popular arts, digital arts, design, film, gastronomy, literature, music. These are the keys that open the doors to UNESCO’s Creative Cities.

Linked through an ever-expanding network since 2004, these cities rely on creativity and the cultural industries, considered strategic factors for sustainable development – whether economic, social, cultural or environmental. The network currently includes 180 member cities in seventy-two countries. It serves as a platform for action for the implementation of the United Nations 2030 Agenda for Sustainable Development at the city level.

Indeed, among the seventeen objectives of the 2030 Programme, the eleventh –  "ensuring that cities and human settlements are inclusive, safe, resilient and sustainable" – affirms the essential role of culture in urban areas. This is why UNESCO launched an international initiative in 2015, which resulted in Culture: Urban Future, the UNESCO Global Report on Culture for Sustainable Urban Development (2016). It provides a global overview of the safeguarding, conservation and management of urban heritage, and the promotion of cultural and creative industries.

According to British author Charles Landry, who has popularized the concept of creative cities since the 1980s, culture is the DNA of cities. “It is who we are, where we are, where we’ve come from, and where we might go,” he says.