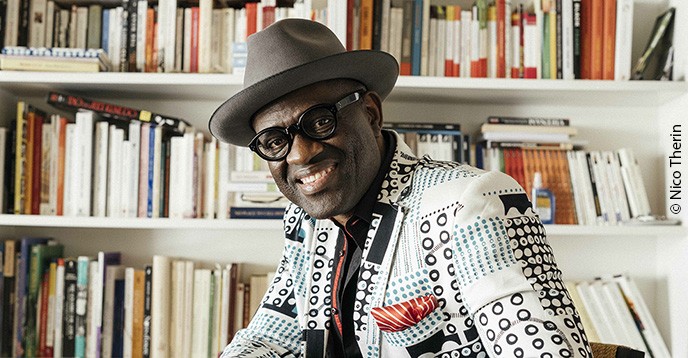 Alain Mabanckou rummages through a “tri-continental attic” filled with things from the past to shed light on the present. How should colonial history be read? What meaning should be given to the restoration of African cultural heritage? And what is the role of the novelist in all of this?  The French-Congolese writer discusses these issues, in all simplicity.

You divide your time between three countries – the Congo, France, and the United States. How does this arrangement work out for you?

As an advantage, of course! This tri-continental culture has allowed me to encounter the variety of the world and to discover what I call mobile Africas. First of all, a mobile Africa within the continent. When I lived in the Congo, I came across West Africans, and that made me aware of Africa’s diversity. When I came to France, I discovered the Western world, but also the Africans that had settled there through colonization and migration – a mobile Africa in Europe. And when I am in the United States, I perceive my continent through an optical  prism that allows me to discern the floating shadows of yet another mobile Africa, deported by slavery and the slave trade. I got acquainted with this African-American world in New York, through Richard Wright, Chester Himes and James Baldwin, writers of the Harlem Renaissance – a movement they launched in the first half of the twentieth century, that revolutionized so-called Black thinking.

So, it’s a kind of tri-continental attic that I sneak into, to retrieve whatever might help to explain tomorrow’s world. The world of tomorrow is the sum of different cultures.

Frankly, I can’t identify with that! That would mean that all the tools for criticism have been corrupted by the neo-liberal system – I am not that pessimistic. There are always ways to thwart a system, and it is sometimes by entering into the vocabulary of that system, by deconstructing it and demonstrating how empty it is, that a new way of thinking can emerge. Just because the peanut has a shell doesn’t mean I won’t break it to see what’s inside, and eat it!

Take the example of African civilizations.They have used Western thought to establish African thought. The Negritude movement was born in Europe, in the minds of the Black and Caribbean students who came to study in France. One of them, the Senegalese [poet and statesman] Léopold Sédar Senghor, entered the Académie Française. And who would question the universality of Return To My Native Land by Martinique’s Aimé Césaire? Who can doubt the power of analyses of another Martinican, Frantz Fanon, in Black Skin, White Masks? These writers have attacked the colonial system and its corollaries from within – and have attacked it using the tools that the system provided them.

“The Belgians are trying to recount their colonial history”, you commented recently on Instagram, after visiting the AfricaMuseum in Belgium. Why did you say that?

A museum is like an individual, who sends out a message by the choice of his clothes,   which can be honest or biased. Some wear a wig. You may fall in love with this beautiful hair and be deeply disappointed when you discover it’s fake! Similarly, when you enter this museum, you say to yourself that it’s very beautiful and finally... nothing. I went around in circles, but I didn’t see the arms that were cut off during the time of Léopold II.

Admittedly, this [recently renovated] museum has given some African descendants an opportunity to tell their stories – it is good to have thought about this. That is not necessarily the case in France where, as soon as there is any mention of colonial history, everyone rears up and takes refuge behind Jules Ferry, who apparently brought us the alphabet!

But if you gave this same museum to Africans to build – indeed, from the front door to the back door, they would have shown the White man whipping the Black man, putting him in the holds, plundering the continent, building a railroad where people die. Know that I would also have written about them on Instagram, that they “are trying to write their colonial history”.

The colonized will present the apocalyptic version of colonization, the Westerner, its supposedly civilizing version. All this must be synthesized. For now, we have only subjective interpretations.

Do you believe it is important for countries to start returning cultural heritage to African countries, such as France is currently undertaking?

I like Felwine Sarr and Bénédicte Savoy's report on the restitution of African cultural heritage [submitted to the French Elysée on 23 November 2018], but let us wait to see what happens in practice.

Restitution raises the same question – how do we reread our colonial history? Why are these looted objects never mentioned in French and European history books? The colonizer made a big mistake in thinking that what we produced artistically was junk. Today, these are the missing elements in the explanation of the global imagination.

Africans simply want us to recognize that the world’s imagination also includes those elements of African culture that have been plundered – and that there would not have been  a Surrealist movement, for example, if these painters had not had the exposure to African art. Going beyond restitution, there is the question of the recognition of Africa as an artistic power.

Does African literature occupy its rightful place in world literature?

African literature in French is still young, it’s not even a hundred years old, and needs time to become established. What is interesting is that it has been able to follow the path of globalization – it takes into account the fragmented dimension of the world and enters into the great dialogue that is taking place here and there, about the current social challenges.

Do you sometimes feel like the voice of Africa?

That would be pretentious. It’s true that I am always flattered to see that more and more Africans, including English speakers, read what I write, identify with it, and are enthusiastic about it. All I do is reciprocate, through stories that speak of their world. I would like people not to think of me as a spokesperson ‒ that would be too Christ-like a destiny ‒ but to think instead that we are writing the books I write, together.

You could have become a lawyer. In 1989, you won a scholarship and left your modest family in Pointe-Noire to study law in France.

My parents wanted me to become a judge or a lawyer. The University of Nantes offered me a place – I studied private law for a year and then came to Paris to obtain a postgraduate degree in business and social law at the Paris Dauphine University.

But writing took precedence over law. It’s a jealous activity that doesn’t like competition. And then, when my parents died, I had the feeling that I had no one left that I needed to make proud of me.

Was there a day when you said to yourself: “I want to write”?

I started writing poems in high school, and, basically, I only wanted to write poetry. I wasn’t aware then that writing could be a main activity. For me, it served to calm my anxieties, to control my loneliness. It became a confession for me, as an only child – a way of refusing the world as it was written, in the present, so that I could invent my own version of the world.

Maybe that’s where the writing began, even if I can’t put a date on the moment when I became aware that this was what I had to do. I continued to write, telling myself that I would work, and, in parallel, from time to time, I would write. By doing it on a regular basis, I was building up my strength for what would become my principal activity – and an obsession.

Before you published your first novel, Bleu Blanc Rouge (Blue White Red) in 1998, you had published four collections of poems. How do novels and poetry work together?

Poetry corresponds to the romantic soul of teenagers – it is the place of first loves, the moment one describes one’s disappointments, or falls in love with Lamartine, Hugo, Vigny, or some other romantic poet. And also, poetry was highly regarded in my country, with great national authors like Tchicaya U Tam’si. We really only discovered the novel in 1979, with the publication of  La vie et demie [Life and a Half] by Sony Labou Tansi, whom I consider to be the greatest writer in Congo. There, we realized that we could also recount something that was not necessarily about personal pain. In the novel, the state of mind no longer belongs to the novelist – it belongs to the character.

Your friend, the Haitian writer Dany Laferrière, says that when it comes to creation, “talent is important, but the most important thing is courage”.  Do we have to dare, to  create?

Writing a novel means polishing each sentence and coming back to it as many times as necessary, to really express the feeling it is meant to. The courage that Dany Laferrière speaks of is synonymous with obsession and strength. The writer is obsessed with the aesthetic project he bears, and he uses all his strength to defend it within his imaginary universe.

When you write, do you expose yourself?

Yes! There is also the political courage, the recklessness to expose one’s self. Writing is not a walk in the park, it is rather a steep road, with potholes, mud, rainwater, stones. Those who don’t have the courage, wear boots. The writer, he walks barefoot and makes it to the end of the road, even if he’s covered with wounds. He has accomplished the project that was within him, the force of the world that he wanted to give birth to. He did it!

With this interview, the Courier participates in the celebration of World Africa Day, on 25 May.

Discover poetry in the UNESCO Courier

A novelist, journalist, poet and academic, Alain Mabanckou is among the most recognized writers in French contemporary literature. Born in 1966 in Pointe-Noire, the economic capital of the Congo, he currently teaches literature and creative writing in the Department of French and Francophone Studies at the University of California, Los Angeles (UCLA). Mabanckou has held the Artistic Creation chair at the Collège de France in 2015 and 2016, and has received numerous international prizes. His work has been translated into thirty languages. His twelfth novel, Les Cigognes sont immortelles (The Storks are Immortal), was published in France in 2018.