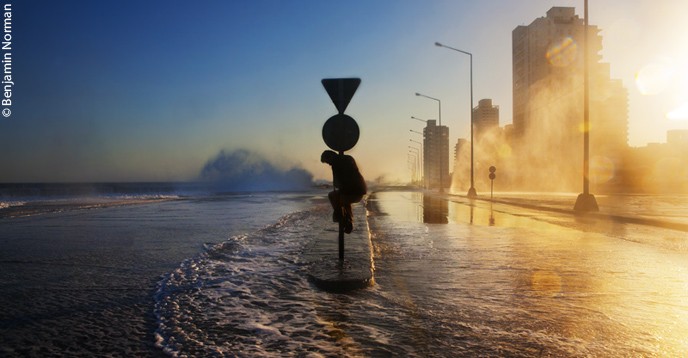 When you speak of Havana, you speak of Eusebio Leal Spengler. Which other city has its own personal historian? On the eve of the 500th anniversary of the founding of the Cuban capital, the City Historian of Havana – who has been in charge of the restoration of its historic city centre for over thirty years – takes us on a journey through its streets and monuments, showing us its strength, its beauty ... and its ailments.

This year, Havana celebrates five centuries of its existence. How is the city faring?

If I were to put myself in the city’s place, I think the ailments you have are what you feel when you’ve lived so long. Five centuries is little in comparison with ancient cities like Athens in Greece, or Istanbul in Turkey. But it’s a lot for us in our Americas – with the exception of the great pre-Hispanic cities like Cusco, the Inca city of Peru, the Aztec Tenochtitlán in Mexico, or the Mayan cities of Central America. Havana was part of the new wave that began with the Spanish conquest and colonization at the beginning of the sixteenth century. The Cuban cities were founded immediately after the cities of Santo Domingo, La Vega, San Pedro de Macorís and Santiago de los Caballeros, in the Dominican Republic.

I believe these cities have reached a noble antiquity, and also show the aches and pains of all the historical moments they have lived through. In our case, it is fundamentally the new era that began sixty years ago with the victory of the Revolution – the resistance of the Cuban people, of which Havana has been an emblem and a symbol.

The historic centre, Old Havana, has been inscribed on the World Heritage List since 1982, for its “outstanding universal value”, that any visitor can appreciate. But what, from your personal point of view, is the value of Havana?

The range of values is very large. There is the symbolic value – it is the capital of the nation, the country’s head. But at the same time, it is very representative of all the cultural, intellectual, political, historical and social values of the Cuban people. It is also a catalogue of the most beautiful and dazzling architecture that the island has ever produced, with features that can also be found in Camagüey, Santiago de Cuba, or Trinidad.

The Moorish architecture, for example, which was influenced by the Hispano-Islamic tradition, is very characteristic of the historical centre. Then, there is also the timid but passionate baroque architecture of the Havana Cathedral – which is more like a state of mind, a kind of feeling or atmosphere that the Cuban writer, Alejo Carpentier, so vividly described in his great novel, El siglo de las luces (Explosion in a Cathedral), 1962.

There is also the neoclassical city, with El Templete, the monument to the founding of Havana. It is rather a small-scale model, that has been reproduced with great originality in other Cuban cities, like Matanzas and Cienfuegos.

And then there is the eclectic city in Centro Habana that is so impressive – filled with gargoyles, Atlanteans, extraordinary figures, imaginary creatures. The Art Nouveau – the Palacio Cueto in the Plaza Vieja – and then the considerable splendour of the Art Deco – as in the Emilio Bacardí building – are almost subversively introduced there, making the architectural dialogue even more intense.

Finally, there is the Havana of modernity, which reaches the height of its splendour with the work of the Viennese architect, Richard Neutra – the Casa de Schulthess, one of the most beautiful houses in the residential quarter where Quinta Avenida [Fifth Avenue] takes us.

Havana is a living city, of wisdom and of memory. In this lively metropolis, we find the acropolis of knowledge that is the beautiful university campus – and the great monumental cemetery, the necropolis, is beautiful too.

Could you tell us what the November 2019 celebrations will consist of?

The city government has developed an extensive commemoration project. The plan we drew up in the Office of the City Historian of Havana, which we designed specifically for the historical zone, is harmoniously incorporated into that project. Our task is to promote the idea of preserving the memory of the city, not only when it comes to commemorating its fifth centenary, but also in everyday life. I’ve dedicated more than three decades to this, and I have to confess that sometimes it felt as though I was preaching that cause in the desert.

Currently, we have developed a series of events, radio and television programmes, and the publication of a number of different works. We also continue to work simultaneously on the restoration of the city’s monumental symbols – the main example of this will be the completion of major work on El Capitolio [the national Capitol building], the Castillo de Atarés and other iconic buildings in the heart of Havana. We will remember and celebrate not only the story of the act of the city’s founding, but also its history and culture.

I would like to emphasize that culture is the key word in our master plan for the rehabilitation and restoration of Old Havana. Any development project that ignores culture, leads only to decadence.

On the other hand, the human factor is just as important. I would like to ensure that these commemorations generate a passion among the people. If they don’t touch people’s hearts, all we will have done is made a few official speeches, moved some stones and printed a few articles.

Would you say that cultural heritage has more to do with everyday life, and is not just about museums?

Of course I believe that museums are essential for history, memory and culture. The Museo de la Ciudad [City Museum] is of vital importance for the entire nation, and not just for the people of Havana. But I have also fought against museumization and defended the cause of a living city.

One of the challenges facing World Heritage cities is the difficulty of reconciling tourism – sometimes on a massive scale – and the preservation of heritage values. Has Havana had to face these contradictions?

We must ensure that Havana does not disappear under a tide of tourists. But at the same time, I believe that tourism – a necessary activity and an important economic factor – should not be demonized. In the case of Cuba, given its isolation, it is also an opportunity to initiate a direct dialogue with visitors from all around the world. That is something wonderful.

While the rehabilitation is completed, many buildings in Old Havana still remain inhabited.

In many cases, the buildings that were in ruins, and that we have restored, were inhabited by very poor families. This is still the case for many of them. The answer has been to provide safe and dignified shelter for thousands of people, offer education for young people and create safe jobs for adults. We have tried to implement what UNESCO defined, at the time, as "a unique project", something different. Unique does not mean better. We do not claim to have done better than other parts of the world. Rather, it was done according to our own experience. In other words, in spite of the setbacks and mistakes we suffered in the search for a rehabilitation model, we finally found it.

You have also put a lot of effort into restoring the Malecón, Havana's emblematic avenue that stretches along the coastline. You have defined it as "Havana's smile".

I must confess that I have almost lost the battle against the sea, a battle that could only be fought by Neptune with his trident. I cannot forget the images of the devastating waves crashing against the Castillo del Morro, which has stood in front of the sea for centuries. These are Dantesque visions that are repeated at every step of a cyclone.

The tornado that hit us recently, during the night of January 27 and 28 [2019], causing the death of several people and wounding some 200, reminds us that the time has come to understand that climate change is a hidden threat to the elegant silhouette of the Malecón, which will always be that beautiful smile that Havana gives to the sea, and that we have a duty to protect.

We have lost the battle against the sea, but we must win our fight against climate change. Great challenges and new adventures await us.

Don’t you ever tire of working for Havana?

It’s true that everything has always led me to Havana. It’s really been many years of work, hard work. I don’t regret it. If there were another life than the one we know here on earth, my soul would wander eternally through Havana. It has been the greatest of my loves, the best of my passions, and the greatest of my challenges. I really do not know why I always mysteriously return to it, in light and silence, in life and in dreams.

Cuban historian, author and researcher Eusebio Leal Spengler is the City Historian of Havana, and director of the Master Plan for the rehabilitation and restoration of its historic centre. His works include Patria amada (Beloved Homeland), Regresar en el tiempo (Back in Time), La luz sobre el espejo (The Light on the Mirror), Fundada esperanza (Founded Hope) and Poesía y palabra (Poems and Words).