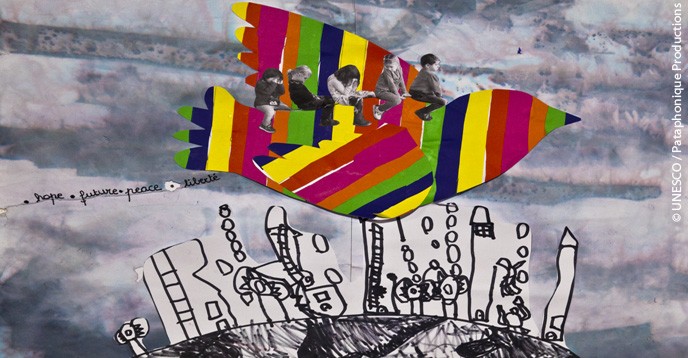 Collage by children at the Sterrenbos pre-school in Hamme, Belgium, which received a special mention at the UNESCO Associated Schools Network global art contest, “Opening Hearts and Minds to Refugees”, 2017.

Faced with a policy against migrants, the inhabitants of London's Haringey borough have launched a welcome campaign that has been shaking up British immigration legislation. Proving that finding common ground is always possible, the borough works with local communities, and the central government funds some of its projects. The idea of everyone working together to create a more welcoming neighbourhood is catching on.

Since the emergence of what is commonly referred to as the "migrant crisis" in the  2010s, the local authorities in Europe have been at the forefront of ensuring the integration of migrants and refugees into their communities. Some act within the framework of political agendas defined by governments, others are more proactive. The Haringey Welcome campaign in north London has chosen to adopt a collaborative approach, while remaining an activist and independent organization that takes a more antagonistic stance when necessary.

Haringey Welcome is based on the notion of political solidarity, defined by the American philosopher Sally Scholz as a positive moral obligation which encourages  collective action in the face of a situation of injustice or social vulnerability. Her ideology is the polar opposite of a hostile environment policy, explains Lucy Nabijou, coordinator of the residents' group that initiated the campaign. "It is about solidarity and justice, about fighting for values, contesting bad law and really trying to work together with the local government, seeking a real collaboration with local authorities to improve services," she adds.

With forty-five per cent of its population born outside the United Kingdom and five per cent having moved there in the last two years, Haringey is one of London's most cosmopolitan boroughs. “Haringey has a strong and proud history of welcoming asylum seekers and refugees and people who have chosen to re-settle in London. There are generations of people from around the world who have moved here and made Haringey one of the UK’s most open and diverse boroughs,” notes a report from the local council to the Cabinet, dated 15 November 2016. It was around that time that the founders of Haringey Welcome took their first steps, demanding that the neighbourhood implement the central government's voluntary resettlement  scheme for Syrian refugees. Claire Kober, then council leader of Haringey and chair of London councils, pledged to relocate ten Syrian families – to give them “a place of safety” and the support they needed “in order to start rebuilding their lives”.

But, as Nabijou points out, the council suffers from a lack of financial resources, training and dialogue with residents and community groups, which undermines its effectiveness. This is why Haringey Welcome has adopted a more collaborative approach in its negotiations with the local council, emphasizing the need to create new communications channels and build relationships based on trust.

The programme’s purpose is not to advocate that elected councillors or local council employees violate national law per se, Nabijou insists, but rather, to increase transparency and accountability and to better navigate through available instruments to provide adequate services for migrants and refugees.

The Haringey council already seems to be moving in this direction. In September 2018, it launched the Connected Communities programme, with funding from the central government. It aims to improve local support for migrants in the areas of employment, housing, learning the English language, childcare and community empowerment. Although she welcomes this initiative, Nabijou has expressed her reservations about the choice of keeping it in-house, the viability of the project if it is tied to the current funding stream, and its ability to reach more vulnerable migrant groups.

Another highlight was the support of elected officials for a motion introduced by Haringey Welcome in November 2018. This, says Nabijou, provides a great opportunity "to put all the problems on the table and to rebuild local management".

The need to rebuild local management is essential in a context of an upheaval in social relations. This is because the so-called hostile environment policy, which targets  undocumented immigrants above all, and aims to deter migrants from crossing territorial boundaries, actually affects the entire population. Migration policies involve not only the different ministries and local representations involved in border control and immigration management, but also the private sector and ordinary citizens. In practice, this means that there are also borders within the country. All aspects of social life are monitored and potentially reported, with increased risks of deportation. As a result, migrants and asylum seekers are discouraged from accessing essential services.

For instance, private landlords are obliged to check whether their future tenants have the right to reside in the country, and to keep proof of this, at the risk of paying a fine or being imprisoned for a maximum period of five years. With a more stringent  redefinition of the “habitual residence” category, access to free health care has been curtailed, and temporary non-European immigrants have been forced to pay an annual surcharge for the duration of their stay. Between 2016 and 2018, schools were required to provide the state with information on children with a migrant background. However, data collection has been stopped as a result of a campaign that is currently fighting for the destruction of this data.

Writing about the shift in focus of recent UK immigration legislation, British academics Nira Yuval-Davis, Georgie Wemyss and Kathryn Cassidy have concluded that it amounts to “everyday bordering in which ordinary citizens are demanded to become either border-guards and/or suspected illegitimate border crossers”. A relative, a friend, or a neighbour could become an informer. As Latvian anthropologist Dace Dzenovsca suggests, personal conflicts could interfere with the defence of borders. These practices disrupt social and political relations, creating fear, suspicion and tensions within communities, and threatening local solidarity and conviviality. It is also important to note that certain social categories (such as those based on race, class or gender) are disproportionately impacted by these policies, indicating the relative fragility of their rights.

In this context, Haringey Welcome contributes to improving social relations on the ground, by building solidarity networks within the borough. The group has been working with schools, for example, to raise awareness of the implications of the hostile environment. It has also garnered support from other local community groups and migrant support organizations – all of whom work together to create a more welcoming borough.

By forging these links and working directly with elected and government officials, Haringey Welcome promotes a form of multi-stakeholder collaboration involving all interested parties. Some of the ways in which this can be done includes bidding for funding for integration initiatives from the Controlling Migration Fund of the Ministry of Housing, Communities, and Local Government.  Establishing a working group of local advisors, migrant organizations and legal experts to develop a strategy for migrants, especially more vulnerable groups, would also be beneficial.

Beyond the political aspect, Nabijou observes that the Haringey Welcome campaign has another side-effect, that is equally central to the initiative. "Through mobilization, you get to know your neighbours, you meet new people, you are better informed about what is happening, and all this blends together to produce an extremely strong sense of community that transforms the place where you live,” she enthuses.

A political scientist, Gabriela Neves de Lima (Brazil) is a research assistant at the Department of Geography and Environment at the London School of Economics and Political Science, United Kingdom. She is a co-author of Cities Welcoming Refugees and Migrants: Enhancing Effective Urban Governance in an Age of Migration, published by UNESCO in 2016.