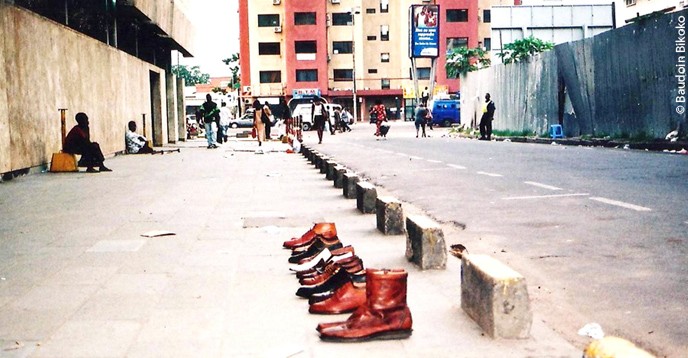 How do you survive when you’re poor and caught up in an interminable series of social and economic crises? You learn how to get by! This is the motto of the inhabitants of Kinshasa in the Democratic Republic of the Congo. Showing great ingenuity, they never miss an opportunity to invent a new job. Romains, chargeurs, and other gaddafis swarm the markets and streets of the megacity, closing the gaps in the system.

We are in the Democratic Republic of the Congo. The scene takes place in the city centre of Kinshasa, the capital. Three young shoe-shine boys sit on rocks at the entrance of a school, equipped with stools, footrests, brushes and sponges. Next to them, a young man has set up a stand and watches over  a cleverly-crafted electric charging system. On a small wooden panel, he has mounted several electrical outlets which are illicitly connected to electrical wires emerging from the ground, where they are attached to the base of a defective street light. This man calls himself the chargeur (charger).

While shoe-shine boys  have long been an integral part of the urban landscape, battery chargers have emerged at the same time as mobile telephones. In the 1970s and 1980s, the city was full of micro-production units – shoe or paint factories, carpenters or jewellers, weaving or dyeing workshops sprouted like mushrooms, mainly in backyards. Since the mid-1990s, small businesses and services have taken over.

You have to know how to fend for yourself if you live in Kinshasa, among some 11 million inhabitants. The economic crisis, the failures of the state and public services, and the scarcity of salaried jobs are forcing city dwellers to earn their living through various forms of self-employment made up of small tasks and expediencies.

In a context of anomy and extreme poverty, la débrouille – the French word for resourcefulness, making do, getting by or improvising – has become a way of life at which city dwellers excel. It is at the heart of all economic survival strategies, especially among young people, who make up more than half of the city’s population.

Like the chargeurs, who fill the gaps in the home electricity distribution system now that mobile phones are hugely successful, other inhabitants show remarkable ingenuity by inventing diverse sources of income, taking advantage of every opportunity to make themselves useful. Starting with next to nothing, they launch new activities to meet different needs.

A table, a bench, some cooking utensils and charcoal are enough to set up a malewa, or cheap restaurant where you can eat for ten times less than anywhere else – even if hygiene is sometimes compromised. Are the buses overcrowded? No problem! The wewas (motorcycle taxis) are there to transport you. Are the streets flooded after the rain? All right, back carriers will ferry pedestrians across. Others, like second-hand spare-part dealers, mobile-phone repairers, or bottled-water vendors, are also at hand to help you out at any time.

A colloquial terminology is developing to keep up with these new activities, characterized by intermediation. The gap left by the lack of organization of public and private infrastructures is filled by all kinds of agents, brokers and subcontractors who offer their services individually or through networks.

In the mid-1980s, the song “Article 15, Beta Libanga” by the Congolese musician Pépé Kallé (1951-1998), was a big hit across the continent, probably because so many Africans could identify with it. Article 15 is an imaginary article in the DRC Constitution that says: “Make do to survive!” All the Congolese know it and refer to it on a daily basis. “Beta libanga” literally means “Break the stone”. “Making do is not easy,” Kallé warns us.

But the future we dream of, often remains distant, and in the meantime, we get by  in Kinshasa, as in many other African cities. Resourcefulness has become a way of being, a marker of urban identity that spans the entire Kinshasa social space. The  informal economy, which proliferates mainly due to chronic shortages, poverty and political instability, is far from being free of schemes, swindles, risks, conflict and violence. Nevertheless, it also includes social values, such as conviviality, solidarity, respect and loyalty. Ultimately, it contributes to a form of social self-regulation.

Admittedly, in the midst of an incomplete modernity, institutions are bankrupt, administrations shaky, civil society unstructured and traditions worthless. Yet what never ceases to amaze in Kinshasa is the resourcefulness and creativity of the people struggling to get by, reflecting the inventive spirit of individuals and the community.

A Congolese social scientist affiliated with the Institut des mondes africains (IMAF) in Aix-en-Provence, France, Sylvie Ayimpam’s work focuses on the issue of the informal economy in African cities. She is the author of Économie de la débrouille à Kinshasa. Informalité, commerce et réseaux sociaux (The economy of resourcefulness in Kinshasa. Informality, commerce and social networks), 2014.