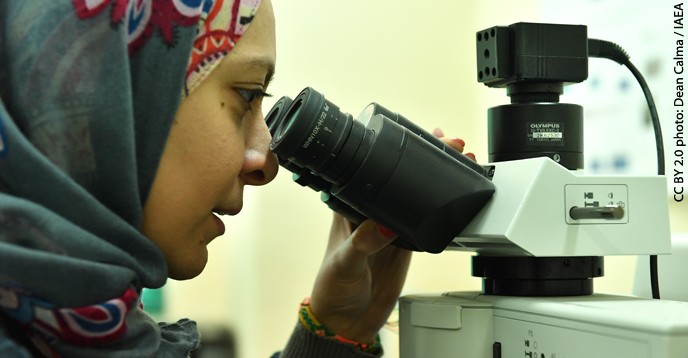 Gihan Kamel, a researcher at SESAME, analyses particles at the infrared beamline lab.

The SESAME international centre for scientific research, a competitive synchrotron light source and the first in the Middle East and neighbouring countries, was opened in Allan (Jordan) on 16 May 2017. This pioneering project, established under the auspices of UNESCO, is the result of 14 years of hard work, uniting eight countries around a twofold goal – to consolidate scientific excellence in the region and to build cross-border collaboration, dialogue and understanding between scientists with diverse cultural, political and religious backgrounds.

The Synchrotron-light for Experimental Science and Applications in the Middle East (SESAME), is the first international centre of its kind in the Middle East. It is a powerful, high-precision research microscope. In it, the electrons accelerate very rapidly up to the speed of light in hollow and magnetized rings. The acceleration of these electrons produces packets of concentrated intense light. These beams are stored and directed to research samples because this light helps to see new and deep dimensions in the researchers' samples. Research areas will range from physics to molecular chemistry and nanoscience, with applications in archaeology, environmental sciences, agriculture, engineering, pharmacology, medicine and industry. In recent years, crystallography studies at synchrotrons have contributed to the award of five Nobel prizes.

Scientists from the Middle East – regardless of their specialism, nationality or religious belief – will no longer have to leave their own region to carry out their research in major centres abroad. They will no longer have to abandon their research interests because of a lack of advanced facilities at home. At the SESAME centre, they can use synchrotron radiation to study their samples, make new discoveries in different areas of science, analyse their results and exchange data. The centre will enable them to establish research networks with other researchers in the region and with those working in over 60 synchrotron facilities in 25 countries around the world. About 50,000 researchers worldwide use synchrotron facilities for their work.

The SESAME centre is a remarkable achievement for several reasons. First, it marks a return to the exact sciences in the Middle East, after a long absence stretching back to the 13th century. It enables a ray of hope to shine in this region of the world, marked by chaos, political conflicts and economic gloom. With this centre, scientific research, cooperation and joint achievements can take the spotlight again, in a region dominated almost exclusively by crises, accusations, punishments and terrorism.

Let us begin with a scientific fact: at 99 degrees, water is hot; it does not boil or produce steam until it reaches 100 degrees. This steam was used to power trains and factories, laying the foundations of the industrial revolution. One little degree extra made all the difference and led to a massive revolution.

The same principle governs our lives – success alone is not enough; a further degree of performance is needed to make a real change and achieve excellence. In the traditional equation, success comes from a mix of patience, good preparation and determination; but in the merciless context of competition for scientific excellence, it also needs something extra – creativity, or the ability to go beyond the ordinary. It is this degree that makes the difference between work that is satisfactory and work that is excellent.

Such is the story of the SESAME synchrotron. From the moment the idea first entered the minds of the researchers who supported this dream, they put their energies into its realisation at every step of the way – raising the necessary funding, building the infrastructure, training staff, developing work plans and carrying them out …  right up until the day of the inauguration. Without these extra steps taken by all the participants, from individuals to States and institutions, this pioneering scientific achievement would never have been completed.

From the moment they realised that the Middle East needed its own advanced research centre, scientists started working in earnest to make it happen. In 1997, Herman Winick of the Stanford University National Accelerator Laboratory (SLAC) in the USA, and Gustav Adolf Voss of the German synchrotron centre, suggested that the German Bessy I accelerator, when it was decommissioned in 1999, be donated to provide the nucleus of an electronic accelerator in the Middle East. This proposal was enthusiastically received by the scientific community. The director of the Middle East Scientific Cooperation group, Sergio Fubini and a former director-general of the European Organisation for Nuclear Research (CERN) Herwig Shopperr, put the proposed project to the German government. They agreed, once UNESCO provided assurances that SESAME would be established under the auspices of UNESCO and that financing of dismantling the facility and its transportation from Germany to Jordan would be taken care of.

UNESCO launched the project in 1999. Three years later, the Organisation officially announced that the accelerator would be built under its auspices, as the project served its own objectives, namely to reinforce security, peace and international cooperation through education, culture and science.

Divisions give way to humanism

Under the leadership of the then president of the SESAME council, Chris Llewellyn Smith, and the centre’s director, Khaled Toukan, seeing SESAME through to completion has required a continuous effort by all those involved – including participating countries, observers and donors – from the start of construction work in 2003 to the inauguration in 2017. Jordan donated the land and covered the cost of construction of the building. Meanwhile, the International Atomic Energy Authority (IAEA) offered specialised high-level training as well as scholarships for researchers and staff. The European Union provided funding worth USD 18 million. CERN shared its wealth of experience during the construction of the magnetic system for SESAME’s storage ring. Other partners - organisations, States, and synchrotron centres around the world – provided advice and expertise, plans and equipment, perfectly illustrating the spirit of solidarity, cooperation, generosity and creativity.

On 16 May 2017, inauguration day, there was an atmosphere of joy, enthusiasm, pride and optimism – but it was also tinged with apprehension. Had all the obstacles encountered during 14 years of hard work really been overcome? The answer could only have been positive – yes, science has the power to unite and transcend divisions in the service of humanity.

The SESAME synchrotron centre does not only owe its exceptional character to the fact that it is the first in the Middle East, or that it has succeeded in getting citizens interested in science when they were preoccupied with the on-going conflicts in the region. It is also the first science laboratory anywhere to be powered by solar energy.

Furthermore, SESAME has benefited no fewer than 750 researchers and engineers from the Middle East, who have followed specialised training courses in research centres and laboratories in countries that are considered to be scientifically advanced. In this way, the centre helps to safeguard the scientific capital of the region, while curbing the brain drain and strengthening the participation of these researchers in the scientific and economic development of their respective countries. It also helps to raise the level of scientific teaching and research in universities and research centres in the region, by building their scientific capacities, multiplying the number of active research projects − and all at low cost. It also serves as a bridge between cultures of East and West and North and South, over and above strictly scientific matters.

The centre has received 55 proposals to use the first two beamlines in response to its first call for applications for beam  time. Researchers from the region will now be able to make discoveries in scientific areas as varied as the early diagnosis and treatment of illnesses, archaeology, the identification of plant diseases to save crops and the analysis of ancient manuscripts without damaging them. :

Other challenges still have to be overcome – the further development of a user community, the development of new radiation packages, consolidation of the centre’s facilities, including an administration building. The running costs for the centre also have to be funded. But none of these challenges will discourage those who believe in the project and its objectives, as it represents both a victory for science and the embodiment of the idea of a common world and humanity.

With this article, the Courier marks the celebration of the World Science Day for Peace and Development, 10 November.

A journalist and communications expert, Anoud Al‑Zou’bi (Jordan) is a specialist in audio-visual information. She is also a producer and presenter of several programmes on Jordanian national television, and was awarded the Cairo Arab Media Festival gold medal in 2014.