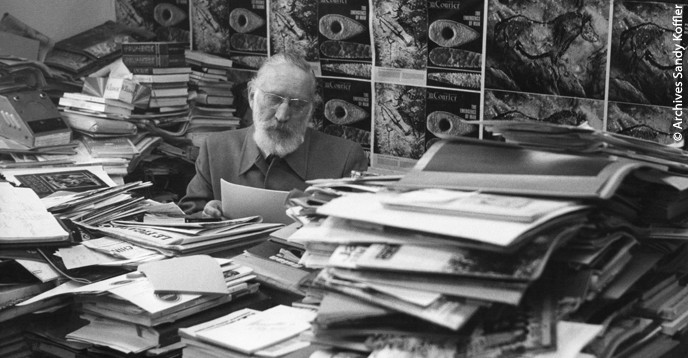 Sandy Koffler in his UNESCO office in the 1970s.

Seventy years after the first issue of the UNESCO Courier was published, we pay an intimate homage to its founder, Sandy Koffler (1916-2002), inviting his granddaughter, Aurélia Dausse, to share some of her memories and excerpts from his notebooks.

The image I have of my grandfather is of a man surrounded by books. He always had a dictionary at hand. In fact, he was a polyglot – he had a perfect command of English, French, Spanish, Portuguese, Italian, Hebrew and Mandarin. I often saw him making notes in a big, black dictionary, his Chinese dictionary – the language he liked the most and ended up speaking seven dialects of! Amazingly, in his house, we were allowed to write in the dictionaries. With him, the book became a living thing. Much more than just something to be used, a book was like a member of the family, inviting itself to our table at any moment during the meal.

Sandy was quick-minded, enthusiastic, imaginative and curious. He was always learning something new, and loved to share with his family – and as many others as possible – the pleasure of studying. This is what he did throughout his life as a journalist, and particularly during his time at the UNESCO Courier.

Sandy passed away in 2002. He left behind a treasure-trove, which I recently discovered when I started researching  my family history – his personal war diary, his letters, notebooks, photos and a complete, bound collection of the Courier. It includes many snippets of life that describe the remarkable journey of an exceptional man. I am deeply moved to be able to render homage to him, in the pages of the very journal he founded and directed for thirty years, from February 1948 to January 1977.

New York to Paris, and back again

Sandy Koffler was born in New York, the son of  immigrants originally from the town of Chernivtsi, in Bucovina, Romania (now a city in western Ukraine). Like many other immigrants, they arrived in the United States via Ellis Island, the small island (in New York Harbor) that housed the federal immigration station. His father, Berl Koffler, after a modest start selling soda water on the street, became a well-known rabbi in the city. He moved to Williamsburg, in Brooklyn, where Sandy was born on 24 October 1916.

After attending New York’s City College, Sandy won a scholarship to study at the Sorbonne in Paris. In 1940, while he was studying in Bordeaux, the American consulate advised him to leave France because he was Jewish. Passionate about French culture and language, he was reluctant to go, not least because his love life also tied him to Bordeaux. He was also sure that his American citizenship would protect him. But when the Nazis invaded France, he finally went to Marseille to board one of the last ships leaving for the US. During a lengthy stop-over in Portugal, Sandy seized the opportunity to learn Portuguese.

Back in New York, Sandy became a part-time columnist for the weekly magazine  America, and also learned the techniques of printmaking. Around that time, he attended seminars by the French anthropologist, Claude Lévi-Strauss, at the New School for Social Research. Lévi-Strauss had also left France just before the Occupation, and the two men became friends.

Several years later, they would meet up again in Paris – one as Editor-in-Chief of the Courier, the other as one of the authors of the first UNESCO Statement on Race (1950), and the author of Race and History (1952), one of the great classics of anti-racist literature. Koffler would regularly invite Lévi-Strauss to contribute to the Courier during the 1950s, so that many of the fundamental articles on anthropology were first published in the Courier, before being reprinted in books. [Editor’s note: a special issue of the Courier with  most of Lévy-Strauss’s articles was published in 2008, titled Claude Lévi-Strauss: The View from Afar.]

The climate of war motivated Sandy to sign up and work for the US Army’s Psychological Warfare Branch (PWB). He trained at the Office of War Information (OWI), a US government information agency, which used modern mass-propaganda methods to disseminate pacifist ideas. He was sent to Rabat (Morocco) aboard an American (naval cargo) Liberty Ship, which was delivering supplies to the Allied Forces during the Battle of the Atlantic. There, he worked as a correspondent and information director for Voice of America radio, developing a round-the-clock programme of world news broadcasts. In 1944, he wrote in his diary: “I can’t tell you how much I love this work, I find it useful and feel it’s worth it.”

Sandy was then sent to Italy, where he set up a newsletter to inform people of the advance of the Allies and to promote peace. It was called Corriere di Roma, Corriere di Venezia, Corriere Veneto, or Corriere dell’Emilia (Bologna), depending on which liberated city or region it was published from.

The Courier is born

At the end of the Second World War, Sandy returned to France and became interested in this new international organization which aimed to foster peace through science and culture in a traumatized world, and which was causing a stir in intellectual circles all over the world – UNESCO. Its headquarters were in Paris, at the Hôtel Majestic, 19 avenue Kléber. The Organization published a two-page monthly black-and-white broadsheet, The Monitor, in English, French and Spanish. The young journalist and columnist offered his services and started work on 26 October 1947,  days after he turned 31.

It was no later than 19 November the same year, that he submitted a proposal for a journal – with its editorial line and periodicity, an outline of its different sections, the number of columns on a page, the length of the articles, the typeface – to Harold Kaplan, the first Director of UNESCO’s Bureau of Public Information. In short, a complete project, which was to become yet another “Corriere” – that of UNESCO.

“The work of UNESCO is so varied, its programme includes such a vast number of vitally important subjects in all the fields of education, science and culture, that it should be no difficulty at all to gather lively, interesting articles,” he wrote. Ambitiously, he did not want to limit the journal’s content to UNESCO’s actions alone, but to offer readers a review of the international press, interviews with leading figures from the Organization and the worlds of culture and science, and in-depth articles written by experts from all over the world.

He suggested employing qualified editors for the French and Spanish editions, so that they would not just be simple replicas and the poor relations of the English edition. He undertook to “make sure that the journal meets the high standards for it to be sold to the general public”.

Sandy succeeded on all fronts, in record time. The first issue of the UNESCO Courier, an illustrated journal with eight well-filled pages, rolled off the presses of the New York Herald Tribune in Paris, in February 1948. A six-monthly subscription was offered to an international readership through agents in fifteen countries in Europe, Asia and America. One of the world’s first international journals was born. 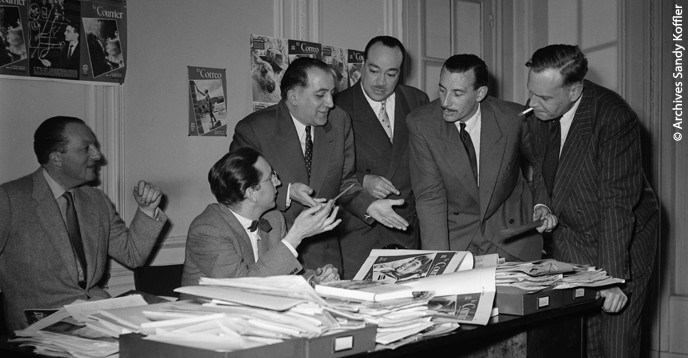 In 1957, the Courier confirmed its international reach with the appearance of its first “field” issue, published in Moscow. The path was clear for other countries to follow. In 1960, a German edition was started in Bern (Switzerland). In 1961,  an Arabic edition was launched in Cairo (Egypt) and a Japanese edition in Tokyo. In 1963, an Italian edition followed, in Rome. In 1967, two editions, in Hindi and Tamil, were launched in India. Between 1968 and 1973, editions in Hebrew, Persian, Dutch, Portuguese and Turkish were added. When Sandy retired in February 1977, the Courier was being published in fifteen languages. In 1988, the magazine’s editions reached an all-time high, appearing in thirty-five languages.

For Sandy, multiplying the number of language versions of the Courier was a way of building bridges between people. This is what he said in Madras (now Chennai), India, at the launch of the Tamil edition: “In the past, nations were self-centred. In the past twenty years, we have witnessed an astounding phenomenon of countries looking far beyond all borders to the horizons, to every corner of the globe, to work together for peace and understanding. This is the message that UNESCO and all the United Nations family is trying to achieve. This afternoon, I had the privilege to see the Chief Minister [of Tamil Nadu state]. He informed me that Madras is prepared to go ahead and has given us the green light for the production of a Tamil edition of the Courier. As the Editor-in-Chief of the Courier, my blood tingled when he said that, because this is an achievement.”

Sandy Koffler was indisputably a great professional, gifted with solid interpersonal skills. A close friend of leading figures who have marked the twentieth century – such as the Swiss ethnologist Alfred Métraux and the American engineer and painter, Frank Malina, both colleagues at UNESCO – he was much appreciated by the first seven directors-general of the Organization. One of them, René Maheu (1961-1974) would say of him that his “talent was never separated from his convictions”.

Determined and charismatic, a tireless worker in the service of UNESCO’s ideals of peace, always watchful to remain politically neutral – even as international tensions mounted during the Cold War – Sandy Koffler had an inflexible character. “He never accepted orders, even from the highest diplomatic and political American officials; he was intransigent, and unshakeable and that posed some problems for him,” said Pauline Koffler, his second wife.

A citizen of the world

In a UNESCO administrative document dated 1959, I read about Sandy that his “professional competence, his technical qualities, his creative faculties, his initiative and his imagination make him a journalist and chief editor of exceptional calibre. He possesses an acute sense of responsibility, a profound professional conscience, undeniable qualities as organizer and leader, and the necessary capacity to be a director”.

Another, much less formal, archive document, which is neither dated nor signed, reveals another aspect of Sandy’s character: “It is true that Sandy’s loyalty towards UNESCO, the United Nations and their ideals was obvious and unshakeable. I remember that every year three colleagues – Émile Delavenay, Thor Gjesdal and Sandy Koffler – who were rarely seen together in town, got together on 24 October, around midday, in a Parisian restaurant to celebrate their respective birthdays as well as, in a special toast, the anniversary of the entry into force of the Charter of the United Nations.”

For my part, I have always admired my grandfather, his intelligence and his character. I am grateful to him for having passed on his attachment to humanist values, his love of books and his fascination for cultures of the entire world.

Delving into his personal and professional archives has made me want to recount, in a documentary that I am working on at the moment, the enthralling story of this American who loved France and who always told me: “I am above all, a citizen of the world”.

Rabindranath Tagore: 'I have fallen under the enchantment of lines' (1957)

Kenzo Tange and the megalopolis of tomorrow (1968)

A French-American director, screenwriter and actor. She studied at Harvard University.