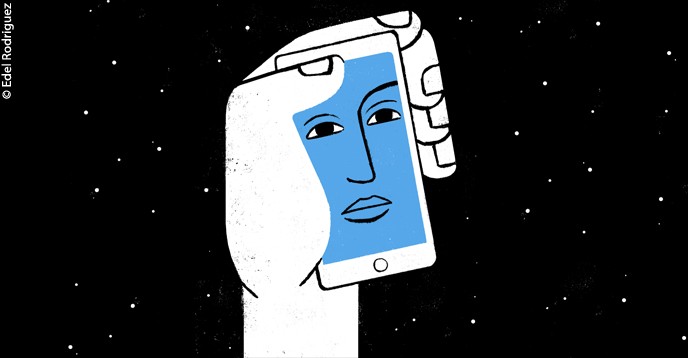 The cover of UNESCO’s A Lifeline to Learning: Leveraging technology to support education for refugees.

The case of Moujahed Akil, a Syrian refugee in Turkey, highlights the fact that  innovative mobile learning practices are best driven from within the communities to address real needs, sustain development, empower members and maximize impact.

When Moujahed Akil fled Syria in September 2012 for fear of being arrested, one of the biggest challenges he encountered in Turkey, his host country, was not being able to communicate with the people there.

“Not knowing the language was very hard, because I could not even discuss the most basic things needed to start a new life in Turkey,” he recalls. “For example, I went to the government building where nobody spoke Arabic, and we had to use our hands and feet to understand each other.” When Akil later obtained a mobile phone, he started using a  translation app to find information relevant to his situation, and to fill in forms that he had previously photographed.

Akil, who was a computer information science student and an Information Technology (IT) freelancer in Aleppo, used his coding skills to find a job at a tech company. With the help of his Turkish colleagues and friends, he learnt the language before too long. He also learnt programming for mobile phones. His own early experience as a refugee inspired him to start working on a smartphone app to help Syrians to obtain all the practical and legal information they needed about resettlement issues and to build new lives in Turkey.

In January 2014, Akil established his own business, Namaa Solutions, with a friend. Based in Gaziantep, Turkey, about twenty-five miles from the Syrian border, the startup harnesses his technical and entrepreneurial skills to develop digital and mobile solutions to address the needs of other Syrian refugees.

Establishing the business posed its own difficulties: “The lack of funding and a sustainable model were major challenges,” Akil explains. But, he adds, “addressing needs is a key success factor. Syrian refugees in Turkey want this information, and now they have it at their fingertips.”  The small business has grown rapidly, and employs a staff of twenty-five – the number of downloads of the app continues to grow. With 3.5 million Syrian refugees in Turkey, according to figures released by UNHCR, the UN Refugee Agency and the Government of Turkey in 2018, this is hardly surprising.

About ninety-four per cent of these refugees live outside of refugee camps, fending for themselves, mostly in big cities. Namaa Solutions’ Gherbtna (“our expatriates” in Arabic) app helps them navigate the hurdles to access basic facilities such as healthcare and education. The app has several tools, including Video, Laws, Find a Job, Alerts, and “Ask Me”, providing answers to everything from legal advice and how to open a bank account, to housing and job listings and even a directory for medical specialists. “Our ultimate goal is to reach all refugees around the world with the app,” Akil says.

According to June 2018 figures released by UNHCR, the world is witnessing the highest levels of displacement on record. Out of an unprecedented 68.5 million people who have been forcibly displaced worldwide, there are nearly 25.4 million refugees, over half of whom are under the age of 18.

“Many Syrian people are students who wish to continue their studies in Turkish schools and universities, and this is why education is the most relevant category on the Gherbtna app,” says the 29-year-old entrepreneur. The app provides information about schools and universities in which Syrian refugees can continue their studies, and lists the requirements and certifications needed to enrol. The second most popular category is information about the laws and rules to be followed during the integration process. After these two categories, the most popular app element is the “My story” feature, which is a platform where personal stories about Syrian refugees and their daily lives can be shared.

Sensing the giant barrier caused by language, and having experienced it first-hand, Akil launched Tarjemly Live (“Translate for me” in Arabic) in 2016. For a small fee (one Turkish lira, or $0.21 per minute), the app connects the user to a live human translator – who are often Syrian refugees themselves – with more advanced Turkish language skills. In this way, Namaa Solutions is also generating jobs for Turkish people with Arabic language skills. Online usage statistics in the first year of operation showed that seventy-seven freelance interpreters translated more than 37,000 words for 17,000 minutes, using calls and texts. Over time, more than 1,500 text and video entries have been developed for the app, covering a wide range of topics.

To complement the app, Gherbtna has a website and a Facebook page.  “The Facebook page is a very strong component of the app, allowing us to directly interact with our users,” Akil explains.

Akil’s innovative spirit has not waned. New projects planned include a learning management system and interactive learning content for Syrian refugees. Another project is buy4impact.com, a trading platform that helps Syrians to sell hand-crafted products to an international market.

With this article, the UNESCO Courier marks the celebration of International Migrants Day, 18 December.

Akil’s inspiring story is featured in UNESCO’s report, A lifeline to learning: Leveraging technology to support education for refugees.  Published in March 2018, it takes stock of existing papers, reports and projects on technology-enhanced learning in refugee education to analyse the challenges facing refugees.

A researcher and lecturer at the University of Applied Sciences and Arts Northwestern Switzerland FHNW, Christoph Pimmer (Austria) specializes in digital learning and knowledge management in education contexts. He has co-authored the UNESCO publication, A lifeline to learning: Leveraging technology to support education for refugees, in 2018.

An associate project officer at UNESCO’s Unit for ICT in Education, Fan Huhua (China)  facilitates the implementation of the UNESCO-Weidong Group Funds-in-Trust project on leveraging ICT to achieve  Education 2030.