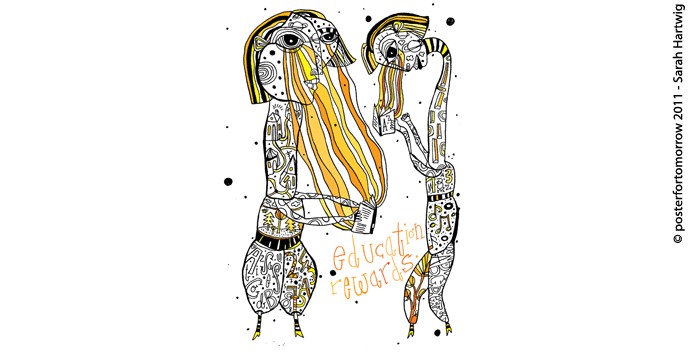 Education Rewards, a poster by German artist Sarah Hartwig, judged one of the Ten Best Posters in the Right to Education competition, organized in 2014 by the human rights non-profit, 4tomorrow.

“Education for freedom does not mean, as it has frequently been thought to mean, a laissez-faire programme of content or of methods of instruction, but the intelligent recognition of responsibility and duty,” wrote the American educator Isaac L. Kandel (1881-1965), in his response to UNESCO’s survey on the philosophical foundations of human rights, sent in 1947, under the title “Education and Human Rights”. Excerpts follow.

A study of recent statements on human rights reveals the curious paradox that the one condition which is essential to their realization and proper use is hardly ever mentioned. Perhaps the omission of any reference to education can be explained on the assumption that it is taken for granted as a human right and as the essential foundation for the enjoyment of human rights.

The history of education, however, provides ample evidence that education has not been regarded as a human right nor has it been used as an instrument for developing an appreciation of the importance of human rights for the fullest development of each individual as a human being. Historically two motives have dominated the provision of education. The first and the earliest motive was directed to indoctrinating the younger generation in the religious beliefs of their particular denominations. The second motive, which came with the use of the national state, was to develop a sense of loyalty to the political group or nation. In both cases, the ends that were sought emphasized acquiescent discipline rather than education for freedom as a human being. […]

Because education has not yet been recognized universally as a human right, it is essential that it be included in any declaration of human rights that may be drawn up. The right to education needs greater emphasis than it is given in the Memorandum on Human Rights, prepared by UNESCO [27 March 1947].

One of the tragic results of the traditional organization of education into two systems – one for the masses and the other for a select group – is that, even when equality of educational opportunity is provided, certain social and economic classes feel that the opportunities are not intended for them. The provision of equality of educational opportunity demands in some countries, measures to change the psychological attitudes produced by the traditional organization.

Thus Henri Laugier, in discussing plans for the reconstruction of education in France, wrote [in the Educational Yearbook of the International Institute, Teachers College, Columbia University, p. 136 f, New York, 1944]: “So many generations in France have lived in an atmosphere of theoretical equality and actual inequality that the situation has in practice met with fairly general acceptance, induced by the normally pleasant conditions of French life. Of course, the immediate victims of the inequality are barely conscious of it or do not suffer from it in any way. It does not occur to the son of a worker or an agricultural labourer that he might become the governor of a colony, director in a ministry, an ambassador, an admiral, or an inspector of finance. He may know that such positions exist, but for him they exist in a higher world which is not open to him. Most frequently this situation neither inspires nor embitters him, nor does it arouse in him a desire to claim a right or to demand a definite change!” […]

The recognition of education as a human right is, however, only one aspect of the problem as it concerns the Rights of Man. Free access to education at all levels may be provided without affecting either the content or the methods of instruction. Traditionally, the quality of elementary education differed from the quality of secondary education; the former was directed to imparting a certain quantum of knowledge, most generally to be acquired by rote and resulting in what the French call l’esprit primaire; the latter was intended to import a liberal or general cultural education. In neither case was there, except by indirection, any deep-rooted training for the use and enjoyment of those freedoms which are included in the list of Human Rights. The emphasis, particularly, since most types of education were dominated by exigencies of examinations, was rather on the acceptance of the authority – either of the printed word or of the teacher.

Freedom is not license

When the pendulum began to shift from an emphasis on discipline, indoctrination, and authoritarianism to an emphasis on freedom, it was too often forgotten that freedom is a conquest and that education for freedom of any kind demands a type of discipline in learning to appreciate the moral consequences of one’s actions. Education for freedom does not mean, as it has frequently been thought to mean, a laissez-faire programme of content or of methods of instruction, but the intelligent recognition of responsibility and duty.

If this principle is sound, it also means a change in the status of the teacher and of teaching. If the teacher is to be more than a purveyor of knowledge to be tested by examinations, then the traditional limitations placed upon him by courses of study prescribed in detail, by prescribed methods of instruction, and by control through inspection and examinations must be replaced by a different concept of the preparation that is desirable for the teacher. That preparation must be raised to the same level as preparation for any other liberal profession. If the efforts of the teacher are to be directed to the development of free personalities and to education for freedom of speech, expression, communication, information and inquiry, the teacher through his preparation should become professionally free and recognize that freedom without a sense of responsibility easily degenerates into license.

Before the Rights of Man can be incorporated into programmes of education, another change is essential. In the past, education has been used as an instrument of nationalistic policy, which too frequently meant indoctrination in either national or racial separatism and superiority. And even where the humanities formed the core of the curriculum, so much attention was devoted to the scaffolding that the essential meaning of humanism was lost. The common goals inherent in the ideal of the Rights of Man can only be attained as programmes of education and instruction are based on the realization that there is no national culture which does not owe far more than is usually admitted to the influence of the cultural heritage of man of all races and of all ages. It is upon this foundation that the freedoms included in the Rights of Man can be laid; it is only in this way that the true concept of humanism as an end in education can be developed. Their attainment, finally, depends upon training in the methods of free inquiry. Education for the various freedoms demands discipline. To paraphrase Rousseau, man must be disciplined to enjoy the freedoms which are his rights.

A pioneer in the field of comparative education, the American educator Isaac L. Kandel (1881-1965) conducted extensive studies of education systems around the world. Born in Romania, of British parents, he was the author of more than forty books and over three hundred articles, the editor of several academic journals, and taught at his almae matres, the University of Manchester in the United Kingdom and Columbia University in the United States.