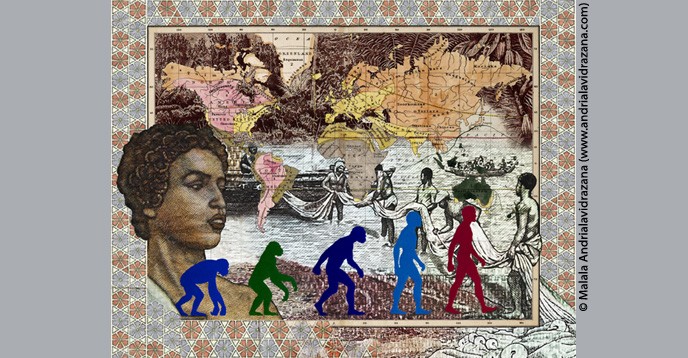 Leading Races of Man, by French-Malagasy artist Malala Andrialavidrazana, whose collages use atlases, stamps, banknotes and other objects produced in the colonial era, to create an artistic cartography of today's world.

“It might be predicted that when colonial peoples set about drafting a Bill of Rights, their claims will tally generally with those of depressed and disabled groups everywhere, but will also show a special distribution of emphasis corresponding to the special character of colonial disabilities,” wrote the British anti-colonialist writer Leonard J. Barnes (1895-1977) in his article, “The Rights of Dependent Peoples”, sent in June 1947 as a response to  UNESCO’s survey on the philosophical foundations of human rights. An excerpt follows.

The general picture of a colony is of a territory where economic subordination entails political disability; where political disability may bring with it severe restrictions upon civil liberty and an exceptional widening of the legal meaning of the word “sedition” (such restrictions being at their most severe when the metropolitan authorities regard the native culture as backward or inferior); and where official anxiety about sedition and allied offences leads to judicial and police practices, which in the metropolitan country would be regarded as unusually harsh.

The consequence is that the subject peoples as a whole, and particularly their more cultivated and better-educated representatives, exhibit to a marked degree, the frustrations and the corruptions of impotence. For it should not be forgotten that, true as it may be that absolute power corrupts absolutely, the psychological effects of absolute powerlessness are no less damaging.

The reflection of frustrations

Formulations of human rights naturally tend to reflect the major frustrations of those who make them. If a right, declared and claimed, is to be more than an empty aspiration, if it is to serve as “a working conception and effective instrument”, it will express the natural demands of dissatisfied groups and of the have-nots of the social order. Liberty is the cry of the bond, equality the cry of the victim of discrimination, fraternity the cry of the outcast;  progress and humanity are the cry of those whom their fellows use as means instead of respecting as ends; full employment is the cry of the worker whose daily job, or lack of job, stunts his soul and mocks his capabilities; social planning is the cry of those who are trampled underfoot when privilege and power strive to make the world safe for themselves. That is why declarations of the rights of man are strong allies of social progress, at least when they are first promulgated. For social progress is reorganization in the interests of the unprivileged.

Hence it might be predicted that when colonial peoples set about drafting a Bill of Rights, their claims will tally generally with those of depressed and disabled groups everywhere, but will also show a special distribution of emphasis corresponding to the special character of colonial disabilities. And in fact, wherever colonial discontent achieves articulate form, it shows a keen awareness both of the fundamental significance of an equity-less economy, with its necessary corollary of political subordination, and of the organic connection between these and the denials of civil liberty common in colonial territories. It is, further, ready enough to subscribe to the traditional democratic slogans of liberty, equality, and fraternity, partly because colonial peoples have wide experience of being used as means to other people’s ends, and partly because such slogans are handy for embarrassing the metropolitan authorities.

But all these diverse sentiments and attitudes are given a particular colouring, they wear a particular livery, distinctive of colonial experience. This colour, this livery, is the claim to equal rights with citizens of the metropolis, the protest against a discrimination that appears, to those on whom it falls, to be as arbitrary as it is comprehensive.

For this reason, progressive movements among colonial peoples tend to assume a nationalist and liberationist form. They are liberationist because their awakening political consciousness sees the established constitutional ties with the metropolis as emblems of foreign domination. They are nationalist because separate nationhood is the repository of state power, and without state power at their disposal, the liberationists can neither sever their political and economic dependence on the metropolis nor take over the administrative functions of the metropolis after the severance has been made.

We should, therefore, see the colonial peoples both as aggregations of individuals repressed and thwarted by specific forms of disprivilege, and as emergent nations struggling to attain equal status with the so-called independent countries in point of sovereignty and international recognition. The claim – we emphasize this – is to formal equality of status. It is not to material equality of function. Nor is it necessarily to full national sovereignty in the classical signification of the term. Colonial peoples object to limitations of sovereignty when they are fastened on them from without, and appear as badges of inferiority. They might well accept limitations, provided they could do so of their own choice in the interests of effective international organization, and provided they were assured that the majority of other free countries were genuinely making the same acceptance.

Such is the position of the dependent peoples, and such are their needs or rights. The needs cannot be satisfied by legislative enactment, nor can the rights be guaranteed by constitutional charter. Attempts to give the force of unalterable law to the claims of particular groups or communities have often been made. But since no legislators can bind their successors for ever, the attempts prove in the end either fruitless or superfluous.

For the hope of seeing their claims acknowledged in practice the colonial peoples must rely on the establishment and maintenance of certain broad politico-economic conditions inside and outside their own countries. Of such conditions perhaps the most indispensable are:

A British anti-colonialist writer, journalist and educationalist, Leonard J. Barnes (1895-1977) worked in the British colonial office and had first-hand experience of colonial rule in South Africa, where he was based as a journalist. He is best known for his book, Soviet Light on the Colonies, published in 1944.