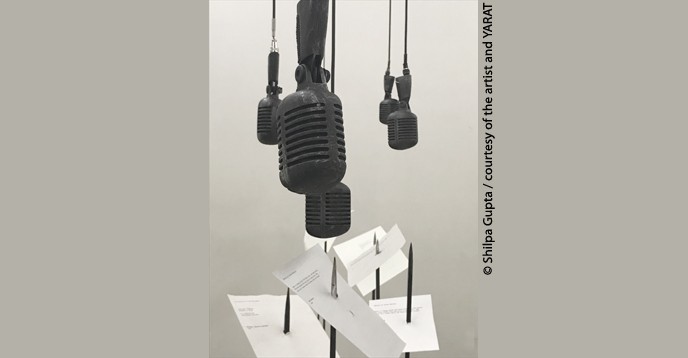 For, in your tongue, I cannot fit, an installation by Indian artist Shilpa Gupta at the YARAT Contemporary Art Space in Baku, Azerbaijan, 2018.

“The same is true of the right to information as of all other rights: its legitimate content must be defined in terms of real needs. Conditionally, of course, on the word 'needs' being understood to mean the needs of human development, and not of self-interest or passion,” wrote the French philosopher René Maheu (1905-1975), in his contribution to UNESCO’s survey on the philosophical foundations of human rights, which he submitted on 30 June 1947, under the title “ Right to Information and to the Expression of Opinion”. Excerpts follow.

It is an error to continue to regard freedom of information as an extension of freedom of expression, the latter itself proceeding from freedom of thought. The individualist concept implicit in this classical sequence, contemporaneous with a press organized on more or less artisan lines, not merely lags behind the concepts of modern political sociology; the economic and technical realities of today clearly involve the adoption of an entirely different viewpoint.

Whether it be the press, news agencies, the cinema or broadcasting, information today is only to a limited degree an expression of opinion. Essentially it is the preconditioning (or the satisfying) of opinion. It either precedes or follows opinion. Moreover that opinion is the opinion of the public and not of news operators, whose task it is in most cases to suppress their personal views. It is a question of mass opinion, and mass behaviour; the techniques of modern news belong to the field of mass psycho-sociology, and not of individual psychology.

The conditioning or exploitation of mass opinion and mass behaviour is today a major industry, whose operation is only to a minor degree affected by the individual views and reactions of its producers and even consumers: that is the social fact which we must take as our starting point.

Neither ethics nor politics can disregard this formidable mechanism. The task is to humanize it. I believe that is one of the major problems of this age.

If we are to prevent what too often occurs, the large-scale alienation of the masses, the same revolution must be achieved as regards information in this century as took place in education in the last century. Information must be a right (hence, too, a duty) and that right must belong to those whose thought is at stake.

A radical reconsideration of the function of information

The inclusion of the right to information among the Rights of Man means more than seeking a mere increase or improvement in the knowledge available to the public. It involves a radical reconsideration of the function of information. It means that the products, the methods, and even the organization of the news industry must be reassessed from the point of view not of the interests or prejudices of those who control its production, but of the human dignity of those who henceforth are justified in expecting of it the means of free thought.

From the moment that information comes to be regarded as one of the rights of man, the structures and practices which make of it an instrument for the exploitation, by alienation, of the minds of the masses, for money or for power, can no longer be tolerated; information becomes, for those who impart it, a social function in the service of intellectual emancipation.

The right to information is a natural extension of the right to education, and that very fact makes it possible to define its concrete content.

That content is sometimes defined as “facts” or raw news, i.e., news that is not interpreted. There should be no illusion about the practical value of the traditional distinction between fact and opinion. What is a fact? A piece of evidence. And the selection of a fact is an implicit expression of opinion. There is nothing more misleading than the chimera of mechanical objectivity. Nor can human liberty look for salvation to the impersonal.

A better definition of information would probably be a detached presentation of materials capable of use by anybody in the formation of an opinion. Whereas an expression of opinion – whether persuasive or challenging – is always militant, the characteristic of information, unlike propaganda or publicity, which proceeds by obsession, is availability.

This being so, it will be asked whether a corollary of the recognition of man’s right to information is not an admission of the right of all to access to all sources of knowledge in all circumstances. Leaving out of account questions of physical impossibility, this straightaway suggests to the mind the many restrictions imposed for the protection of the most legitimate political, economic or personal interests: secrets of State, manufacturing secrets, domestic privacy.

A realistic appreciation of  relativity

But the proclamation of the right to education does not ipso facto mean that the child has a right to learn anything, at any age, and anyhow. It only means that it is the duty of adults to give the child the knowledge necessary for his development in the light of his needs (and capabilities) at his age. A right is no more than an instrument ‒ an instrument for building up man in man's mind. And an instrument is only an instrument if it is related to needs.

The same is true of the right to information as of all other rights: its legitimate content must be defined in terms of real needs. Conditionally, of course, on the word 'needs' being understood to mean the needs of human development, and not of self-interest or passion.

Of their very nature, those needs involve a large measure of recourse to human fraternity and to exchanges between men, an appeal that will always extend far beyond mere egotism. It is true, however, that, as there are great variations in living conditions and modes of development, the needs of human groups are not identical at all points in time and space. These groups do not all need the same information.

There must be no fear of introducing into a consideration of the rights of man this element of historical and sociological relativity. So far from putting in peril the effective achievement of those rights, only a realistic appreciation in the light of that relativity can give them concrete meaning for the men who must fight to make them triumph.

The right to the expression of opinion is much more closely geared to historic relativity. While the right to information must be numbered among the conditions of democracy and thus has the force of a principle, the right to the expression of opinion is part of the exercise of democracy and, as such, shares the relativity of all political realities or practice. A regime blessed with stable institutions and with a body of citizens apathetic or tolerant or whose critical faculties are highly trained, can give the freest rein to the expression of individual views. Indeed it must do so, in the sense that, more than any other, it needs that indispensable stimulus to maintain progress.

Against this, a democratic order in peril in a State torn by passion or possessed of the devils of credulity or, again, a democracy fully committed to a revolutionary or systematic process of reconstruction, is justified in imposing considerable limitation on the freedom of individual expression, the exercise of which is necessarily hostile to complete unity.

Recognition that the right to the expression of opinion must be conditioned by the historical perspective of a particular democracy, is not sacrificing a human right to reason of State. On the contrary, that right is thus given its full meaning by refusal to sacrifice to an abstract concept the merits and chances of success of a concrete undertaking.

Nor is it a question of limitation from outside, as when human liberty is assailed by Fascism or any other tyranny, whether forcibly or by fraud. What is meant is the self-imposed restraint inherent in liberty, which is known as the sense of responsibility.

Just as it is derived from liberty through a twofold internal relationship, so that responsibility is itself twofold.

Firstly, all liberty exists in relation to a certain situation and consequently assumes that situation wherefrom it emerges, at the very moment when by its operating it affirms its power to repudiate it. Thus any expression of free opinion, to be valid, to be its true self, must have regard to the historical and sociological background against which it stands.

Secondly, any expression of free opinion is an attempt to affect the liberty of others. That expression is in essence far more an appeal directed to other free men than the mere exteriorization of an inner conviction. If I express my thought, I do so partly, no doubt, to clarify or demonstrate my own views, but mainly to convince others. But I cannot, without danger of self-contradiction, use my liberty to appeal to the liberty of others without treating their liberty as liberty, i.e. without respecting it.

Thus, recognition of the perspective of the historical moment of society and respect for the liberty of others impose on every citizen in the expression of his views a twofold set of imperatives, whereby he must judge the possibles; these are summed up in the single word, responsibility. Responsibility decides the extent to which the right to the expression of opinion is valid. And hence that extent is relative, like responsibility itself.

In strict ethics, only the subject can and may assess his responsibility, and consequently put a term to the exercise of his liberty in the act of expression of opinion.

But politics replace the disintegrated particles of absolute individual subjects by an ideal collective subject modelled on the framework of the State. Democracy is the reign of the “general will” of the individual citizens. Whether that “general will” is a real force in a living being or a regulating fiction, is a matter of philosophic theory. In practice it is enough that in normal conditions that “general will” be identified by hypothesis, with the majority vote, though capable – in extraordinary periods, e.g. during a revolution ‒ of being embodied in a minority. Thus in a democracy there is a recognized judge of the individual's responsibility in the expression of his views. To be a democrat is to acknowledge that judge.

Admittedly, as no one can be fully a democrat save in a democracy already achieved, and as there are only imperfect potential democracies, it is at all times the citizen's right ‒ and even his duty ‒ to judge his judge. It is the fear of that ultimate appeal which holds back the steps of majorities along the path of tyranny. And similarly it is always ultimately the citizen who decides freely in his own mind whether this is the time for law or for revolution.

That is where politics finally yield to ethics and are absorbed in them. Doubtless in such an appeal ad infinitum, where rules and safeguards successively pass away, there are growing risks of errors. But is there any liberty without risk? Risk abides in the heart of man, for man exists only by inventing himself.

Discover other articles by René Maheu, published in the Courier:

An Opinion on UNESCO’s role in Political Meetings,  June 1948

The Intruders: UNESCO’s Director-General looks at ethics in the mass media, February 1967

French philosopher René Maheu joined the staff of UNESCO when it was set up in 1946, and went on to serve two consecutive six-year terms (from 1962 to 1974) as Director-General of the Organization.