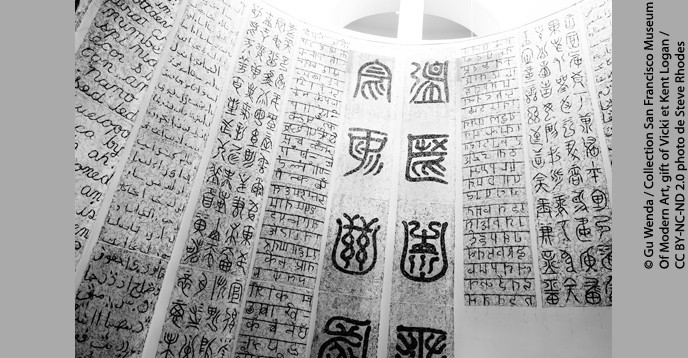 United Nations: Babel of the Millennium, 1999, an installation by Chinese artist Gu Wenda, part of The Divine Comedy of our Times project.

“The basic ethical concept of Chinese social political relations is the fulfilment of the duty to one’s neighbour, rather than the claiming of rights. The idea of mutual obligations is regarded as the fundamental teaching of Confucianism.”  This is what the Chinese philosopher Lo Chung-Shu (1903-1985) wrote in his response, titled “Human Rights in the Chinese Tradition” to UNESCO’s survey on the philosophical foundations of human rights, sent on 1 June 1947. An excerpt follows.

Before considering the general principles, I would like to point out that the problem of human rights was seldom discussed by Chinese thinkers of the past, at least not in the same way as it was in the West. There was no open declaration of human rights in China, either by individual thinkers or by political constitutions, until this concept was introduced from the West. In fact, the early translators of Western political philosophy found it difficult to arrive at a Chinese equivalent for the term “rights”. The term we use to translate “rights” now is two words “Chuan Li”, which literally means “power and interest” and which, I believe, was first coined by a Japanese writer on Western Public Law in 1868, and later adopted by Chinese writers.

This of course does not mean that the Chinese never claimed human rights or enjoyed the basic rights of man. In fact, the idea of human rights developed very early in China, and the right of the people to revolt against oppressive rulers was very early established.

“Revolution” is not regarded as a dangerous word to use, but as a word to which high ideals are attached, and it was constantly used to indicate a justifiable claim by the people to overthrow bad rulers; the Will of the People is even considered to be the Will of Heaven. In the Book of History, an old Chinese classic, it is stated: “Heaven sees as our people see; Heaven hears as our people hear. Heaven is compassionate towards the people. What the people desire, Heaven will be found to bring about”.

A ruler has a duty to Heaven to take care of the interests of his people. In loving his people, the ruler follows the Will of Heaven. So it says in the same book: “Heaven loves the people; and the Sovereign must obey Heaven”.

When the ruler no longer rules for the welfare of the people, it is the right of the people to revolt against him and dethrone him. When the last ruler Chieh (1818–1766 B.C.) of the Hsia Dynasty (2205–1766 B.C.) was cruel and oppressive to his people, and became a tyrant, Tang started a revolution and overthrew the Hsia Dynasty. He felt it was his duty to follow the call of Heaven, which meant obeying exactly the Will of the people to dethrone the bad ruler and to establish the new dynasty of Shang (1766–1122 B.C.)

The right to revolt was repeatedly expressed in Chinese history, which consisted of a sequence of setting up and overthrowing dynasties. A great Confucianist, Mencius (372–289 B.C.), strongly maintained that a government should work for the Will of the people. He said: “People are of primary importance. The state is of less importance. The sovereign is of least importance”.

The basic ethical concept of Chinese social political relations is the fulfilment of the duty to one’s neighbour, rather than the claiming of rights. The idea of mutual obligations is regarded as the fundamental teaching of Confucianism. The five basic social relations described by Confucius and his followers are the relations between (1) ruler and subjects, (2) parents and children, (3) husband and wife, (4) elder and younger brother and (5) friend and friend.

Instead of claiming rights, Chinese ethical teaching emphasized the sympathetic attitude of regarding all one’s fellow men as having the same desires, and therefore the same rights, as one would like to enjoy oneself. By the fulfilment of mutual obligations, the infringement of the rights of the individual should be prevented. So far as the relation between the individual and state is concerned, the moral code is stated thus: “The people are the root of the country. When the root is firm, the country will be at peace.”

A professor of philosophy at the West-China University, Chengdu, Sichuan, the Chinese scholar Lo Chung-Shu (1903-1985) was also a special consultant for UNESCO.