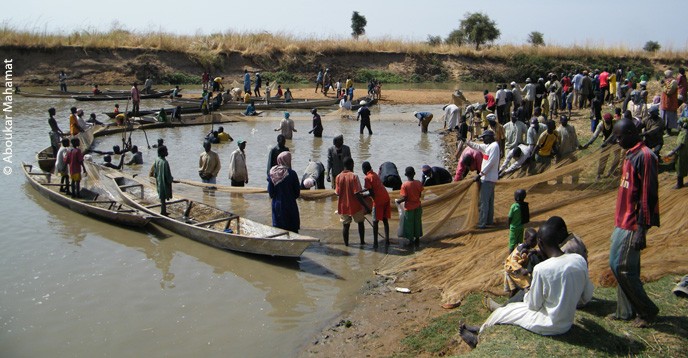 In February 2018, UNESCO launched a major project to strengthen the resilience of people living in the Lake Chad basin, who have been affected by a devastating drought for the last four decades.

The BIOsphere and Heritage of Lake Chad (BIOPALT) project has set itself an ambitious objective – to enable local inhabitants to live and work peacefully on the shores of Lake Chad. Presented by UNESCO on 26 February 2018 at an international conference in Abuja, Nigeria, the project aims to take stock of the region’s natural resources so that they can be managed more sustainably. Pilot actions to restore various ecosystems and foster the development of a green economy will also be carried out.

The challenges are enormous. The Lake Chad basin is a freshwater source for over 40 million people. Reduced rainfall between 1960 and 1985 caused the surface area of the lake to shrink by more than ninety per cent. This dramatic drying-up of the lake has had major consequences for the environment and the economy, plunging thousands of people into poverty and forcing them into exile to escape the region, which is also plagued by conflicts and insecurity.

To cope with the scale of this ecological disaster, BIOPALT has a budget to match. Nearly $6.5 million have been allocated by the African Development Bank, over a three-year period, for the five  countries involved – Cameroon, Central African Republic, Chad, Niger and Nigeria. The project is being implemented by UNESCO, in partnership with the Lake Chad Basin Commission (LCBC), the body that coordinates the actions of States that are stakeholders in the basin’s water resources.

BIOPALT plans to map the water resources in the region and rehabilitate wildlife migration corridors – especially for elephants – between Cameroon, Chad and Nigeria. It also aims to restore wetlands to combat the drying up of water sources and to encourage income-generating activities, such as the cultivation of spirulina – a green algae traditionally harvested by women in the region. Other actions include the protection of the Kouri cow, a species endemic to Lake Chad.

The project is also designed to encourage countries bordering the lake to work together so that Lake Chad can one day be designated as a trans-boundary biosphere reserve. It also intends to strengthen local skills, so that these countries can nominate sites for inscription on the World Heritage List and help identify their Intangible Cultural Heritage.

Social cohesion is another key issue that the project will address.  A series of annual meetings – or lake chats – will allow residents of all ages, ethnicities and religious affiliations to meet and express their different points of view.