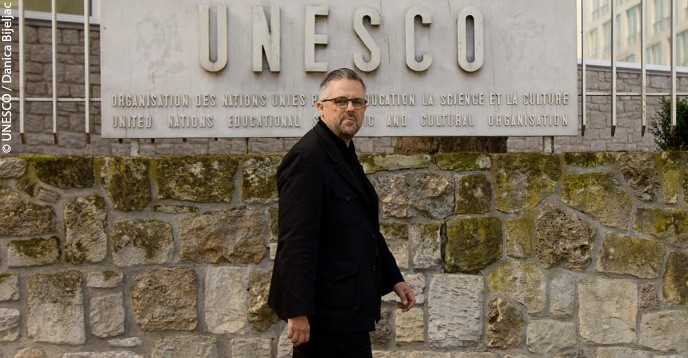 Fernando Bryce in front of UNESCO Headquarters in Paris, June 2018.

“Mimetic analysis” is how Peruvian artist Fernando Bryce describes his work process. It involves using ink on paper, and meticulously copying by hand, texts and images taken from magazines, political pamphlets, posters and old newspapers. Using this technique, he has captured moments from recent history – like the Cuban revolution, the Spanish Civil War and the Second World War – in his work. In 2015, our magazine was the source of inspiration for a series of drawings called The Book of Needs, to which a multilingual supplement of this issue of the Courier is dedicated. Let’s find out what it’s all about.

Could you tell us about the work that you produced using the UNESCO Courier?

It is a series of eighty-one drawings that depict the work of the UNESCO Courier – from its founding in 1948, to 1954 – based on images of its covers or on its articles. The series is part of a whole cycle which I have been working on for several years, with the iconography and representations of the twentieth century. These show temporary advances and setbacks in the world, and each series is constructed differently, with different types of images. I have just finished a series on the Second World War, using archival material that I found – in this case, film posters and newspaper headlines – that reported on war events. After that series was completed, in 2015 I decided to approach my work from a more cultural point of view, both in my discourse and in my subject matter. UNESCO provided me with the theme of the United Nations, founded on the fundamental idea of human rights and its universalist discourse – with all its ideas of progress and its future prospects, at a time when everything was yet to be constructed.

Where does the title of the series, The Book of Needs, come from?

The Book of Needs was published by UNESCO in 1947 to highlight the immense educational, scientific and cultural losses and needs in the world in the post-war period. In (March) 1948, the UNESCO Courier wrote about this, and I found it so emblematic that I used the same title for my series.

How did you access material from the UNESCO Courier?

I had already gathered a lot of material on UNESCO in the process of researching my previous work. I also had access to the digital resources of the Courier archives and the Berlin State Library.

I must say that the magazine is fascinating – a fabulous historical document, that deals with a very special moment, when the idea of progress was genuinely linked to a whole new perspective. A striking contrast between the convictions at the time and the state of the world today.

What surprised me, when going through issues of the Courier between 1948 and 1954, is the observation that many of the problems afflicting the world and humanity at that time remain the same today, and have not been resolved at all. Although the world has changed a lot, the issues that concern us remain the same. 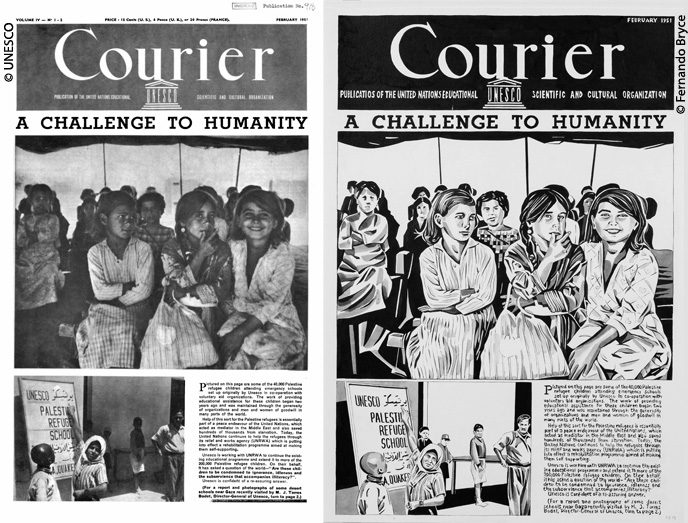 What, according to you, are these concerns?

Anti-humanist tendencies are the real political challenge facing an international organization like UNESCO. There have always been differences in worldviews and representations of the world, but the criticism of a certain universalism, which is too Eurocentric, or the current crisis of multiculturalism, cannot undermine the foundations of, and respect for, human rights. And justly, human rights are a doctrine of faith for the United Nations and UNESCO – whether they are respected or not.

As with your work with the UNESCO Courier, it is a constant in your repertoire to work with historical material and archives, which you transform into art. Could you describe this process?

To begin with, there is always an interest in history, both in the sense of the event and in that of its writing. An archive is organized from the present and history is also in this present. The point of my work is to rescue this history and update it. I convert a documentary universe into a new reality, through drawing. In this new context, these creations can be viewed in a different light, in which documents are perceived as images. What I’m trying to do is a second-hand job, turning the document into a work of art.

In addition to the series inspired by the Courier, I have worked on ARTnews, an American visual-arts magazine founded in the early twentieth century; Arte Nuevo, a Latin American art journal based in Buenos Aires, Argentina, and other magazines and publications. More recently, in May and June 2018, I have exhibited the Freedom First series in Berlin, Germany, inspired by the publications of the Congress for Cultural Freedom, an association founded in Berlin in 1950 to campaign against totalitarian regimes. It is a retrospective look at the start of the Cold War.

When did you come up with the idea of drawing inspiration from the archives?

Twenty years ago, I moved to Berlin. The city was going through a very significant period of transition at the time, and I was very inspired by the place – where there was a great debate about the concept of memory. At these historical moments, the notion of archives acquires its full meaning.

Also, I was not satisfied with the artistic work I was producing at the time. It was then that I discovered the technique of ink drawing, which takes me back to writing without abandoning painting. This discovery, together with the notion of archives and visits to real archives – where the encounter with the past raises all kinds of questions – inspired a new artistic approach in me that has determined all my later work.

Why did you select images particularly from those eighty-one pages and covers of the Courier and what did you want to draw attention to?

My work is a permanent process of selection. In this case, I chose images that seemed to me the most relevant to UNESCO’s mission, namely the fight against racist doctrines and the anti-racist discourse launched by the UNESCO Courier, starting with the writings of Claude Lévi-Strauss, for example. I would like to refer here to the idea of the equality of peoples and cultures and the oneness of humanity.

I also found vintage material related to decolonization, represented both by countries newly liberated from colonial rule and by the terminal efforts of a so-called liberal colonialism that, until the mid-1950s, still believed that it could maintain its empire. And, of course, the question of so-called “primitive” peoples. In this respect, Claude Lévi-Strauss made a great contribution by stating that these peoples were not backward, but that their thinking was complex. Broadly speaking, I am interested in the correlation – highlighted in the Courier – between scientific progress and human progress.

After the great catastrophe of the Second World War, there was a conviction that everything was possible and that the world would be a better place. Do you think this belief still exists?

No, this faith no longer exists. We find ourselves at some sort of dead end, and we have to look for some. There is a sharp contrast between that period of optimism after the Second World War and the situation we find ourselves in today. Updating that material in the way I’ve tried to do is perhaps the mission of my work. From the territory of art and at a necessarily symbolic level where reflection and experiment go hand in hand, we artists may not have the power to change much, but we can, I hope, point out possible horizons.

To know more about The Book of Needs, read the Courier article published in March 1948.