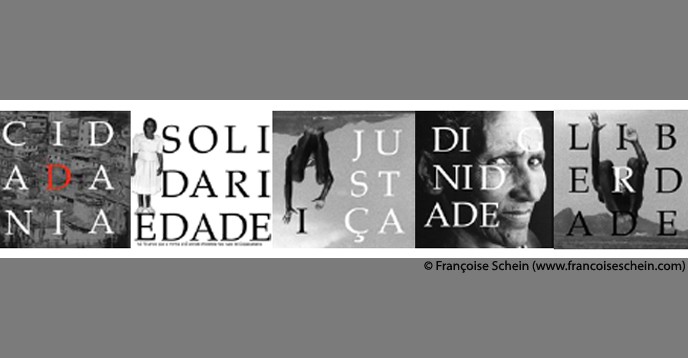 Citizenship, Solidarity, Justice, Dignity, Liberty – digital photomontages by Belgian artist Françoise Schein, who defines herself as an “Artist of the Human Rights”.

The Universal Declaration of Human Rights (UDHR) is undoubtedly one of the greatest documents in history. The first international treaty of ethical values to be adopted by humanity as a whole, it has served for seventy years “as a common standard of achievement for all peoples of all nations,” to quote from the speech of Eleanor Roosevelt – Chairperson of the Commission on Human Rights and of the UDHR Drafting Committee – delivered at the United Nations General Assembly on 9 December 1948, the day before the Declaration was adopted.

Hailed as a unique charter of humanity and accepted as a key reference in today's world when it comes to upholding the human dignity of people everywhere, the Declaration has not been immune to criticism, notably invoking the argument for cultural diversity.

While it is true that in its form, the UDHR is largely inspired by the Western tradition, it is equally true that, in substance, its principles are universal. “Tolerance and respect for individual dignity are foreign to no people and native to all nations,” stated Kofi Annan, the former Secretary-General of the United Nations (1997-2006), at the commemoration of the 50th anniversary of the Declaration at UNESCO in 1998. We pay tribute to the Ghanaian diplomat, who passed away on 18 August 2018.

For his part, Federico Mayor, Director-General of UNESCO at the time, declared that “In ‘commemoration’, there is ‘memory’. We cannot act without memory. But what we must remember in order for our actions to be worthy of our fathers is not so much the date, the place or the letter, but more the sounds, the colours, the feeling or the spirit of the moment.”

This is precisely the goal of this issue of the Courier: to rediscover the spirit of the time, so that we may better inform our reflections on human rights today. The Wide Angle section presents a selection of texts sent in response to a major survey on the philosophical foundations of human rights, launched in 1947 by Julian Huxley, the first Director-General of UNESCO. More than sixty prominent thinkers responded to the call of the young Organization. Mahatma Gandhi was one of them, as were Benedetto Croce, Aldous Huxley, Humayun Kabir, Lo Chung-Shu and Arnold Schoenberg.

“Such a project was particularly timely, for a world consciousness had developed towards this question. Our whole social structure had been shaken by the repercussions of total war. People everywhere sought a common denominator to the problem of fundamental Human Rights,” wrote Jacques Havet – who coordinated the project – in the August 1948 Courier. The answers – some very brief letters, others long studies of the question – reflected, according to the young French philosopher, “nearly all the world's national groups and nearly all ideological approaches”.

Certainly, the world has changed a lot in the last seventy years. Many nations have cast off the colonial yoke, and many cultural traditions have resurfaced since the adoption of the Universal Declaration of Human Rights on 10 December 1948. Yet this effort by UNESCO – to develop a global philosophy based on a broad knowledge of the world's cultures – has lost none of its relevance or validity.

In 1949, UNESCO compiled many of the responses to the survey under the title Human rights: comments and interpretations, to “help the creation of a better understanding between men of different cultures”, as Jacques Havet put it.