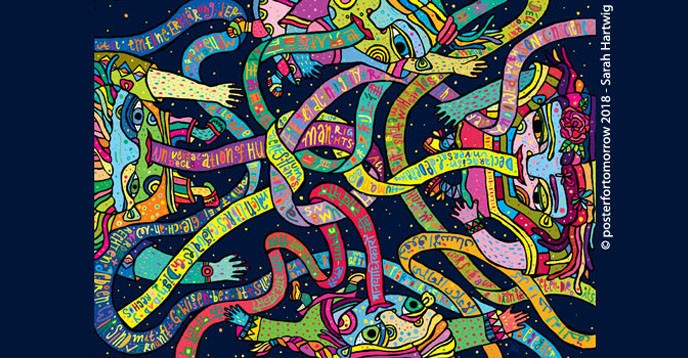 A poster by German artist Sarah Hartwig, one of the participants in the One for all, all for one! competition, organized in 2018 by 4tomorrow, to celebrate the seventieth anniversary of the United Declaration of Human Rights.

The current debates that question the universality of the Declaration of Human Rights are bringing to the fore the initiatives that UNESCO has been taking since 1947, to encourage the discussion on diverse cultural horizons.

Today, the Universal Declaration of Human Rights (UDHR) is widely accepted by most States and is an integral part of international law. Even so, it must be recognized that the global scene has changed since the Declaration’s adoption in 1948. Not only is the composition of the United Nations General Assembly more diverse, but States are no longer the only political actors.  They must now deal with supranational, transnational and local actors who generate, reconstruct or challenge existing normative assumptions.

Moreover, international human rights law is not the only normative order. There are other non-legal options, such as customary, religious, social and cultural norms, which are invoked to uphold fundamental human rights.

In many African societies and some Asian countries, the rights and duties of human beings are observed in relation to the community rather than the individual. While liberalism focuses on the inviolable rights of the individual, Confucianism in China, for example, is more concerned with communal duties. In Africa, the ubuntu philosophy, based on notions of humanity and fraternity, inspired the Truth and Reconciliation Commission in South Africa. The Gacaca courts, which joined the process of national reconciliation following the 1994 genocide in Rwanda, are another well-known example of the use of traditional mechanisms. But there are many others.

The Manden Charter, for example, is considered one of the oldest constitutions in the world, although it is oral and transmitted from generation to generation. Proclaimed at the beginning of the thirteenth century by the Mandingo Empire – which extended over a large part of West Africa in the Middle Ages – the Charter is composed of a “preamble” and seven “chapters” advocating social peace in diversity, the inviolability of the human person, education, the integrity of the motherland, food security, the abolition of slavery by razzia (a raid) and the freedom of expression and enterprise. These principles, that define the rights and duties of members of the Mandingo community are still in force and are supported by the local and national authorities in Mali.

The Charter was inscribed by UNESCO on the Representative List of the Intangible Cultural Heritage of Humanity in 2009 because it represents an eloquent example of traditional social and legal organization – which should not be forgotten.

At the other end of Africa, a community solution that has been established in Swaziland also merits our full attention. In this country, as in many others, a woman who is a victim of domestic violence has only one option to defend herself: to go to the police and file a report. But this is counter-productive, because if the husband is convicted, the breadwinner of the entire family ends up behind bars. This is why women have developed an alternative strategy.

At festive celebrations or solemn occasions, women traditionally perform songs together, while other members of the community, including men, are expected to remain silent and listen. Many of these female choirs, which sometimes perform for hours, have included songs condemning domestic violence in their repertoire. Publicly confronting the men in this way has proven to be far more effective than any recourse to formal justice – according to research conducted by the Cross Cultural Human Rights Centre, established by Chinese, African and European academics in Beijing, China, in 2014.

Another example of the effectiveness and social legitimacy of non-state mechanisms has been identified in India, where Nari Adalats, or women's courts, have been established in rural areas. They are presided over by women who have only a basic knowledge of the Indian Penal Code, but use mediation to resolve cases. In spite of some flaws, the informal courts are a good alternative to the lengthy and expensive procedures of the official courts – they receive local support and funding from the Indian government.

Initiatives that emerge from the cultural communities themselves are likely to be more sustainable and effective in the long run, than changes imposed by external actors or by the state. These systems that serve to protect communities need to be taken into account.

Seventy years ago, UNESCO was saying exactly that, when it stated: “Such a Declaration (of human rights) depends, however, not only on the authority by which rights are safeguarded and advanced, but also on the common understanding which makes the proclamation feasible and the faith practicable.”

This excerpt comes from the report submitted on 31 July 1947, under the title, The Grounds of an International Declaration of Human Rights [p. 1], by the committee of experts that UNESCO had convened to participate in the process of drafting the UDHR. To this end, the Organization had launched a global survey on the philosophical principles of human rights [which is the topic of the main section of this issue of the Courier], in order to include key elements from various traditions and worldviews in the debate.

This document also affirmed the Organization's conviction that “the deeper the re-examination of the bases of human rights, the greater are the hopes that emerge as possible” [p. 3]. It also cautioned against the risk that differences in interpretation, linked to the diversity of cultures, could hinder the agreement and the implementation of the rights set out in the UDHR.

As evidenced in an earlier document, the Human Rights Memorandum of 27 March 1947 [p. 6], UNESCO believed that “We must not…neglect the fact that in other parts of the world other human rights theories have emerged, are emerging, or are destined to emerge”.

After citing fascism as the perfect example of a political system that is theoretically unsustainable and has been completely discredited and defeated in practice, the Memorandum suggests that “a quite new formulation of human rights would be required to embody the views of a man like Mahatma Gandhi, or those numerous Indian thinkers who believe in the social importance and individual value of meditation and mystical experience.”

The document concluded that “we can be reasonably sure that the ferment of thought now apparent in the peoples of black and brown and yellow skin-colour, from Africa to the Far East, is destined to result in still other formulations.”

In spite of UNESCO’s efforts to expand cultural horizons, Asian or African traditions and philosophies were not taken into account when the UDHR was formulated. Although cultural differences were on the agenda, it was the Western perception of human rights that finally prevailed. It is based on the political philosophy of liberalism and focuses on the natural rights of the individual rather than on society and culture. Moreover, the process of claiming and implementing these rights is rooted in Western legal culture, in which states and legislators play the leading roles.

Over the past seventy years, cultural diversity, the influence of non-state actors and legal plurality have received increasing attention. This evolution must be taken seriously, so that the philosophy of the UDHR can be transmitted to local communities and be effective in their contexts and culture.

The current debates on the virtual absence of non-Western ideas in human rights standards – which indicate the unease felt by a part of the world's population – illustrate that the discussion, initiated by UNESCO in 1947, was prematurely dismissed, and that it deserves to be reopened today.

To read more on the question of reconciling the universalism of human rights and the pluralism of cultures, see Creolizing the idea of humanity by Mireille Delmas-Marty (Courier, April-June 2018).

To learn more about ubuntu philosophy, see I am because you are by Michael Onyebuchi Eze (Courier, October-December 2011); and We, the servants and tenants of Earth by Bachir Diagne (Courier, April-June 2018).

Specializing in Human Rights and International Politics, Annemarie Dezentje currently works for the Ministry of the Interior and Kingdom Relations of the Dutch government.