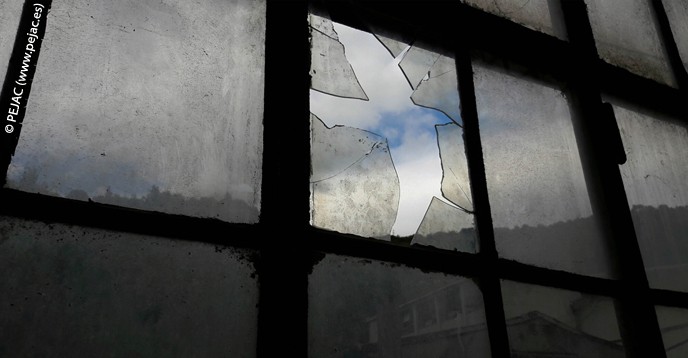 Detail from the Camouflage installation on the windows of an abandoned electricity power plant in Rijeka, Croatia, 2016, by the Spanish artist, Pejac. It is a tribute to Belgian artist René Magritte.

In 1947 and 1948, UNESCO conducted a worldwide survey of a diverse group of intellectuals, political leaders, theologians, social activists and other personalities to gather their opinions on the philosophical foundations of human rights. A survey that was not widely publicized at the time, but one that is surprisingly relevant  today.

The international system that was created in the aftermath of the Second World War took time to emerge. This is, of course, true institutionally – agencies had to be created, headquarters had to be built, staff and leadership positions had to be filled. The difficulties with this “practical” aspect of the new post-war order should not be underestimated. For example, during its first twelve years, the headquarters of UNESCO were located in the Hotel Majestic in Paris’s 16th arrondissement, where bedrooms and bathrooms were used for offices and closets and bath-tubs were used to store files.

But the complications were even greater at the political level.  Although the general outlines of the relationships between the various international agencies were spelled out in charters and constitutions, the actual interactions between these organizations were ambiguous, to say the least, in those early years.

To understand the background of the international system during this period, it is important not to read the history of these early years through the lens of much later developments. Re-reading those formative years with what I have called a “period eye” allows us to appreciate the extent to which the international system – including UNESCO – existed on a shifting landscape, an unsettled firmament that would continue to be in motion to a greater or lesser degree over the succeeding decades.

Such a perspective is particularly pertinent in the area of human rights. The embryonic international community faced two main problems in 1945. The first was how to organize itself in a world devastated by global war and shaped by the contours of colonialism. Would Realpolitik continue to prevail – in a world in which national sovereignty and interests were paramount – or would a new, egalitarian model be created, one that would redistribute power along new political and geographic lines?

The creation of the United Nations Security Council was the answer to the first question. Not only would the UN system be one in which the nation-state would continue to play a foundational role; it would be a system that both reflected and legitimated the fact that certain countries were more powerful than others.

The second question was related to the first, but was even more complicated. Given the horrors that had been unleashed during the recent global conflict – horrors that followed only two decades after the unprecedented carnage and destruction of the First World War – what kind of moral statement could the international community make that would adequately express its collective outrage and hope, however utopian, for a better future?

The answer, or the beginning of the answer to the second question, was to be found in the 1945 UN Charter, which examined the ravages of genocide and imperial militarism and nevertheless “reaffirm[ed] faith in fundamental human rights [and] in the dignity and worth of the human person.”

It was not entirely clear what would be needed for this “faith in fundamental human rights” to take more concrete forms. As the answer to the first question suggests, the powerful members at the core of the new UN system were reluctant to create any structure that could pose a threat – however abstract – to their political and legal prerogatives. Nevertheless, there was sufficient support for what United States president, Harry Truman, described as an “international bill of rights” that the UN Economic and Social Council (ECOSOC) created an international Commission on Human Rights (CHR) in 1946, with eighteen members and with Eleanor Roosevelt as its chair.

Even so, the actual procedure through which the CHR was supposed to produce a bill of human rights was left open. More specifically, it was not at all clear in 1946 how the CHR would establish the moral, religious and philosophical principles on which such a bill of human rights should be based. It was clear that they should be universal and not privilege any one national, regional, or cultural tradition. But where were such principles to be found?

It was at this moment that UNESCO boldly entered the picture. It should be remembered that Julian Huxley, the controversial and charismatic first Director-General of UNESCO, had written a sixty-page blueprint for the new Organization, titled UNESCO: Its Purpose and its Philosophy (1946). In it, Huxley makes the argument that a special international agency was needed in order to help the world overcome its many divisions.

Huxley believed that this only would take place if what he called a “world philosophy” could be developed through cultural understanding, education, and scientific collaboration. For Huxley, UNESCO was to be this unique international agency, charged with overseeing the emergence of what he described as a “single world culture, with its own philosophy and background of ideas.”

It was not surprising, therefore, that the proceedings of the first UNESCO General Conference in Paris took place in this spirit of visionary activism for the new Organization. Apart from electing Huxley as its first head, UNESCO also established a number of major priorities for the coming year. One of these instructed the Secretariat to “clarify the principles on which might be founded a modern declaration of the Rights of Man” [Records of the General Conference, first session, 1946, p.236].

This was precisely the mandate that Huxley needed. In his view, a decisive intervention in the field of human rights would quickly establish UNESCO as the leading UN agency, the fulcrum of the post-war international system, with a unique role as the guardian of what he called a “unifying and unified” global culture.

The unit within UNESCO that was responsible for carrying out this mandate was the philosophy subsection of what was in the beginning the Subcommission on Philosophy and Humanistic Studies. It was headed by a young French philosopher, Jacques Havet, who had recently published a well-received book on Kant (Kant et le problème du temps, 1947). Havet would go on to play a key role in UNESCO’s first human rights project, although the extent of his influence was not known until recently.

Working with a sense of urgency – since they worried that UNESCO’s human rights activities would be overshadowed by the much more high-profile labours of the CHR under Roosevelt – Huxley and Havet got right to work to design a procedure. After several false starts, they decided to do something unprecedented – to conduct a global survey among a diverse group of intellectuals, political leaders, theologians, social activists and others, in order to establish the philosophical principles of human rights.

To do this, they prepared two documents – the first, an aide-mémoire, which provided a short history of national human rights declarations and outlined the important stakes involved in drafting an international declaration; and second, a list of specific human rights and freedoms that respondents were asked to consider in their replies.

In March and April 1947, between 150 to 170 of these surveys were dispatched to an impressive list of social institutions, state organizations, and individuals. Around sixty responses were eventually received by UNESCO – they were not nearly as comprehensive as accounts of the process described, either at the time, or decades later. Nevertheless, the UNESCO human rights survey managed to capture a spectrum of viewpoints on the question of human rights that was arguably wider and more diverse than that produced by the CHR.

Under Havet’s supervision, UNESCO convened an experts committee in Paris in late June 1947 to evaluate the responses and produce a report to be sent to the CHR, so that it could use UNESCO’s findings as the basis for the eventual human rights declaration. The experts committee – E. H. Carr (chair), Richard McKeon (rapporteur), Pierre Auger, Georges Friedmann, Étienne Gilson, Harold Laski, Luc Somerhausen, and Lo Chung-Shu – debated the survey results and sent its conclusions to the CHR in August 1947. At the same time, they discussed the possibility of publishing some of the survey’s responses, which became the basis for the UNESCO volume, Human Rights: Comments and Interpretations (1949).

Meanwhile, throughout most of 1947, there was much confusion among the different UN states about just which agency was responsible for drafting the human rights declaration. Both Huxley and Havet had suggested that UNESCO was undertaking the survey as either the leading institution, or, at the least, in close collaboration with the CHR. Yet, when UNESCO’s report was finally considered by the CHR, in a closed session in Geneva in December 1947, it was met with confusion, and even anger.

Apparently the majority of the CHR members had no idea that UNESCO was undertaking such a survey. In the end, by a vote of 8 to 4 (with one abstention), the CHR decided not to distribute UNESCO’s report to its member states or include it as part of the drafting process that would eventually lead to the Universal Declaration of Human Rights (UDHR).

Lessons for the future

Yet, in spite of the fact that the UNESCO human rights survey of 1947-1948 did not serve its original purposes, it remains strikingly relevant today. The responses offer a unique window into the diversity of thinking about basic issues of human dignity, society, and rights and duties, among many others, in the period before the UDHR codified a much more limited understanding of the Rights of Man.

As recent research on the survey demonstrates, the ability to rewind the history of human rights back to this transitional post-war era has given us an unexpected treasure-trove of ideas at a moment in time in which the status of human rights is as threatened as ever.

As scholars, international officials, and activists struggle to reassert the legitimacy of human rights in the face of contemporary challenges such as resurgent nationalism, the weakening of the European Union, and especially global inequality, the UNESCO human rights survey is proving to be an extraordinary, if unexpected, resource for new perspectives as well as, at least potentially, new solutions.

Professor of Cultural and Social Anthropology and Director of the Laboratory of Cultural and Social Anthropology (LACS) at the University of Lausanne, Switzerland, Mark Goodale (United States) is the editor of the Stanford Studies in Human Rights series and the author or editor of thirteen volumes, including Letters to the Contrary: A Curated History of the UNESCO Human Rights Survey (Stanford, 2018). This book analyses dozens of recently discovered documents about  UNESCO’s activities in the field of human rights during the first two years of the Organization’s existence, thus expanding and revising the general history of human rights.