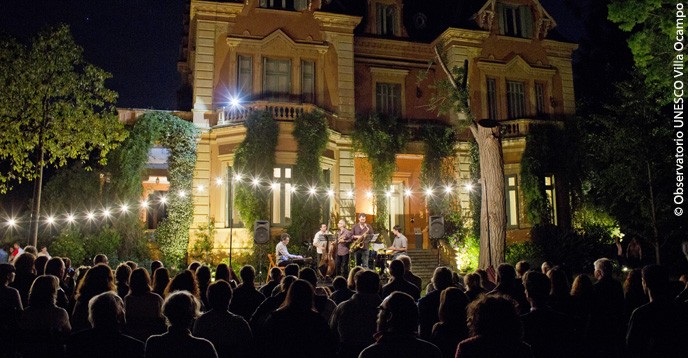 Several high-profile sites on the World Heritage List can now be hired by the wealthy for a wedding or a private party. Does this trend risk tarnishing these places of great cultural value? “No,” says Alfredo Conti, Argentinian architect and heritage conservation specialist. According to him, it could even be a way to initiate a new section of the public into the cultural fold.

Some monuments inscribed on the World Heritage List are now being rented out for private events. Is this acceptable?

The question of how heritage sites should be used, merits some thought – considering that their original purpose may have been lost or changed over time. For example, railways stations have been transformed into museums, while convents and historic houses have been converted into hotels.

A heritage building is steeped in historical and cultural values. The attributes that transmit these values may be tangible – such as the building’s design, its form or construction elements – or intangible, such as its different uses over time, or the traditions associated with it. The basic principle for the current uses of properties is that their new functions should be compatible with the preservation of their attributes and values.

There was a time when heritage sites were seen as sacrosanct, especially those sites that were most significant from a historical or artistic point of view.  They had to remain frozen in a given moment of their history – their only possible use was to turn them into museums.

But not all historical buildings can be converted into museums, not least because heritage conservation is very expensive. Most of the time, the funding for conservation, maintenance and repair comes from the state. Admission tickets, the sale of souvenirs and catalogues, or providing cafeteria services can be a source of revenue, but as a rule these are not sufficient to cover costs. Government agencies often don’t have lavish budgets. Hence this new trend, all over the world, to make available sites and monuments for private events. There are always, as there should be, restrictions about the types of events allowed,   the areas that are authorized for use, the number of guests and the hours of opening.

There are many examples of this trend, worldwide. Weddings are held at the Royal Palace at Caserta, north of Naples, an Italian monument inscribed on the World Heritage List; at the Schönbrunn Palace, also protected by UNESCO; at the Belvedere Palace and Museum  in Vienna, Austria; and at the Rodin Museum or the house of Victor Hugo, in Paris. You can even rent the Palace of Versailles, the iconic French World Heritage site, for specific types of events.

In the Americas, we have the case of Bogotá, in Colombia. The Manzana cultural district in the historical centre, includes several important museums housed in colonial buildings that can be hired for private events outside of museum opening hours. In the United States, Mount Vernon, the residence of George Washington, near Washington DC, has a very special place in the country’s history – but it can easily be booked on the internet for an evening.

Are there other advantages to renting out these spaces, besides fundraising?

Opening up these spaces for private events can be beneficial at a cultural level. These events often serve to attract a different kind of public unfamiliar with heritage sites – allowing them to discover the place, which may encourage them to return to explore the site more deeply.

Several international documents stipulate that heritage must fulfil a function of public utility. The Norms of Quito, formulated in 1967 by the International Council on Monuments and Sites (ICOMOS), emphasize the economic value of heritage, suggesting that historic monuments can be considered tourist attractions and like natural resources,  can contribute to a nation’s economic development. This was the first major document on Latin American monumental heritage. We have therefore known for over fifty years that heritage is not just a cultural resource, but also an economic one. It generates income that should contribute  to its own conservation.

The UNESCO Villa Ocampo Observatory allows some of its facilities to be hired. What do you think of the way we manage this activity?

Villa Ocampo has a very effective protocol for the use of the place – a zone system defines which areas can be used and under what conditions. For instance, private events are not permitted in the heritage rooms.

The Argentinian writer Victoria Ocampo did not see her house as a museum, but as a place that was full of life, where she received guests and held meetings and receptions. Today when the site is rented, a piece of this history is being perpetuated.

Villa Ocampo, or UNESCO in Argentina

An architect and urban planner, Alfredo Conti (Argentina) was Vice-President of the International Council on Monuments and Sites (ICOMOS) from 2010 to 2017. He is currently Academic Director of the Post-graduate Course on Heritage and Sustainable Tourism, UNESCO Chair for Cultural Tourism in Buenos Aires. Conti is also a researcher on the Scientific Investigations Commission of the Province of Buenos Aires, and director of the Institute of Research on Tourism at La Plata University.