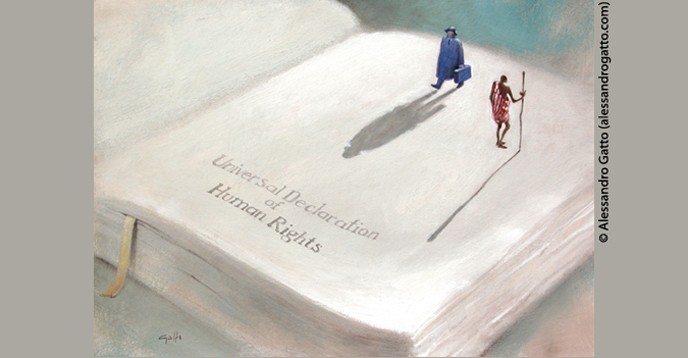 Universal Declaration of Human Rights, by the Italian illustrator and painter Alessandro Gatto.

How can individual rights be reconciled while respecting the cultural sensibilities of different human groups? For the American anthropologist, Melville J. Herskovits (1895-1963), this is the main difficulty facing the formulation of a world declaration of human rights. He elaborates on this dilemma in this excerpt from the text entitled "Statement on Human Rights", which he sent to UNESCO in 1947 in response to UNESCO’s survey on the philosophical foundations of human rights.

The problem faced by the Commission on Human Rights of the United Nations in preparing its Declaration on the Rights of Man must be approached from two points of view. The first, in terms of which the Declaration is ordinarily conceived, concerns the respect for the personality of the individual as such, and his right to its fullest development as a member of his society. In a world order, however, respect for the cultures of differing human groups is equally important.

These are two facets of the same problem, since it is a truism that groups are composed of individuals, and human beings do not function outside the societies of which they form a part. The problem is thus to formulate a statement of human rights that will do more than just phrase respect for the individual as an individual. It must also take into full account the individual as a member of the social group of which he is a part, whose sanctioned modes of life shape his behaviour, and with whose fate his own is thus inextricably bound.

Because of the great numbers of societies that are in intimate contact in the modern world, and because of the diversity of their ways of life, the primary task confronting those who would draw up a Declaration on the Rights of Man is thus, in essence, to resolve the following problem: How can the proposed Declaration be applicable to all human beings, and not be a statement of rights conceived only in terms of the values prevalent in the countries of Western Europe and America? [...]

The disintegration of human rights

Over the past fifty years, the many ways in which man resolves the problems of subsistence, of social living, of political regulation of group life, of reaching accord with the Universe and satisfying his aesthetic drives has been widely documented by the researches of anthropologists among peoples living in all parts of the world. All peoples do achieve these ends. No two of them, however, do so in exactly the same way, and some of them employ means that differ, often strikingly, from one another.

Yet here a dilemma arises. Because of the social setting of the learning process, the individual cannot but be convinced that his own way of life is the most desirable one. Conversely, and despite changes originating from within and without his culture that he recognizes as worthy of adoption, it becomes equally patent to him that, in the main, other ways than his own, to the degree they differ from it, are less desirable than those to which he is accustomed. Hence valuations arise, that in themselves receive the sanction of accepted belief.

The degree to which such evaluations eventuate in action depends on the basic sanctions in the thought of a people. In the main, people are willing to live and let live, exhibiting a tolerance for behaviour of another group different than their own, especially where there is no conflict in the subsistence field. In the history of Western Europe and America, however, economic expansion, control of armaments, and an evangelical religious tradition have translated the recognition of cultural differences into a summons to action. This has been emphasized by philosophical systems that have stressed absolutes in the realm of values and ends. Definitions of freedom, concepts of the nature of human rights and the like, have thus been narrowly drawn. Alternatives have been decried, and suppressed where controls have been established over non-European peoples. The hard core of similarities between cultures has consistently been overlooked.

The consequences of this point of view have been disastrous for mankind. Doctrines of the "white man's burden" have been employed to implement economic exploitation and to deny the right to control their own affairs to millions of peoples over the world, where the expansion of Europe and America has not meant the literal extermination of whole populations. Rationalized in terms of ascribing cultural inferiority to these peoples, or in conceptions of their backwardness in development of their ''primitive mentality" that justified their being held in the tutelage of their superiors, the history of the expansion of the western world has been marked by demoralization of human personality and the disintegration of human rights among the peoples over whom hegemony has been established. [...]

A declaration with global influence

The problem of drawing up a Declaration of Human Rights was relatively simple in the eighteenth century, because it was not a matter of human rights, but of the rights of men within the framework of the sanctions laid by a single society. Even then, so noble a document as the American Declaration of Independence, or the American Bill of Rights, could be written by men who themselves were slave-owners, in a country where chattel slavery was a part of the recognized social order. The revolutionary character of the slogan "Liberty, Equality, Fraternity" was never more apparent than in the struggles to implement it by extending it to the French slave-owning colonies.

Today the problem is complicated by the fact that the Declaration must be of worldwide applicability. It must embrace and recognize the validity of many different ways of life. It will not be convincing to the Indonesian, the African, the Indian, the Chinese, if it lies on the same plane as like documents of an earlier period. The rights of Man in the twentieth century cannot be circumscribed by the standards of any single culture, or be dictated by the aspirations of any single people. Such a document will lead to frustration, not realization of the personalities of vast numbers of human beings.

Such persons, living in terms of values not envisaged by a limited Declaration, will thus be excluded from the freedom of full participation in the only right and proper way of life that can be known to them, the institutions, sanctions and goals that make up the culture of their particular society.

Even where political systems exist that deny citizens the right of participation in their government, or seek to conquer weaker peoples, underlying cultural values may be called on to bring the peoples of such states to a realization of the consequences of the acts of their governments, and thus enforce a brake upon discrimination and conquest. For the political system of a people is only a small part of their total culture.

Worldwide standards of freedom and justice, based on the principle that man is free only when he lives as his society defines freedom, that his rights are those he recognizes as a member of his society, must be basic. Conversely, an effective world order cannot be devised except insofar as it permits the free play of personality of the members of its constituent social units, and draws strength from the enrichment to be derived from the interplay of varying personalities.

The worldwide acclaim accorded the Atlantic Charter, before its restricted applicability was announced, is evidence of the fact that freedom is understood and sought after by peoples having the most diverse cultures. Only when a statement of the right of men to live in terms of their own traditions is incorporated into the proposed Declaration, then, can the next step of defining the rights and duties of human groups as regards each other be set upon the firm foundation of the present-day scientific knowledge of Man.

Known for his humanistic and relativistic study of culture, American anthropologist Melville J. Herskovits (1895-1963) is noted for opening up the study of the New World Negro as a new field of research. A specialist in African-American cultural and social issues, he taught at Columbia University, Howard University and at Northwestern University, Chicago, where he held the first chair of African Studies in the United States (1951).

Known for his humanistic and relativistic study of culture, American anthropologist Melville J. Herskovits (1895-1963) is noted for opening up the study of the New World Negro as a new field of research. A specialist in African-American cultural and social issues, he taught at Columbia University, Howard University and at Northwestern University, Chicago, where he held the first chair of African Studies in the United States (1951).