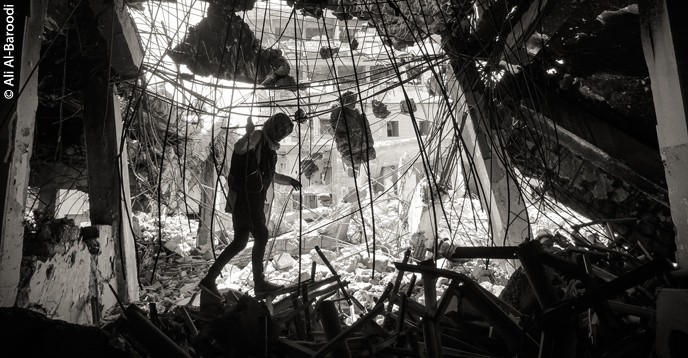 In search of books, being retrieved from the ashes in the Central Library of the University of Mosul, Iraq, torched by ISIS during their occupation of the town (2014-2016).

Iraqi novelist Inaam Kachachi describes the city she loves – Mosul the austere, Mosul the convivial, Mosul the contradictory, Mosul the wounded, bleeding to death. She tells us of her deep attachment to the ancient city of Nineveh, ravaged by history.

During a visit to the United States a few years ago,  I remembered an Arab joke. A man sentenced to death was asked what his last wish was, before the rope was put around his neck. “I’d like to learn Japanese,” he replied. We, the people of Mosul, are in a somewhat similar situation. Condemned to exile, we dream of a return which is impossible.

On the same visit, I was invited by a local Detroit radio station – run by the Iraqi community, which is quite significant in that city – to participate in one of its broadcasts. I was surprised to find that all the programmes on the radio station were in Chaldean, and I was therefore asked to speak in that language! I then had to explain that although my mother and father were Christians, they were from Mosul and, as city-dwellers, they spoke Arabic at home. Chaldean, a recent variant of Aramaic ‒ the language of Christ ‒ was reserved for the inhabitants of Christian villages on the city’s outskirts.

As a journalist, I have always written in Arabic. I know a smattering of Chaldean, just a few phrases, and verses from songs sung at ceremonies. I grew up in Baghdad and was educated there. But it is Mosul that I love the most, that I consider home. A city surrounded by vast green plains, where we went for our Easter holidays – to enjoy the gentle climate, to savor the beauty of the gardens dappled with red poppies and yellow chamomiles. I had learned from early childhood that Mosul was a city with two springs because autumn was like a second spring.

What I also learned was that Mosul was a conservative city, whose inhabitants distinguished themselves by their sense of seriousness, effort and rigor. There was no room for nonchalance. This is probably why we rarely hear the Mosul accent in Iraqi music. With the exception of the great nineteenth-century composer, Molla Uthmân al-Mawsili and the Bachir family – notably Mounir Bachir (1930-1997), one of the greatest lute-players of all time – most of Iraq’s singers, composers and songwriters come from the country’s south. These artists are recognizable by their rural accents. And though recordings of a few songs from Mosul can be found on the internet today, they can be counted on the fingers of one hand.

Was it the conservative nature of the Mosulites that made me the target of a little boy one day, who threw a stone at me, probably because I was wearing a short dress?  It was a dress that my mother had made for me, especially for Eid ‒ a red dress with a white Peter Pan collar, or a col Claudine, à la Française. And when I called a passer-by for help, the man scolded me, saying, “Go cover your legs, little girl!” The little girl in question was 7 years old and her dress was two centimeters above the knee.

But Mosul was both conservative and tolerant. Let me tell you a story from when my father ‒ to whom I owe my love and great passion for the Arabic language, its poetry and literature ‒ was a teenager. It is a story that illustrates just how civilized and tolerant Mosul used to be.

Two stories of the Koran

Of all the students at his high school, my father was the best in the Arabic language. It was customary to offer the winning student a luxurious edition of the Koran. A few days before the awards ceremony, my father found the headmaster, sitting in a horse-drawn carriage – a common means of transport in the 1930s – waiting for him in front of the school. He beckoned my father to sit beside him and they went to the town’s main bookstore. “You can choose any book you like as a prize, whatever the price,” the headmaster said. For the Christian student, the message was unambiguous. He refused the offer. The principal tried again: “Abdel-Ahad, you are a Christian, and Mosul is a conservative city. We cannot give a copy of the Koran to a student who is not Muslim.”

My father refused to budge, saying that he would not accept any other prize. The headmaster finally gave in, after making my father promise that he would accord the same respect to the holy book as if it were in a Muslim home. In the 1960s, the same scenario was repeated with my elder sister, but this time with a different outcome. A student in the Faculty of Arts at the University of Baghdad, she obtained the highest marks for her exegesis of the Koran. The head of the department summoned her and asked her to renounce the prize, in order to save him from considerable embarrassment. How could he announce that a Christian student had surpassed her Muslim classmates in this discipline? This teacher clearly did not have the same courage as the headmaster of Mosul High School, thirty years earlier.

“It’s my rib that is breaking…”

Mosul is on the Silk Road – and I am proud to tell my French neighbours that muslin (mousseline), the fine cotton fabric, originated in my hometown. In this city, the children of three great monotheistic religions, from many ethnic communities from Armenia, Turkey and the Balkans, lived together for a long time, in peace and harmony. But then, political strife began to poison the city’s atmosphere. The 1948 war between Arabs and Jews triggered the departure of tens of thousands of Jews from Mosul (who, even today, have kept their very particular Mosul accents, wherever they moved).

The Republic succeeded the monarchy in Iraq, against a backdrop of rivalries between political parties, and Mosul was not spared the bloodbaths caused by the fights between nationalists and communists. Then came the Gulf Wars and the American occupation. The entire country fell into chaos. But the worst was yet to come, with the occupation of Mosul by ISIS and what followed – particularly the expulsion of Christians and their exodus. The whole world watched helplessly as museums, ancient statues and monuments, bearing witness to nearly seven thousand years of civilization, were destroyed.

On that day in June 2017 as I watched the destruction of the iconic Al Hadba (the hunchback) minaret of the Great Mosque of al-Nuri, on TV, I could not hold back my tears. This minaret, leaning like the Tower of Pisa, was the symbol of the city – it was on postcards, like the Eiffel Tower, the Statue of Liberty, or the Egyptian Pyramids. I remembered a poem written in dialectal Arabic by my former professor, the poetess Lamiâa Abbas Amara, the day that Baghdad’s suspension bridge, the most beautiful in the capital, was bombed by American warplanes. “It’s my rib that is breaking, not the bridge”, she wrote. That’s exactly how I felt when Al Hadba was destroyed.

But above all, it is human beings, who matter more than stones, who are the victims of dispersion, of extermination. It is with immense sadness that I realize, day after day, that I had anticipated this in my novel, Dispersés (2013). The exodus continues, and Iraq, particularly Mosul, is being emptied of its Christians.

Throughout my 60 years, I have considered myself an Iraqi. I have always refused to be called Christian, to be confined to a single community. When my books were translated into French, journalists asked me if I was a Shia or Sunni Muslim – I mocked their naïveté and refused to answer. But today, I proclaim my identity loud and clear – both in the interviews I give, and in my writing. Not in a communitarian spirit, but to testify to the luminous period during which I lived in Iraq – the country where I was born, where I studied, loved, where I started my family, where my eldest son was born – without anyone ever thinking of asking me what my religion was.

Today, in Paris, my adopted city, I take great pleasure in reminiscing about Iraq with  Safiya, a writer from Mosul who is over 80, and who emigrated like me. She tells me about her incredible life in Mosul in the last century. Although she was the daughter of a prominent imam, she dressed like her city friends in the latest Parisian fashion and had a full social and intellectual life. As female students attending a medical school founded in the 1960s, they played tennis with their male classmates and wore white shorts. Who could imagine such a scene today?

UNESCO's initiative to revive the spirit of Mosul

Novelist and journalist Inaam Kachachi (Iraq) has lived in France since 1979, when she came to the Sorbonne to study for a PhD. She is the author of several novels, including Dispersés (2013), the French version of which won the 2016 prize for Arabic literature, awarded by the Institut du Monde Arabe and the Fondation Lagardère; Si je t’oublie, Bagdad (2003) translated into French (in 2009); Paroles d'Irakiennes: le drame irakien écrit par des femmes (originally published in French, 2003).