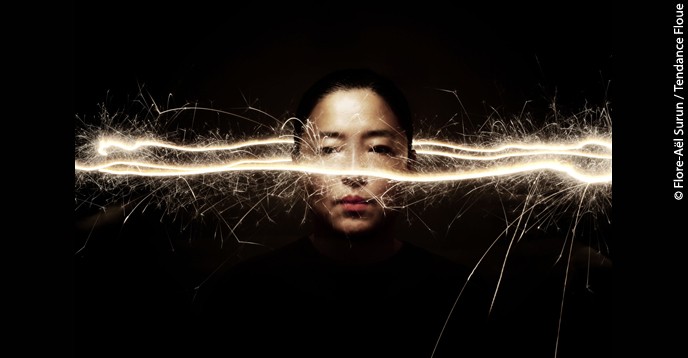 A photograph from the series Visible/Invisible, by French photographer Flore-Aël Surun.

“The heathens could always deny the immortality of the soul, and yet the believers will not stop to see it as a certitude. Even if the pagans were right today, the power of faith the believers have would one day make the soul immortal,” wrote Austrian-American composer Arnold Schoenberg (1874-1951) in his response to UNESCO's survey on the philosophical foundations of human rights, under the title, “The Rights of Man”, sent from Los Angeles on 21 July 1947, and from which we publish large excerpts. “The same will apply to human rights, if we do not cease to believe in their existence, even though they should remain unknown and ill-defined for a long time to come," he added.

It is sad to admit that most men consider it their right to challenge the rights of others and even fight them. What is even sadder is that the present aspect of the world does not offer any hope for improvement in the near future.

This should not however stifle our aspiration for a world where the sanctity of the Rights of Man would be an intangible evidence for everybody. Humanity has never been able to access this kind of happiness unless a growing number of individuals pursued with fervour, an ideal conceived a long time ago, until its accomplishment. All the progress of social thought or social sentiment that allowed for a life together without any discord could have been achieved only through the strength of such aspirations.

We must not give that up.

The heathens could always deny the immortality of the soul, and yet the believers will not stop to see it as a certitude. Even if the pagans were right today, the power of faith the believers have would one day make the soul immortal.

It will be the same with the Rights of Man if we do not cease to believe in their existence, even though they may remain unknown and ill-defined for a long time.

If there is a difference between the common law, the civil law and the rights of man, it should be limited to this:

a) The rights of man seek to balance powers and resistance even in areas where the common law has not yet found solutions.

b) We must find a minimum of rights valid for all peoples and all races.

The task of formulating a Declaration of the Rights of Man clearly lies with an organization that purports to be at the “vanguard” of the progress of the common law.

The law proposes to establish a balance only to a small degree. In reality, it is almost always the expression of power. Certainly, while the rights of the weak were able to find a foothold in the world to some extent, they have done that by way of power. When overcome by pity, we admit to unintended consequences; the opposite occurs: we have sparked a Reaction.

The difficulty of defining the rights lies in the opposition of interests we’re about to protect. Galileo who questioned Genesis, and the Church, which does not admit any violation of God's word, both need equal protection and both have equal rights. In our vaunted civilization, the burning at the stake is no longer in use. Everyone can say what he wants to a certain degree (let’s not forget, however, the restriction “to a certain degree”). Pasteur and Zola did not have to suffer in their body, but in their spirit, and the doctor who discovered a new diabetes theory a decade too soon has lost nothing but a few clients.

War, the mother of all things, forced the world to adopt new methods. Annoying or excessively uninhibited opinions are exterminated along with their supporters. We diminish the first, we lay the latter all bare. The generals like the rest of them. We ignore all shame, because “the Law is what benefits Germany”. Everything else is “the rights of man”.

There is no certainty in a battle that 51% would outweigh 49% of the combatants, but in an election, these 51% take power over the minority, the subjugated and the enslaved.

We recognize the rights of the minority when the balance of power is 98% against 2%. But a minority of 49% has no longer any rights. Often, it doesn’t even have civil rights.

Yet we never forget these tiny minorities that are reduced to a single representative, something that may occur even in the countries of our civilization – five or ten examples per century at the most.

A civilization and a culture based exclusively on scientific knowledge should put a stop to their progress in order to balance competing interests. After long centuries, no doubt, because powerful forces oppose it; moreover, all the interests involved are either unknown or fail to be revealed in time. But the study of rights has more refined instruments at its disposal and more requirements it must meet.

Which leads us to the protection of honour.

The Archbishop could afford to slap Mozart in the face, without wondering whether he entered the history of music by that action.

Who could guess then that the sense of honour associated with the artist would assume such proportions in the future? Who could have predicted that this or that artist would be disgusted with life after having surprised himself with unworthy thoughts?

But who could have, on the other hand, envisioned that the injuries the critics dealt Wagner, Ibsen, Strindberg, Mahler, and others would be ultimately considered a mark of honour? Without such enemies we could not be truly great.

Any scientist, engineer, inventor, poet, painter, musician, etc., who benefits from the efforts of a predecessor (whether he himself invented something or is content to imitate or use what has been done before), contributes to the progress of his specialty. We must not underestimate the sincere disciples or overestimate the creators. No one can be vain enough to be in debt all to oneself.

Should we, however, tolerate that the users always receive a higher reward than the inventor from whom they took a loan they will never repay? This is basically a problem of secondary importance.

However, it often happens that the true inventor is scammed by the imitator, when the latter knew how to make himself a skilful propaganda. There we have a falsification of the spiritual history – but who, besides the offended, takes an interest in that?

A gold mine, an oil well, a store, a bank, a factory, or even a picture, cannot be taken away from the most distant descendants of its original owner. But for the works of mind and art, the property right is exercised only for a specified period, during which the act of stealing the work from the producer or the creator is considered a misdemeanour; not, truth be told, because theft is immoral and dishonourable in itself, but because it undermines powerful and fearsome interests. But after that specified period, the competition forces the publisher to sell the work cheaper, which will not prevent him from making an honest profit, since he does not have to pay royalties anymore. Indeed, after that period, the work belongs to the so-called community, but in reality, to the exploiters. Therefore, you will no longer incur punishment when partaking in what is not yours – but that doesn’t mean you have not committed a theft. And the only title that the community owns in this case is the one that gives it its strength. It is foolish to drop the works of mind and art into the public domain, not only from a moral, but also an economical, point of view, because the interest the society has for these works is too limited to justify the fact that we expose the descendants of a man of genius to the same misery which he himself had to suffer.

It is tragic that the rights of man are, like democracy, unable to defend themselves against attacks and against destruction. All that could be undertaken on behalf of these rights would indeed undermine the rights of the aggressor. Just as everything that tends to consolidate democracy is undemocratic.

That leaves us only with having recourse to persuasion.

It seems that the rights of man should be limited to a smaller number of claims that would not render this concept too ambitious.

Most forms of belief are exclusive and antagonistic, sometimes even combative, provocative, aggressive. It would be a suicide for them to be tolerant. Let’s think, for example, about the communist or fascist States, where belief is a governing instrument.

The Ten Commandments are undoubtedly one of the first Declarations of the Rights of Man that have ever been formulated. They guarantee the right to life and the right to property; they protect the marriage, oath-taking and labour, but, as there is only one God, they deny any freedom of belief.

“How can I truly love the good without hating the evil?” Strindberg asked himself. Wherefrom the desire and even the obligation to fight evil.

This is why some believe they must fight “bourgeois” art and others, the Palestinian style, which is foreign to our race and began with the great Adolf  Loos.

But what is then to become of the human rights of those who believe in vanquished art forms or ideas?

To all appearances, music only expresses musical data in its language, or, as most aesthetes think, only data that incites the senses or the imagination. Let’s forget the jokes of Richard Strauss, who said, “Move a pencil from one place to another and I will express it in music”. That is not the language of the musician who unconsciously reveals himself, formulating thoughts that he would shudder to hear – if he did not  know that no one would be able to discover the hidden meaning of his words.

But one day, the grandchildren of our psychologists and our psychoanalysts will have managed to decipher the language of music. Woe, then, to the improvidents, who thought to disseminate so thoroughly their innermost thoughts and who will now open to the profane, the most secret recesses of their consciousness.

Woe to you then, Beethoven, Brahms and Schumann, and to all of you, the so far “unknown,” who will fall into such hands; you who have not used the human right to express yourselves freely only to better silence your thoughts.

The right to silence one’s thoughts, doesn’t it deserve to be protected? […]

What do religions say about this? […]

We have there serious problems that could turn us into pessimists.

Nevertheless, we must not give up our desire to bestow a sacred and universal character to the rights of man.

We have in our hearts the strength of desire combined with the intensity of creation.

One of the most influential and innovative composers of the twentieth century, Austrian-American composer Arnold Schoenberg (1874-1951) created new methods of musical composition involving atonality. Like many other Jewish artists, Schoenberg emigrated to the United States in 1933. He taught at the Malkin Conservatory in Boston, and moved to California in 1934, where he spent the rest of his life. He held major teaching positions at the University of Southern California and the University of California, Los Angeles, and became a US citizen in 1941.