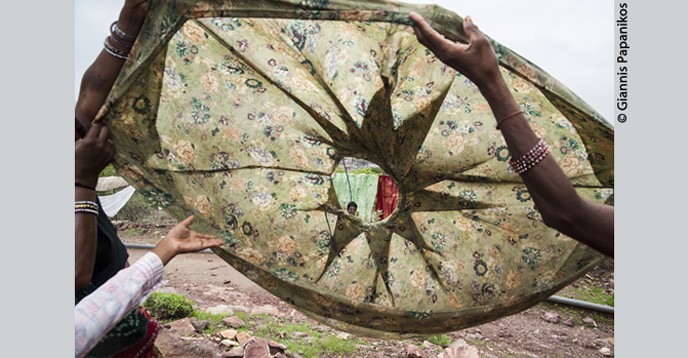 A photo from the series, In Praise of India, by Greek photographer Giannis Papanikos.

Criticizing the Western emphasis on reason and science that marked the emergence of European human rights doctrines, the Indian political scientist S.V. Puntambekar was of the opinion that “we shall have to give up some of the superstitions of material science and limited reason, which make man too much this-worldly, and introduce higher spiritual aims and values for mankind.” He focused on the spiritual nature of human beings in his text “The Hindu Concept of Human Rights”, sent in May 1947 in response to UNESCO’s survey on the philosophical foundations of human rights. Excerpts follow.

The proper study of mankind is man. There is something more in man than is apparent in his ordinary consciousness and behaviour under a given system of environment – something which frames ideals and values of life. There is in him a finer spiritual presence which makes him dissatisfied with merely earthly pursuits. The ordinary condition of man is not his ultimate being. He has in him a deeper self, call it soul or spirit. In each being dwells a light and inspiration which no power can extinguish, which is benign and tolerant, and which is the real man. It is our business to discover him, protect him and see that he is utilized for his own and humanity’s welfare. It is the nature of this man to search for the true, the good and the beautiful in life, to esteem them properly and to strive for them continuously.

Then we must note that there is also an incalculable element in the human will, and an endless complexity of human nature. No system, no order, no law can satisfy the deep and potential demands of a great personality, be they religious, political, social or educational. Men are often endowed with great potential energy and creative power which cannot be encased within the bounds of old formulas and doctrines. No fixed discipline can suit the developing possibilities of new human manifestations in the psychological, ethical or spiritual fields. No system can satisfy the growing needs of a dynamic personality. There always remains something unthought of and unrealized in the system. Hence we want freedom for man in the shape of human freedoms.

There is always a tendency for new values and new ideals to arise in human life. No ready formulas and systems can satisfy the needs and visions of great thinkers and of all peoples and periods. Freedom is necessary because authority is not creative. Freedom gives full scope to developing the personality and creates conditions for its growth. No uniformity or conformity or comprehension of all aspects of life will be helpful. The present centralization of all authority, its bureaucracy and party dictatorship, its complexity and standardization, leave little scope for independent thought and development, for initiative and choice. [...]

Can we be aware of a call for national freedom and for human freedom, when we are so rigid, inflexible, fanatic and exclusive in our political, religious, cultural and socio-economic outlook? Not having succeeded in disposing our rules and systems on all countries and continents, some of us still harbour feelings of superiority and hatred, coercion and dominance against our neighbours.

Therefore first let us “be men”, and then lay down the contents, qualities and interrelations of human freedoms. We must respect humanity and personality, tolerate our differences and others’ ways of internal and external group behaviour, and combine to serve one another in calamities and in great undertakings.

To talk of human rights in India is no doubt very necessary and desirable, but hardly possible in view of the socio-cultural and religio-political complexes which are so predominant today. There are no human beings in the world of today, but only religious men, racial men, caste men or group men. Our intelligentsia and masses are mad after racial privileges, religion, bigotry and social exclusiveness. In short, we are engaged in a silent war of extermination of opposite groups. Our classes and communities think in terms of conquest and subjugation, not of common association and citizenship. There is at present a continuous war of groups and communities, of rulers and the ruled, in our body politic and body social, from which all conception of humanity and tolerance, all notion of humility and respect, have disappeared. Bigotry, intolerance and exclusiveness sit enthroned in their stead.

The world is mad today. It runs after destruction and despotism, world conquest and world order, world loot and world dispossession. The enormous hatred generated against human life and achievements has left no sense of humanity or human love in the world politics of today. But shall we renounce “being men” first and always? What we want is freedom from want and war, from fear and frustration in life. We also want freedom from an all-absorbing conception of the state, the community and the church coercing individuals to particular and ordered ways of life. Along with this, we desire freedom of thought and expression of movement and association, of education and of expansion in the mental and moral spheres. In any defined and ordered plan for living, we must have the right of non-violent resistance and autonomy, in order to develop our ideas of the good human life.

For this purpose, we shall have to give up some of the superstitions of material science and limited reason, which make man too much this-worldly, and introduce higher spiritual aims and values for mankind. Then on that basis, we shall have to organize our social life in all its aspects. We want not only the material conditions of a happy life but also the spiritual virtues of a good life. Man’s freedom is being destroyed by the demands of economic technocracy, political bureaucracy and religious idiosyncrasy.

Great thinkers like Manu and Buddha have laid emphasis on what should be assurances necessary for man and what should be the virtues possessed by man. They have propounded a code, as it were, of  ten essential human freedoms and controls or virtues necessary for a good life. They are not only basic, but more comprehensive in their scope than those mentioned by any other modern thinkers. They emphasize five freedoms or social assurances and five individual possessions or virtues.

Human freedoms require as counterparts, human virtues or controls. To think in terms of freedoms without corresponding virtues would lead to a lopsided view of life and a stagnation or even a deterioration of personality, and also to chaos and conflict in society. This two-sidedness of human life, its freedoms and virtues or controls, its assurances and possessions must be understood and established in any scheme for the welfare of man, society and humanity. Alone, the right to life, liberty and property or pursuit of happiness is not sufficient; neither, alone, is the assurance of liberty, equality and fraternity. Human freedoms and virtues must be more definite and more comprehensive if they are to help the physical, mental and spiritual development of man and humanity.

In order to prevent this open and latent warfare of mutual extermination – national and international – we must create and develop a new man or citizen assured and possessed of these tenfold freedoms and virtues which are the fundamental values of human life and conduct. Otherwise our freedoms will fail in their objects and in their mission to save man and his mental and moral culture from the impending disaster with which the whole human civilization is now threatened by the lethal weapons of science and the inhuman robots of despotic and coercive powers and their ideologies and creeds.

We in India also want freedom from foreign rule and civil warfare. Foreign rule is a damnable thing. This land has suffered from it for hundreds of years. We must condemn it, whether old or new. We must have self-rule in our country under one representative, responsible and centralized system. Then alone we shall survive.

I know that men who are devoted to and dominated by rigid ideas of cultures and religions cannot feel the call of national or human freedom. But we cannot give up higher objectives and aspirations for their sake and their prejudices.

An Indian academic educated at Oxford University, S.V. Puntambekar taught at Banaras Hindu University and Nagpur University. He is the author of several books on politics and foreign policy.