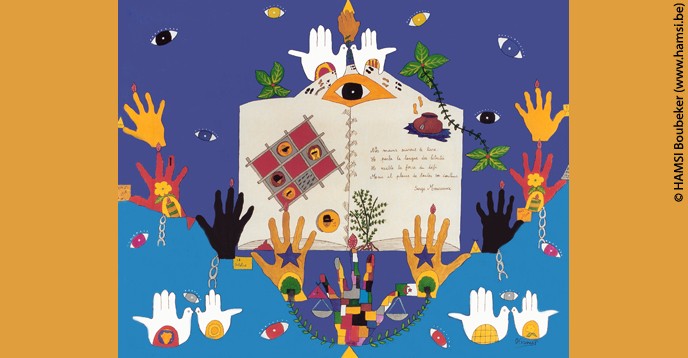 “Any attempt by the United Nations to formulate a Declaration of Human Rights in individualist terms would quite inevitably fail,” wrote the British academic and politician Harold J. Laski (1893-1950). According to him, to go beyond these individualistic terms, the state must intervene to ensure a certain number of social rights for its citizens. He elaborated on this idea in his response to UNESCO's survey of the philosophical foundations of human rights, sent from London in June 1947, under the title “Towards a Universal Declaration of Human Rights”. An excerpt follows.

It is of the first importance, if a document of this kind is to have lasting influence and significance, to remember that the Great Declarations of the past are a quite special heritage of Western civilization, that they are deeply involved in a Protestant bourgeois tradition, which is itself an outstanding aspect of the rise of the middle class to power, and that, though their expression is universal in its form, the attempts at realization which lie behind that expression have too rarely reached below the level of the middle class.

“Equality before the law” has not meant very much in the lives of the working class in most political communities, and still less to Negroes in the Southern states of the United States. “Freedom of Association” was achieved by trade unions in Great Britain only in 1871; in France, save for a brief interval in 1848, only in 1884; in Germany only in the last years of the Bismarckian era, and then but partially; and, in a real way, in the U.S.A. only with the National Labour Relations Act of 1935; this Act itself is now in serious jeopardy in Congress. All rights proclaimed in the great documents of this character are in fact statements of aspiration, the fulfilment of which is limited by the view taken by the ruling class of any political community of its relations to the security of interests they are determined to maintain.

It must be remembered, further, that one of the main emphases which have underlain past Declarations of Rights has been the presumed antagonism between the freedom of the individual citizen and the authority of the government in the political community. It is not merely that the rights of the citizens have been conceived in individualist terms, and upon the political plane. There is the deeper problem that has arisen from the unconscious, or half-conscious, assumption of those who wrote the great documents of the past that every addition to governmental power is a subtraction from individual freedom. Maxims like Bentham’s famous “each man is the best judge of his own interest” and that “each man must count as one and not more than one”, have their roots in that pattern of social organization so forcibly depicted by Adam Smith: in which, under any “simple system of natural liberty”, men competing fiercely with one another in economic life are led, each of them, “by an invisible hand to promote an end which was no part of his intention”, and that end, by some mysterious alchemy, is the good of the whole community.

Even if it be argued – and it is at least doubtful whether it can be argued – that this liberal pattern was ever valid, it is certainly not valid today. There are vital elements in the common good which can only be achieved by action under the state-power – education, housing, public health, security against unemployment; these, at a standard acceptable to the community in an advanced society in Western civilization, cannot be achieved by any cooperation of citizens who do not exercise the authority of government. It becomes plain, on any close analysis, that so far from there being a necessary antagonism between individual freedom and governmental authority, there are areas of social life in which the second is the necessary condition of the first. No statement of rights could be relevant to the contemporary situation which ignored this fact. [...]

In the light of such considerations as these, any attempt by the United Nations to formulate a Declaration of Human Rights in individualist terms would quite inevitably fail. It would have little authority in those political societies which are increasingly, both in number and in range of effort, assuming the need to plan their social and economic life. It is, indeed, legitimate to go further and say that if the assumptions behind such a Declaration were individualistic, the document would be regarded as a threat to a new way of life by the defenders of historic principles which are now subject to profound challenge. Its effect would be to separate, and not to unify, the groping towards common purposes achieved through common institutions and common standards of behaviour which it is the objective of such a Declaration to promote.

Nothing, in fact, is gained, and a great deal may be lost, unless a Declaration of this character notes the fact of important ideological differences between political societies and takes full account of their consequences in the behaviour both of persons and institutions. To attempt to gloss them over would be to ignore completely the immense changes they involve in the attitude that a socialist society, on the one hand, even a society beginning to embark on socialist experiment, and a capitalist society, on the other, is likely to take to things like private property, law, both civil and criminal, the services of health and education, the possibility of living, between certain ages, without the duty to earn a living, the place of the arts – of, indeed, culture in its widest sense – in the society, the methods of communicating news and ideas, the ways in which citizens adopt a vocation in life, the conditions of promotion in the vocation adopted, and the relation of trade unionism to the process of economic production. [...]

The weight of the ruling class

It is difficult, moreover, to avoid the conclusion that was aptly formulated by Marx when he said that “the ruling ideas of an age are the ideas of its ruling class”. From that conclusion it follows that, historically, previous Declarations of Rights have in fact been attempts to give special sanctity to rights which some given ruling class at some given time in the life of a political society it controlled felt to be of peculiar importance to the members of that class. It is no doubt true that they were often, even usually, written out in universal form; perhaps even their claim to the status of universality gave them a power of inspiration beyond the area in which they were intended to be effective. But it remains generally true that in their application, the status of universality was always reduced to a particularity made, so far as possible, to coincide with what a ruling class believed to be in its interest, or what it regarded as the necessary limits of safe concession. [...]

Towards a Declaration that is bold and concrete

An International Declaration of Human Rights which was based on these premises and built upon these conclusions, to which men and women all over the world might look for a programme of action, would be a valuable stimulus to the recognition of the need for reforms, any long denial of which is likely to result in violent revolution here, to violent counter revolution there, and perhaps, even more grimly, to international conflict which may easily assume the character of a global civil war.

To provide the appropriate inspiration, such a Declaration would have to be both bold in its general character and concrete in its detailed conduct. It would have to take account rather of the possibilities which are struggling to be born than of the traditions that are dying before our eyes. It would be better to have no Declaration than one that was half-hearted and lacking in precision, or one which sought an uneasy compromise between irreconcilable principles of social action. A Declaration such as is proposed would do more harm than good unless it was issued in the confident expectation that the members of the United Nations gave to it an unquestionable faith and respect.

An age like our own, which has seen the impotence of the League of Nations, the contemptuous disregard of the Kellogg-Briand Pact and the cynical violation of international law and customs, and has lived under the barbarous tyranny of regimes which made torture and wholesale murder the sanctions of their policy, cannot afford another failure of so supreme a significance as this failure would mean. They have no right to offer hope to mankind who are not prepared to organize the essential conditions without which it has no prospect of being fulfilled. The next betrayal by statesmen of what the common man regards as the basis of his self-respect as a human being will be the prelude to a disaster this civilization is unlikely to survive.

A British political scientist and academic, Harold J. Laski (1893-1950) was a prominent member of the British Labour Party. He taught at McGill University in Canada, Harvard University in the United States, and the London School of Economics and Political Science in the United Kingdom. He was also the author of numerous books on democracy and socialism. Laski was one of UNESCO's most ardent and valued collaborators on several of its early projects.