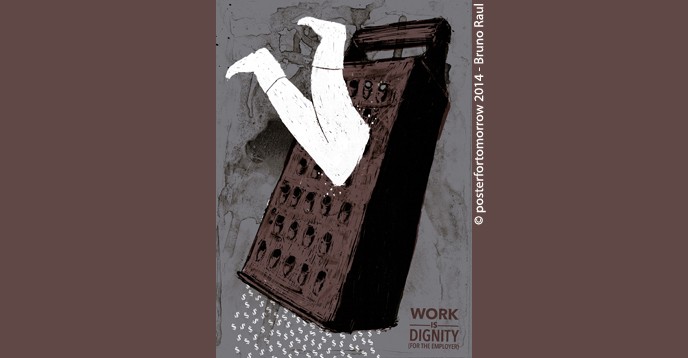 Work is Dignity (for the employer), a poster by Bolivian artist Bruno Raul Rivera Catacora for the Work Right! competition, organized in 2014 by the human rights non-profit, 4tomorrow.

The right to employment, to social security, to a minimum wage, to the freedom of assembly and association, to free access to employment. These are the essential elements to integrate into a charter of human rights, in order to imagine a new kind of society, according to the British economist, Maurice Dobb (1900-1976). He elaborated on this idea in this text which he sent in 1947, in response to UNESCO’s survey on the philosophical foundations of human rights.

Clearly, the notion of a declaration of rights which shall hold true of all times and conditions is too abstract to be tenable in this age, which is more conscious than its forbears of the historically-relative character of social and economic problems. Problems, needs, rights and duties only have a meaning within the framework of a particular set of social institutions and social relations – institutions and relations which are subject to historical change, and in the contemporary world are continually changing before our eyes. Yet declarations of rights can have a function in summarizing the aspirations of progressively-minded persons in a given age, confronted with the given situation and a given group of problems – as pointers to the direction in which efforts at social advance must be turned.

Foremost among the requirements of any new society must be the attainment of full employment. This is nowadays a commonplace. But it has not always been so; and there are even some today who resist its attainment, or if they accept the ends, will not accept the means. Until recently, unemployment was considered to be either an inevitable accompaniment of so-called “free society” or even a desirable reserve without which a capitalist economy would lack a vital instrument of flexibility and of discipline. It is of interest in this connection that the 1936 Constitution of the Union of Soviet Socialist Republics (U.S.S.R.) included as the first among its “basic rights of citizens”, “the right to work” ( Article 118).

To banish poverty and want

Secondly, there is the need for guaranteeing a certain minimum subsistence for all, sufficient to banish poverty and want. This has two aspects. First is the guarantee through a comprehensive system of social security against loss of earning power from any of the risks to which the wage-earner is prone: risks arising from accident, sickness or old age. Second is a guarantee of certain minimum terms and conditions of employment: a prohibition of any contract of employment which fails to secure a certain minimum standard of earnings. This is not only a matter of aspirations: it is a matter also of attainment; while the standard that is regarded as the minimum standard – as “a living wage”– is itself subject to change from one generation to the next and varies with the level of social and historical development in different parts of the world.

Over large parts of the world, any desirable minimum standard is at present unattainable (even with radical alterations in the distribution of income) owing to the low level of productivity per man-hour. Here the practical realization of this “right” requires a planned development of these regions as a prior condition (development which is systematically integrated under public auspices over a wide area, and not left to laissez-faire; and preferably development that is financially assisted from outside, provided that undesirable political conditions are not attached to such assistance).

A guarantee for everyone

Thirdly, it is necessary that rights of assembly and of organization should be guaranteed to all employed persons: moreover, that this right of organization should be made actual by extension of the right to all representative workers’ organizations to negotiate regarding the terms of their employment and to be represented on bodies responsible for controlling the conditions of work. It is manifestly inconsistent with the dignity of man that labour should be regarded (as hitherto) as a mere hired factor of production, excluded from any voice in the conduct of industrial policy.

Fourthly, it is necessary that employment and access to the means of livelihood should be unrestricted by any considerations of race, creed, opinion or membership of any legal organization.

It can reasonably be held that ownership of the means of production (including land) by private individuals on such a scale as to imply that independent access to these means of production is barred for a substantial section of the community, represents an infringement of the economic rights of man in any full sense of the term. Where ownership of land and productive equipment is concentrated in the hands of a class, the remainder of the community is deprived of the possibility of a livelihood except as hired servants to the former – a situation which involves a substantial inequality of rights, de facto, and in an important sense, involves a deprivation of freedom from the class of non-owners.

Such an interpretation of human rights is, of course, incapable of being reconciled with Capitalism as an economic system. In a more modified form, however, this interpretation could be held to debar the existence of private-owned monopolies which dominate whole industries and control the production and sale of essentials of human existence or essential raw materials and requisites of production, and which are accordingly in a position to dictate their terms to private consumers or to other producers.

A distinguished Marxian economist, the British academic Maurice Dobb (1900-1976) taught at Cambridge University, in the United Kingdom. He joined the Communist Party of Great Britain in 1920, and was one of the founders of its Historians’ Group.