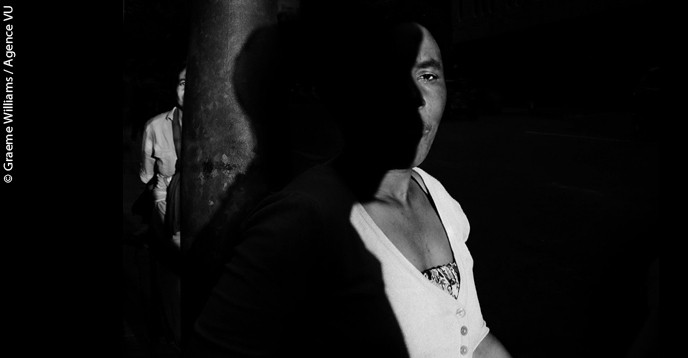 A woman waiting for the bus after work, a photo from the Never again series by South African photographer Graeme Williams. Johannesburg, 2013.

Twenty-five years after attaining democracy, South Africa has taken giant strides towards forging a united nation. But overcoming racism and realizing Nelson Mandela’s vision of a nation that belongs to all who live in it, remains a wonderful ideal – which still requires a lot of work, according to Justice Jody Kollapen. Both an arbitrator and a victim of racist cases (he was refused a haircut as recently as in October 2003!), this human rights defender maintains that there is enough goodwill to build on Mandela’s vision.

Twenty-five years after South Africa’s hard-won freedom, has the country made progress in the fight against racism?

I think that the answer to that must be yes, simply because the racial divides that characterized South Africa during apartheid were quite stark, suspicions because of race ran deep, and instances of gratuitous violence against black people had almost reached a level of social acceptability. Things have changed dramatically since then. But that does not mean that there aren’t any serious instances of racism. The difference is that when these happen, large numbers of South Africans, black and white, are outraged. In addition, there is a legal framework to deal with racism.

Are the legislative measures proposed in the new bill to criminalize acts of racism  necessary to promote a united South Africa?

Ideally, we would like to combat racism through voluntary initiatives, appealing to the better sense of people. Historically, most South Africans would agree that in the absence of criminal sanctions, the new laws could be important, giving license to act strongly against those who think they can get away with paying a fine, since no current processes provide for criminal action.

Based on a legal and constitutional framework where we are willing to send someone to jail for stealing a loaf of bread, why, considering the hierarchy of seriousness of the acts, do we not send someone to jail for racist behaviour? You can't be racist and pay your way out of it.  The idea is to use the law to deal with extreme cases – one hopes it is used sparingly.

Analysts refer to racism as an unresolved problem, inherited from the past, which the nation has failed to adequately address.  What is your view?

I agree that the Truth and Reconciliation Commission (TRC) has never dealt with the issue of racism. It dealt with crimes of apartheid but not apartheid as a crime. The large majority of South Africans who were victims and perpetrators never appeared before the TRC to talk about racism under apartheid. Sadly, the TRC may have got caught up with the romantic notion of reconciliation without addressing apartheid, discrimination – and the fact that there can be no reconciliation without social and economic transformation. It was a missed opportunity. But I don’t think it can be addressed via legislative means.

What must be done to ensure that a sense of unity prevails in South Africa?

As long as South Africa remains the most unequal society in the world, and as long as we trace that back to having its roots in colonialism and apartheid, we are not going to reach that sense of unity. Even if we do not succeed in creating the egalitarian society which some of us wish for, we can certainly achieve a more equal society. But for that to happen, we need to be mature in the debates on issues such as resources, affirmative action, access to land, and we can’t be defensive. If we don’t transform society in a meaningful way, that sense of unity may evade us.

In the 8 May 2019 elections, some politicians used race as an election tool. What is your opinion on their conduct?

Unfortunately, race continues to define our social and economic order, so it defines the political order as well. It is easy to use the notion of race  to stir up anxiety. This is not unique to South Africa – we’ve seen it in Europe and the United States as well. But given our history, it is easy to evoke feelings of insecurity among people. When people have these feelings, I’m not sure that they are able to make the right electoral choices.

I hope we reach a level of maturity to deal with this. The long-term damage caused by the use of race as a campaign tool may not be quantifiable, but it serves to divide, and runs counter to the argument of the united nation we seek.

In his inaugural speech on 10 May 1994, Nelson Mandela called for reconciliation and an end to racism. Have we made progress towards achieving his vision for South Africa?

We’ve made considerable progress. Naked acts of racism still occur, but they’re not the norm, and attract universal condemnation, which is very good. However, I see a real problem in the fact that there are no anti-racism campaigns in schools, public or private. We have programmes to deal with gender-based violence, xenophobia, etc. but I’m not aware of any campaigns against racism.  – surely we need these.

According to the Freedom Charter, South Africa belongs to all who live in it.  But this remains a wonderful ideal, and we remain far from achieving it. Yes, in some respects we have made progress. Certainly, we are a better society today, we must take solace from that, we’re not a society at war with each other, and there remains enough goodwill to build on the vision that Madiba has left us.

Read more on Nelson Mandela in the UNESCO Courier

Read also our interview with Desmond Tutu: No one will stop us