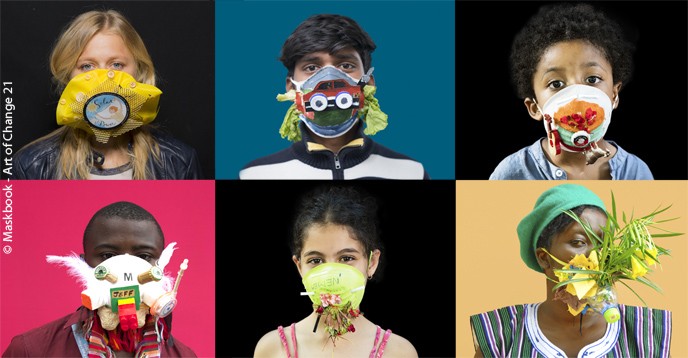 Maskbook, an international participatory and artistic project by Art of Change 21, an association which raises public awareness on the climate issue.

There is a tendency in the public debate on climate change to present the use and development of green technologies as a miracle solution or panacea. We often forget one aspect: it is crucial to ensure that their development goes hand in hand with social justice. “The realization that it is not just global warming that we are dealing with, but global warming in an unequal and unjust world, has yet to sink in,” according to Thiagarajan Jayaraman. Without equality and equity – in other words, without peace and security – we cannot effectively fight climate change, the Indian climate policy expert insists.

Does the current push towards green technologies overshadow the need to focus on equality and social justice in the fight against climate change?

This is definitely an issue that needs to be explored. I think there is a general recognition that you could hardly fight what is the most prominent environmental threat to humanity while you ignore issues of equality and social justice. The natural tendency is to argue that fighting climate change must go hand in hand with social justice. Unfortunately, the term social justice gets diluted in the usual international agency-speak in which this subject is sometimes being dealt with, and then you lose a specific understanding of what social justice means – it means very different things to  different people.

For me, at least one reading of social justice is having a regime or social economic order that leads to the enhancement, the extension and the development of human capabilities.

Obviously, one cannot speak of saving humanity while talking about tolerating injustices in the social and economic world. But in practice what happens is that there is a tendency in a section of the polity − especially among those who are environmentalists − to argue that the one is so important, that the other has to be put on the back burner. For instance, you shut down factories that are polluting before you worry about what is going to happen to those who are employed there. That kind of issue is where the question of equity and justice becomes really sharp.

So how do you avoid these pitfalls of social inequity while undertaking the development of green infrastructure?

This is not just an issue about the development of green infrastructure, but in all varieties of climate action, and there is no easy solution to it. To pretend otherwise is to fool ourselves. For instance, people talk of adaptation, of vulnerability or dealing with the needs of the vulnerable in a certain way as part of adaptation. This is the same jargon, slightly displaced, that comes from earlier talk about poverty eradication, like sustainable livelihoods. It’s not as if such talk does much to push poverty eradication along. There is no easy route to ensuring social equity as part of climate action.  Like all other developmental agendas, the fight for an equitable and just world is an ongoing fight, and it will continue. The important thing is to be very clear that climate is no exception.

There is a tendency, which has become prominent recently, since the publication of the Intergovernmental Panel on Climate Change (IPCC) Special Report on Global Warming of 1.5  ℃, wherein it is sought to be argued that a 1.5 ℃ world is naturally equitable. I think this is completely bogus − it’s not as if you can completely conflate social justice, equity and development with keeping the world average temperature increase at 1.5 ℃. This amounts to saying that all problems of injustice are environmental in origin, which is obviously an absurd statement.

Politicians who are aware of the threat of climate change and its scope have been trying to get businesses to back green industries, saying they will create millions of new jobs and fresh opportunities for growth. Is social justice a part of this equation?

So far, there has been a tendency to mollycoddle businesses and hope that they will do right by climate change and social justice. But this is a strategy doomed to failure.

Developed countries have reached a stalemate on this in climate talks. They go back and forth on carbon taxes, on carbon trading, but why can’t they mandate certain targets to be reached by certain industries? There have to be tighter regulations. Otherwise they should be made to pay the penalty, and that hardly seems to be on the agenda. To believe that somehow you can sweet-talk businesses into acting morally, or scare them into taking the right steps, seems to me a little absurd. I don’t think it’s a very useful point of view either – economics doesn’t work like that. Companies like Shell and ExxonMobil make polite noises about investing in green technologies, and then continue their business as usual.

I think that you need a two-pronged strategy on technology for the world: in developed countries, push very hard to convert rapidly to green technologies, which is not happening fast enough. For instance, many developed countries are still thinking of substituting gas for coal − both are fossil fuels − instead of going for renewables.

The other leg of the strategy is that developing countries must leapfrog in moderate amounts. This has to be done in a sensible way. They cannot be expected to leapfrog from centuries-old biomass burning to state-of-the-art solar power. To move an economy from one level of energy use and efficiency to a completely different level is not simply a matter of saying, ‘If you try hard enough, it can be done’. It’s more complicated than that.

Are the developed countries willing to help out to achieve this leapfrogging of developing countries to help fight climate change?

The effort is very patchy. Where developed countries sense opportunities, they are keen to bring their technologies to developing countries, as in electric vehicles. The other problem is that they want all-or-nothing solutions, which will not work. For instance, they want India not to invest in coal. My point is, when developed countries are unable to implement the coal-to-renewables transition, and in effect doing only coal-to-gas, why are they asking developing countries to do this?

In a wide variety of other sectors, the urgency which emerges in the talks of climate scientists is not reflected in policy and real climate action. Even in the official documents of the developed countries themselves, they are clear they will be hard-put to meet their Nationally Determined Contributions (NDC) targets at the rate at which they are moving today. There is hardly any real furore over this in climate policy circles.

There are two kinds of self-interest: one is the self-interest in a stable global order, and the other is self-interest in one’s own country. But when it comes to the US, unfortunately there is not even self-interest with regard to the conditions of life in the US itself. A recent study has suggested that the higher rate of warming in the higher latitudes will create a lot of extra storm activity and this especially refers to Canada, the US, the EU and Russia. These are the countries − except perhaps for the EU, which is not in the same league − that hardly discuss their own countries as the sites of the most demanding adaptation requirements, when in fact they should be doing so. Australia is now a huge burden of adaptation − all those forest fires contribute a lot to climate change.

This idea that adaptation is a problem of the third world – and not of their own (developed) countries – which has gained ground in some of the policy discourse, is, I think, unfortunate. In fact, if you compare sea-level rise at 1.5 ℃ to that at 2 ℃ – in terms of the number of people affected by it, North America has the highest absolute numbers of people who will be affected, even more than the island states. The idea that self-interest should make them worry about the environmental conditions of human life in the developed world itself, is not quite there. It has come home, to some extent I believe, in Europe, though it doesn’t seem to affect all their behaviour. But I think in many other places, this realization has not really sunk in.

There is this new wave of thinking which attributes all migration and conflicts to climate or environmental conditions. Some of it seems to be an effort to awaken the self-interest of developed countries, but from the global security perspective. But war or armed conflicts – which have a lot to do with migration – are very much problems of social and political conditions and are not simply climate-driven. For instance, the North African migration to Europe has a great deal to do with the huge destabilization and overthrow of regimes that provided some basic welfare, so obviously people are fleeing in the tens of thousands. The conflation of this with the impact of climate change is quite unwarranted.

A peaceful and secure world is a precondition for dealing effectively with climate change. But that does not mean peace and security will arise because you take effective climate action.

An Indian academic who has focused on climate action and climate justice for more than a decade, Thiagarajan Jayaraman is a professor at the School of Habitat Studies at the Tata Institute of Social Sciences, Mumbai, India. He is also a member of the Planning Board of the government of Kerala state and has worked with the Government of India on climate policy issues.