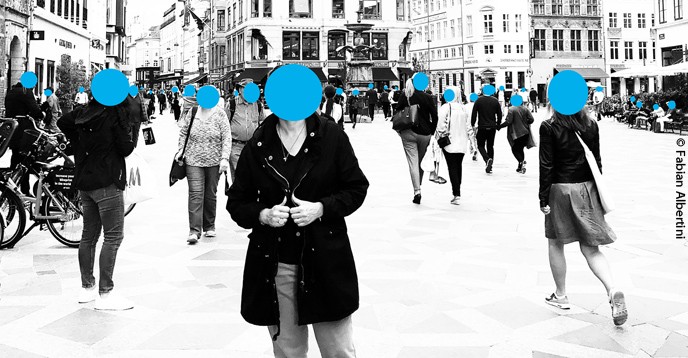 Artificial intelligence (AI) is being harnessed to tackle two of the most challenging problems today – the flagrant proliferation of fake news and the increasing invasion of individual privacy. Factmata, which uses AI to fight disinformation and D-ID, which protects identities from facial recognition systems using AI, were two of the ten winners of the 2019 Netexplo awards, presented at UNESCO Headquarters in April.

Dhruv Ghulati, CEO and co-founder of the London-based Factmata and Gil Perry, co-founder and CEO of D-ID, based in Tel Aviv (Israel) and Palo Alto (United States), spoke to the UNESCO Courier about their innovations.

What made you set up an AI startup to tackle fake news? Isn’t it a daunting task, like fighting corruption?

Yes, it is. If you want to change the world, rather than simply build a business, you need to think about building enabling technology, where, if it does work, the potential impact on everyone everywhere would be astronomical. By combining AI and the human community, Factmata develops explainable algorithms to solve the problem of online misinformation and build a better-quality media ecosystem.

Factmata’s scoring system has the ability to digest every piece of online content, read it intelligently and score it on nine signals − including hate speech, political bias and sexism − to give users a deep understanding of the quality, safety and credibility of any piece of content on the web. It builds these classifications in a fair and explainable manner, by deploying a proprietary network of experts who are most suited to assess any given content in question.

Our goal is to build a new universal ranking system for the quality of online content, to be deployed across ad exchanges [a digital marketplace that facilitates the buying and selling of media advertising inventory from multiple ad networks, often through real-time auctions], browsers, search engines, social networks, and more. This will ensure good quality journalism gets ranked higher and monetized more, and low-credibility, unsafe content gets demonetized.

What is the difference between Factmata and other software out there − the kind that Facebook uses, for instance?

Our technology has the potential to be more accurate because of the proprietary way in which we use expert communities to help build our software and give us unique training data – which is very difficult and time-consuming to maintain – rather than using existing open datasets out there that everyone else has access to. We've figured out a way we can get that data more cheaply and efficiently than others by making users feel they are part of the process.

Who are your primary users?

Our primary users are members of the public who like to challenge their critical thinking via our tools, and then brands and governments who are trying to ensure either they can monitor people spreading rumours that are really bad for societal health, or spread disinformation that can derail a product launch or campaign.

When it comes to weeding out fake news, would you say an AI is more effective than a human?

No. Humans are way better. But humans don't scale. Algorithms running on lots of hardware can scan millions of content items per second to flag them for fake news. But it would take huge numbers of humans to sift through such large volumes of content, who would need to be replaced before they got tired. Besides, only some humans are more effective than other humans. Hence the key is to combine the right humans with the right AI.

Can hackers and fake news-mongers cheat the AI?

Yes, they will try. But the good thing for us is that every time they cheat it, it becomes harder and harder. Soon, the number of cheaters good enough to beat the system is outweighed by the quality of the system. This is how we dealt with email spam, and in fact most spam/fraud/cybersecurity.

The key thing for us is being able to survive long enough with enough funding to build our core technology, whilst having customers that can sustain us, to be able to look to the future. I believe that with enough hard work and time, we will tackle fake news whilst most might give up.

You were a veteran of the Israel Defense Forces Intelligence Corps’ elite 8200 unit. What prompted you to create software that protects identities from facial recognition systems?

A group of us came up with the idea during our military service. At that time, we were very much aware of the risks that face recognition technologies can pose to privacy and identity protection. We were not permitted to post our own photos on social media for that reason. After leaving the army, I decided to dive deeper into the issue. I studied computer vision and image processing and worked in the field for several years. Then, about two and a half years ago, I partnered with Sella Blondheim and Eliran Kota, D-ID’s co-founders. Together we started writing one of the most complicated and ground-breaking algorithms to protect photos from face recognition technologies. This algorithm is now the foundation of D-ID.

Our faces are now our passwords, but unlike passwords, we cannot change them so they need to be protected. We have developed an AI technology that makes images unrecognizable to face recognition algorithms, while there are no differences perceptible to the human eye. This allows people to store, share and utilize images and videos without having to worry about their faces being picked up, identified and misused by automated face recognition tools.

How important is it to protect facial recognition, and what are the dangers associated with not using software to mask photos?

Firstly, face recognition is everywhere, and the market is booming. Second, we are surrounded by cameras. There are CCTVs everywhere – on the street, in shops, on the train. And then, we all have smartphones and we use them to take pictures and videos. Lastly, our photos are everywhere, on social media, on our company’s servers, in government databases, etc. This combination – surveillance cameras everywhere and face recognition that is becoming more accurate and easy to obtain – creates a situation where anyone can identify you, track you, and steal your identity.

Face recognition technology can be used to rank citizens’ behaviour or to tell you who around you has a debt with the bank. In some countries, you can take a picture of a random person on the street and use face recognition to find out every last detail about him. These apps have been known to be used to harass minorities and protesters. In the United States and other places, face recognition is used to learn about a customer’s age, gender, ethnicity, our satisfaction when we shop, and much more.

In short, I think we should all be concerned about our privacy. Luckily D-ID is here to help.

D-ID’s proprietary algorithm combines the most advanced image processing and deep learning techniques [which enable a machine to independently recognize complex concepts such as faces, bodies, etc.] to resynthesize any given photo to a protected version. This is extremely difficult to do, and we believe that we’re the only ones today who are capable of providing such a technology.

Do you envisage facing any problems with government agencies, who use a lot of facial recognition technology?

No, we don’t. In fact, governments and local legislators are pushing for more privacy regulation, which plays well with our vision.

Who are your main customers? Is it individuals who want to protect their identities?

We also target schools to help teachers and students to post and share images that are privacy-protected. As we advance with our technology, we are looking to be able to offer D-ID to everyone – with on-device solutions for smartphones and cameras, so that every picture we take would be de-identified on creation.