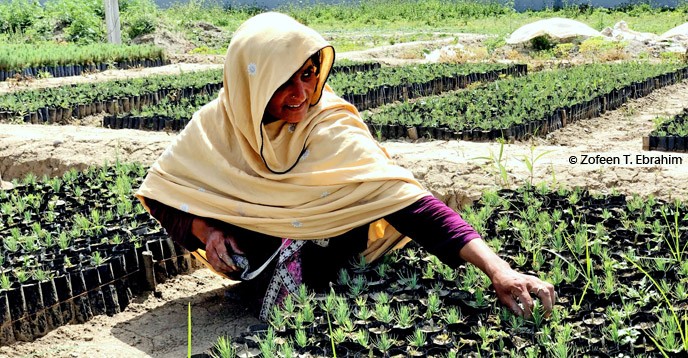 Work in the nursery helps the women of Khyber Pakhtunkhwa, Pakistan, fight against both global warming and poverty.

A billion trees have been planted in recent years in the Pakistani province of Khyber Pakhtunkhwa, about fifty kilometres from Islamabad, the country’s capital. The landscape has been transformed, and so has society. The fight against global warming and the fight against poverty are one and the same.

Sitting comfortably on a footstool in her backyard under a tree providing her ample shade, Farzana Bibi puts a fistful of earth from the mound next to her into a black elongated rubber pocket. The clucking of hens and the lone rooster prancing around her tiny green backyard make for a perfect pastoral backdrop. Once filled to the top, she deftly makes a dip in the middle of the tube, lodges a seed in it and covers it with soil.

Idyllic and surrounded by mountains, Bibi's village of Najafpur, in Khyber Pakhtunkhwa (KP) province, is some fifty kilometres from Islamabad, the capital of Pakistan.

She is among the 400 women who have been trained in modern ways to prepare and propagate plant nurseries in their backyards and sell the saplings to the provincial government's forest department. It is part of the government's Green Growth Initiative's (GGI) Billion Tree Tsunami Afforestation Project (BTTAP), to fight climate change and pollution by planting trees.

Pakistan’s total forest cover ranges between two per cent and five per cent of the land area – making it a country with one of the lowest forest cover in the region and well below the twelve per cent recommended by the United Nations.

In 2014, the Pakistan Tehreek-e-Insaf (the movement for the restoration of justice, PTI) the political party which governed KP between 2014-2018, jumped into the global fray and joined the Bonn Challenge – which aims to restore 150 million hectares of the world's degraded and deforested lands by 2020. Headed by former cricketer-turned-politician Imran Khan, the PTI ambitiously pledged to restore 350,000 hectares of forest and degraded land from 2014 to 2018.

More than a billion trees

In the short time it had, the forest department could not have completed or done what the political party had pledged, all on its own.

The model adopted for the BTTAP became a business involving local communities. "We were able to complete the project in August 2017, ahead of time!" said Malik Amin Aslam, who is currently federal minister and Climate Change Advisor to Imran Khan, who became the country’s prime  minister in 2018.

"The cost was estimated to be 22 billion Pakistani rupees ($155 million), and it was completed at Rs14 billion ($99 million), an anomaly for a government-funded project, which usually go over budget," pointed out Aslam, who was the force behind the initiative. In less than three years, 1.18 billion trees were grown.

The four-pronged strategy employed included planting new trees and regenerating existing forests; ensuring a high level of transparency; making this a people-centred programme; and taking on the powerful timber "mafia" or the illegal loggers.

According to Aslam, who also serves as Global Vice President of the International Union for Conservation of Nature (IUCN), sixty per cent of the billion-tree target was reached by "natural regeneration through community-managed protection of the forests". These forests were divided into about 4,000 enclosures, with the communities given the incentive of collecting dead wood. They also benefited from green jobs as forest nigehbans, or community-assigned guards, who protected the enclosures from grazing, fire and the illegal felling of trees.

The remaining forty per cent target was achieved by employing a public-private model of shared revenues and growth – like the nurseries being tended by Bibi and others. The government was also able to extricate nearly 3,000 hectares of its land from encroachers.

The project was lauded both nationally and internationally. The World Wildlife Fund for Nature- Pakistan (WWF-Pakistan) was tasked with carrying out an independent annual performance audit of the BTTAP.  Hammad Naqi Khan, Director General of WWF-Pakistan, said the project was "a good step in the right direction".

Meanwhile in Najafpur, Bibi's husband, Shaukat Zaman, joins in to fill the pockets. His poultry business folded two years ago, after a deadly virus annihilated the entire lot of chickens. He has been unable to recover the loss and start anew. Between them, they are able to fill a thousand  tubes with soil and seeds in a day. The completed tubes are stacked neatly at the back of the courtyard.

"We provide the seed and the pockets, they get the soil, mix it with organic fertilizer and put in the labour," explained Mohammad Tehmasip, BTTAP’s project director.

Over the next few weeks, Bibi and Zaman have to fill as many as 25,000 pockets. In about six to eight months, the saplings that survive will be bought by the government's forest department for Rs6 per sapling. "There's lots of unemployment in our village, so every little bit helps," Bibi says. Her three sons, all graduates, are out of work and help tend her nursery.

"In less than a year, they earn about Rs150,000 ($1,060) for running these one-unit (with 25,000 saplings) nurseries and we pay them in three installments," said Tehmasip. The first thing Bibi plans to do with the money she gets from selling the saplings is to make a proper grave with a tombstone for her 20-year-old daughter Anam, who died suddenly a few months ago.

"Last year, Anam had made her dowry from the money she earned from preparing a nursery," she says, her eyes welling up.

"I'd never seen so much money in my life; my life has changed completely, and all that without leaving home!" says 30-year-old Rubina Gul, bursting with enthusiasm. "My son goes to a private school now," she smiles. She and her husband, Sajjid Zaman, have been preparing and tending to nurseries since 2015. "The first year we used our front yard to grow the saplings," Gul recalls, adding that from the profits, they were able to set up a bigger nursery in an empty plot they owned, and also to convert part of it into a shop, which they rent for a monthly income. They were also able to buy a second-hand van. "We are now able to visit the adjoining valleys," Gul beamed.

...and now the 10 billion challenge

When the PTI formed the federal government in August 2018, the party decided to expand the project nationwide by planting 10 billion trees.

Terming it an "upscaled" version of the BTTAP, Aslam said it was, by nature, quite different, as it dealt with more diverse ecological zones, different terrains and different managerial models for tree plantations.

"The 10-billion-tree tsunami (BTT) is a much more complex endeavour, as it traverses diverse landscapes and forestry models across six regions – from mangroves to plantation blocks to natural reserves and urban forestation," he explained. Having battled and won against illegal loggers in KP, the authorities are ready to confront the land "mafia" in Punjab "to make space for forests to thrive," Aslam said.

And they are already walking the talk. An hour's drive from Lahore, at Balloki, in Punjab province, the government has succeeded in extricating state-owned land from those illegally occupying it. They have turned it into a nature reserve covering 1,011 hectares. Using legal channels, the government aims to recover twenty years of rent arrears for illegal use of the land from eighty politicians and landlords. It also plans to drive out encroachers from the riverine forests and wetlands along the River Indus, soon.

For those who got this once-in-a-lifetime chance to ride the BTTAP wave, it was a huge learning experience. "The forest department, once considered the most corrupt department, went through a thorough cleansing. The working improved manifold too. Earlier there was no monitoring, no accountability and the forest officers hardly ever even went into plantation sites. All that has changed. We may not have had the most trained team, but it became, by far, the most dedicated and motivated," KP's environment secretary, Nazar Shah, claimed.

Next, violators – often from the most influential segment of society, and who considered themselves invincible – were dealt with using an iron hand and penalized. All this was only possible because of political commitment at the top.

Many in the forest department said it brought about a change in the way people in KP started looking at trees. The traditional wisdom of conserving and preserving forests has been revived.  "Today we see a strong ownership in the communities," said Ubaidur Rehman, community development officer with the KP forest department. “Without the community on board, this project would not have succeeded.”

"What makes the BTT special is that it is not just about planting trees but about changing mindsets and making people think differently about the role of trees, nature and valuing their conservation. The billion trees project helped us change the behaviour of people, especially the children and youth of KP province, and made them value the trees as a natural asset. It did that not just within the province, but also catalyzed a green political movement across the country – which is now more sensitized to ecological conservation," Aslam added.

And though it looked like an “impossible" task, especially for a province where the timber "mafia" rule was so well-entrenched, today, in retrospect, the two most important lessons for Aslam were: "Firstly, that if you give nature some space and a chance to rebound, it does so beyond your expectations and calculations; and secondly, that nothing is impossible if you wholeheartedly commit to it and are willing to work hard.”

A Pakistani journalist who covers development issues for national and international media outlets, Zofeen T. Ebrahim is Pakistan editor for The Third Pole, a multilingual platform dedicated to promoting discussion about the Himalayan watershed and the rivers that originate there.