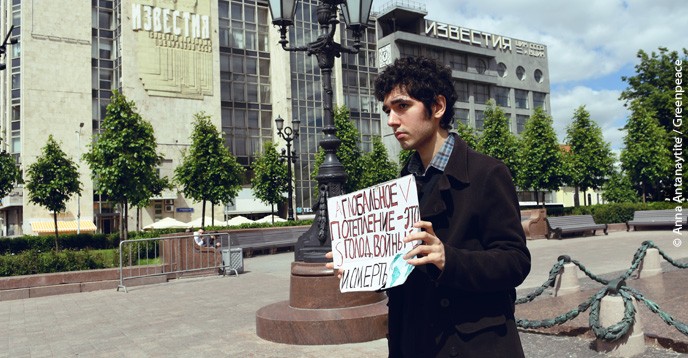 Every Friday since March 2019, Arshak Makichyan has been demonstrating alone in Moscow’s Pushkin Square. His placard displays slogans like “Global warming equals hunger, war and death”. This young violinist in Russia’s capital is leading a solitary and tenacious fight on behalf of the entire planet.

How did you end up demonstrating alone on the street?

I have been interested in environmental issues for a long time. But it was only towards the end of 2018 that I was really struck by the problem of global warming, when I discovered, through Greenpeace International, what Greta Thunberg is doing. At the time, the idea of demonstrating in the streets, like this young Swedish schoolgirl, had not yet crossed my mind, because we don't really have a culture of protest here.

Then, in February 2019, I participated in a demonstration for the first time  – the march in memory of Boris Nemtsov, the former Russian minister and deputy, who was murdered in 2015. This experience made me realize that I was an adult who was capable of doing something similar myself.

When I learned – quite by chance – that a demonstration was being organized in Moscow on 15 March as part of the Global Climate Strike, I went along. It was being held in "Hyde Park", a space in Sokolniki Park specially designated by the authorities as a zone for free speech and protests. There were about seventy participants, but as the site is surrounded by a fence and not many people go through there, no one really noticed us.

That's when I decided to take action. Since solitary pickets or single-person protests are permitted in Russia, I thought I would demonstrate alone every Friday, to show my support for the Fridays for Future movement launched by Greta. I chose Pushkin Square because it is always teeming with people.

According to some sources, the first Global Climate Strike on 15 March 2019 mobilized about 1.8 million people worldwide. Why did only seventy people turn up for the march in Moscow?

This was not at all surprising. A large part of the population in Russia does not understand what global warming is. Many people think that the weather will become milder, that the winters will be less severe. People have nowhere to go for information.

We do not have a single well-known political figure who talks about ecological catastrophes and global warming, and the media do not report on these issues. Some believe that the public is not interested in climate change; others avoid the subject in order not to offend the oil and gas companies that hold the reins of economic power in this country – which is one of the world’s largest producers of these commodities. As a result, we keep quiet about Russia's lack of action to implement the 2015 Paris Agreement (COP21), which it has signed but not yet ratified. In my opinion, the silence on climate is no different from the silence on the Chernobyl disaster.

Even on the internet, the March 15 strike went almost unnoticed, for example, because people are afraid to mention youth demonstrations. Here, people are not allowed to organize demonstrations or hold a solitary picket if they are under 18 – involving minors in such actions is a punishable offence.

Yet, across the world, it is mainly young people who are mobilizing against climate change.

Yes, and it is precisely for this reason that I organized a flash mob on the web last May – with the idea of obtaining the right for schoolchildren and youth under 18 to fight for their future. Photographs of young people holding placards saying: "Let Russia Strike for Climate" (my flash mob’s slogan) in different countries were sent to me. Like one of a 9-year-old girl demonstrating in New York. Greta is 16 and she can demonstrate on the streets without fear of any consequences. She also responded to my flash mob and follows me on Twitter, where I write in English. That made me so happy. It’s really rewarding when someone like Greta Thunberg, who has done so many positive things for the world, takes an interest in what you are doing.

And this is even more important because, to my knowledge, there were only three of us staging solitary pickets before the second World Climate Strike on 24 May 2019 – one girl in Yaroslavl, in the central region of Russia, and another in Saratov, about 850 kilometres from Moscow.

And what did you do for this second strike? It is reported to have mobilized more than a million people around the world and even influenced the European Parliament elections on 26 May,  putting green parties in the lead in several countries.

Along with the Uchenik student’s union, we applied for authorization to hold a gathering of 500 people in Museon Park, in the city centre. But we were refused permission on the grounds that the space was not large enough – even though, according to the union, the park could hold up to 850 people. After several unsuccessful negotiations, about ten one-person demonstrations took place in Moscow. During the day, I held a solitary picket in front of the Pushkin statue, and in the evening, the union members took over.

On that day, Greenpeace International let me use their Twitter account. For an hour, I reported on the various actions being staged in Russia. Then, for the rest of the day, I wrote the tweets for their Russian section. There were demonstrations in about ten cities in total, but they were always quite small.

Where do you get the inspiration for the slogans on your placards?

For the first one, I referred to the Paris Agreement, but I quickly realized that people did not know what that was. So I started writing about simpler things – about sorting waste [for recycling], for example, which is still not done in Moscow, and against the oligarchic system of waste management. We pay for waste collection, but there is no infrastructure in place. Of course there are a few sorting bins, but the rubbish gets mixed together as soon as it is loaded into the garbage truck and arrives jumbled up at the landfill site – under the pretext that so few people sort their rubbish that it is not worth the effort!

And how do passers-by react to your slogans?

I usually stand in front of the Pushkin statue and stay there for about two hours. In this time, I am usually photographed approvingly and supported by about ten people. Many others come up to me and ask strange questions, referring to lies invented by Russia’s enemies or international conspiracy theories. I don't argue with them. I have also been approached by police officers who photographed my passport and told me they would report me to their superiors. As for other passers-by who don’t show any particular interest, I have no idea what the effect is on them. They read what is written on my placard and it probably makes them think.

Have you thought about what to do next in your fight against climate change?

Before I started all these actions, I planned to continue my music studies in Germany. But last May, I decided to stay in Moscow. I realized that my solitary picket was more important than my violin bow. Because what’s the point of having an education and starting a career if you have no future?

As my actions seem to be finding some resonance in society, I have decided to continue going out on the street every Friday. I am in contact with people who share the same concerns as me and we plan to meet to discuss how we should develop our projects. I believe we will make a difference. If until 15 March 2019, the problem of global warming had been ignored, everything is beginning to change now.