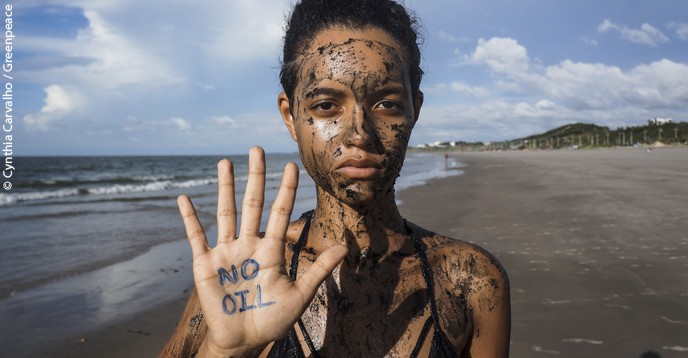 “Climate denial has benefited from the generosity of the fossil fuel industry.”

Climate denial has increased the risk of catastrophic global change. Should international criminal law be used against those who promote this dangerous trend? Economic and political leaders can no longer pretend it is business as usual. Whether they actively induce environmental harm or just ignore the existential threat against the survival of the human species, states and corporations must be held accountable for their actions or inaction regarding climate change.

A fire has started in the theatre, from which there are no exits. Unchecked, the fire will kill and injure many in the theatre, starting with those in the cheapest seats. Many people can smell the smoke, but some others have not noticed it yet. Some people are trying to warn everyone so that the fire can be contained before it spreads out of control. Another group – sitting mainly in the most expensive seats – is trying to shout loudly that there is no fire, or that it is not serious, or that there is plenty of time left to put it out. This group uses emotive language and insists that the other group is not to be trusted.

Many people in the theatre are confused by these conflicting messages or convinced by the fire-deniers. There are enough people in this combined set to significantly slow down the efforts of those listening to the accurate warnings, those who are trying to put out the fire. In this scenario, those shouting “No fire!” ought to be silenced, because there is a fire that requires urgent and immediate action to prevent it from spreading and becoming uncontrollable. But the fire is not being tackled properly because many of the people in the theatre do not know whom to believe.

Can we compare those who deny the reality of climate change to the group that occupies the best seats in the theatre? The answer seems obvious: yes.

Accelerating the extinction of humanity

Criminal sanctions are the most potent tools we have to mark out conduct that lies beyond all limits of toleration. Criminal conduct violates basic rights and destroys human security. We reserve the hard treatment of punishment for conduct that damages the things we hold most fundamentally valuable. Climate change is causing precisely such damage.

Over the last 250 years or so, we have burned fossil fuels for cheap energy, destroyed carbon sinks, grown the global population, and failed to halt the malign influence of corporate interests on political action that could have made mitigation manageable. Now, we have a window of just ten years or less to avoid using up the carbon budget for 1.5 ℃, according to the 2018 Special Report of the Intergovernmental Panel on Climate Change (IPCC). If we continue on our current trajectory of emissions without aggressive mitigation, we could see warming in the range of 4–6.1 ℃ above pre-industrial averages by 2100. Even if all countries meet their current mitigation targets under the Paris Agreement 2015 (COP21), we are likely to see warming of at least 2.6 ℃ by 2100.

A 4–6.1 ℃ rise in temperature by 2100 would be catastrophic. Large areas of the earth would become uninhabitable as sea levels rise and temperatures soar. Severe weather events, crop failure, and conflict in the face of mass migration never before seen in human history, would place intense pressure on remaining habitable places. In these fragile and febrile conditions, positive feedback from warming could put humanity at risk of extinction, according to the journal, Futures, September 2018. This feedback occurs when tipping points are passed in the climate system, causing processes to be unleashed that exacerbate warming. For example, the transformation of the Amazon forest from the world’s largest carbon sink to a carbon source; or, the massive retreat of polar ice, which reduces the planet’s reflectivity, leading it to warm at a greater speed. These tipping points are described in the IPCC’s Fifth Assessment Report (AR5) as a critical threshold at which global or regional climate changes from a stable state to another stable state.

Temperature rises of 4–6.1 ℃ are not likely, but they are not science fiction either. Each year that passes without aggressive mitigation to reach net zero emissions by 2050 makes this existential threat more real. Even if the Paris Agreement aggressively ratchets up mitigation ambition to close the emissions gap by 2030, it remains the case that we have already reached 1 ℃ of warming. Given the time lag between emissions and the warming they induce – due to the long lifetime of carbon molecules in the atmosphere – further increases are to be expected.

Should we use criminal law to tackle climate change? The current generation of people alive in the Anthropocene is capable of damaging and degrading the environment in ways that could make humanity go extinct. Postericide is a morally required response to humanity's changed circumstances in the Anthropocene. The scope of international criminal law makes it the right site to address the existential threats created by climate change. International criminal law aims to protect the entire human community irrespective of national borders, now and into the future. International criminal law expresses the values that bind the human community together across time. It asserts the condemnation of  “unimaginable atrocities that deeply shock the conscience of humanity” – as stipulated in the Rome Statute of the International Criminal Court (ICC) of 17 July 1998, which defines, inter alia, the international crimes over which the ICC has jurisdiction.

For there to be a crime, there must be a criminal. The death and suffering caused by climate impacts is deeply shocking, but this is not enough to prompt prosecution under international criminal law. Death and suffering are caused by volcanic eruptions, yet there are no culpable agents in these cases.

The current climate crisis has been caused by human activity over the last two and a half centuries or so, leading to the accumulation of greenhouse gases in the atmosphere. The crisis is in large part an unintended consequence of action across history that has led to the destruction of carbon sinks, increased carbon flows, and concentrated carbon stocks. Most of this conduct is beyond the legitimate reach of international criminal law, not least because the relevant people are dead. Most, but not all.

I have proposed that international criminal law should be expanded to include a new criminal offence that I call postericide. It is committed by intentional or reckless conduct fit to bring about the extinction of humanity. Postericide is committed when humanity is put at risk of extinction by conduct performed either with the intention of making humanity go extinct, or with the knowledge that the conduct is fit to have this effect. When a person knows that their conduct will impose an impermissible risk on another and acts anyway, they are reckless. It is in the domain of reckless conduct, making climate change worse, that we should look for postericidal conduct.

No one person’s emissions are fit to bring about human extinction as a result of climate impacts – the many private jets and oil wells they own can do so, however. But individual people in their roles as political and corporate leaders can exert extensive control over how much worse climate change becomes as a result of their executive action. A country’s president can withdraw an entire state from a global agreement on mitigation; a Chief Executive Officer can authorize the withholding of information about the progress and impacts of climate change because it threatens the corporation’s bottom line.

Individuals often have control over conduct they do not perform themselves – for example, by giving direct orders to subordinates, or by virtue of the special relationship in which they stand to others whose conduct causes harm. This means that we can assign vicarious liability to individuals of power, authority and influence within groups that, as collectives, worsen climate change in ways fit to make humanity go extinct. Just as international criminal law holds military leaders to account for genocide committed by their troops, it should hold political and economic leaders to account for postericide committed under their authority. These leaders should go to trial at the ICC and be held to account at the bar of the human community’s fundamental shared values.

Who should be prosecuted for postericide? We could start by examining the established international network of well-funded organizations devoted to organized climate denial (For more on this subject, read "Text-mining the signals of climate change doubt", in the journal Global Environmental Change, Volume 36, January 2016).  The epicentre of this activity is in the United States. A set of Conservative think-tanks has deliberately deceived the public and policymakers about the realities of climate change. Their ideologically-driven climate denial has been heavily funded by the fossil fuel industry; which include, for example, Koch Industries and ExxonMobil. This climate denial has had a significant impact on public opinion and has impeded legislation to tackle climate change.

Should Rex Tillerson [the former CEO of ExxonMobil, who also served as US Secretary of State from February 2017 to March 2018] Charles Koch and David Koch [the owners of Koch Industries] be tried for the crime of postericide at the ICC? Their vicarious criminal liability would be generated by their authorization of multiple acts of climate denial by others, without which early aggressive political action on climate change would have been more likely.

Climate denial has seriously impeded aggressive mitigation efforts that could have averted our present climate emergency. It has magnified the risk that humanity locks in to catastrophic global climate change. The people in positions of authority in states, or industrial groups whose lies have put us and our descendants in peril, should be held accountable. The damage that climate deniers do is heinous, and they have no excuses. The time has come to prosecute them for postericide.

Professor of Political Theory at the University of Exeter, United Kingdom, Catriona McKinnon has published numerous articles and books on climate justice, and on toleration and liberal political ideals. She is currently completing a monograph defending postericide (Endangering Humanity: An International Crime), writing an introductory book on climate justice, and researching the ethical questions raised by geoengineering.