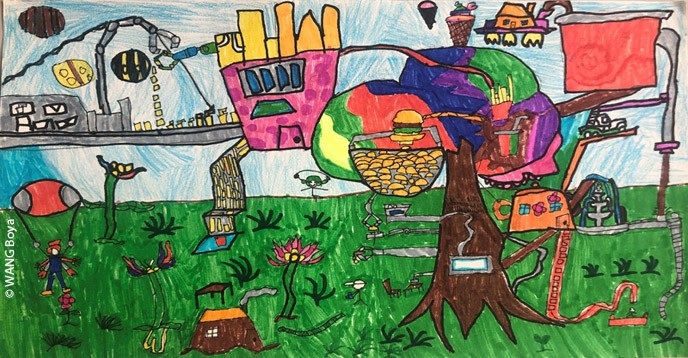 Future city, a drawing by Wang Boya, 7, for The Future World in My Eyes, an art activity launched by the UNESCO Courier on its WeChat platform, in 2019.

Non-state actors, with cities at the forefront, must be the first to sow the seeds of a carbon-free society. To avoid the nightmare of climate change, we must reduce our carbon emissions further than called for by the Paris Agreement of 2015. This requires coordinated actions at the international level and concrete initiatives such as electric transport, the decarbonization of housing and a large-scale transition of energy.

Before the publication of the Intergovernmental Panel on Climate Change (IPCC) Special Report in October 2018, the tipping point (the critical threshold at which the climate changes from one stable state to another) of the increase in the earth's average temperature was thought to be 2 ºC. As we have learnt since, it is now at 1.5 ºC. If this threshold is crossed, IPCC scientists note, society will face devastating consequences. These include the loss of entire ecosystems and species, melting polar ice caps and rising sea levels, intense heat waves and droughts, and an increased intensity and frequency of extreme weather events.

The Paris Agreement of 2015 (COP21) is not enough to stop this catastrophe. Scientists have explained that in order to limit global warming to 1.5 °C instead of 2 °C, as set out in this Agreement, it would be necessary to reduce net global carbon dioxide (CO2) emissions by about forty-five per cent of 2010 levels by 2030, and to achieve net-zero carbon emissions by 2050. The emission reduction targets set by COP21 average around twenty-five per cent.

What is to be done? The IPCC has called for “rapid, far-reaching and unprecedented changes in all aspects of society”, which essentially involves reducing our carbon emissions. Accumulated CO2 emissions and the average increase in the earth's temperature are directly related to the production and consumption of fossil fuels. The consequence is unprecedented global warming – the last three years have been the hottest in history.

So what explains the certainty of scientists who say that it is possible to lay the foundations of a carbon-free society by 2030? According to them, a net-zero emissions society is entirely possible. And it is not an “alternative” society or an experimental social model: decarbonization is the new condition for the viability of life on the planet.

Among the most authoritative sources on the subject is the International Energy Agency (IEA), which has published its flagship publication, World Energy Outlook (WEO), every year since 1977. From its analysis, it can be concluded that the new actors in the fight against climate change – non-state groups made up of citizens, entrepreneurs, city governments and universities – have taken the lead in decarbonization efforts. Multiple platforms demonstrate the climate actions undertaken by these new actors. They are a daily illustration of a transition that is making advances, which are sometimes faster than the fulfillment of the goals set by their own countries. Here are some examples of these new certainties that encourage hope.

First, in 2016, the growth rate of installed capacity of solar photovoltaic systems exceeded that of all other energy sources. Since 2010, the cost of new installations has fallen by seventy per cent for solar photovoltaic and twenty-five per cent for wind energy. The cost of photovoltaic batteries has fallen by forty per cent, in addition. Between 2020 and 2050, wind and solar energy will together account for forty-eight per cent of total electricity. And the European Council has set new targets to be achieved by 2030, which include a forty per cent reduction in carbon emissions, twenty-seven per cent renewable energy in the energy mix,  and a twenty-seven per cent improvement in energy efficiency.

The climate action of cities

I start from the premise that a decarbonized society is possible on the condition that we concentrate transitional climate actions in the management of cities, and if we undertake these actions in an articulated and collaborative manner on an international scale between 2020 and 2030.

Why start with cities? Because they account for three-quarters of greenhouse gas (GHG) emissions and two-thirds of the world's energy consumption. About seventy per cent of the world’s cities already face the consequences of climate change, and almost all are at risk. By 2060, more than a billion people  – projected at ten per cent of the world's population at that time – will live in low-lying urban coastal areas, with the majority of them in developing countries.

These figures – taken from Bahareh Seyedi, climate and energy advisor at the United Nations Development Programme (UNDP) – provide an overview of the vulnerability of cities to climate change, and stimulate reflection.

It is clear that cities will have to develop climate action plans by the end of 2020 – that is, tomorrow! – to limit global warming to 1.5 °C and to adapt to the repercussions of climate change. These action plans can be structured around three pillars: reducing CO2 emissions, increasing  resilience, and education.

Reducing CO2 emissions includes the transition of transport systems; energy efficiency; integrated waste management and the promotion of recycling; and the renewal of urban infrastructure to achieve sustainable patterns. Increasing resilience must start from the recognition that cities are complex systems and must therefore respond in complex ways to the effects of climate change. This approach includes the adaptation of territories to climate change; risk management and prevention; the strengthening of circular and local economy systems, and the implementation of decentralized energy systems (for the production, distribution and marketing of renewable energy surpluses). The education of citizens, especially the youngest, is essential, because it will enable them to implement transitions in an orderly and accelerated manner.

The cities that follow the net-zero carbon route will need to combine the best of urban design and cutting-edge digital technologies to meet these challenges.

They will have to get rid of fossil fuels in their streets by purchasing only zero emission buses starting in 2025, to ensure that large parts of their cities have no more carbon emissions by 2030.

It will also be important to decarbonize buildings, by adopting regulations or designing policies to ensure that new buildings reduce their carbon emissions to net-zero by 2030 – with the measure applying to all buildings by 2050.

Another key measure would be to reduce the amount of waste generated by at least fifteen per cent per capita by 2030, and to reduce the volume of municipal solid waste sent to landfills or incinerators by at least half.

Founder of the Klimaforum Latinoamérica Network (KLN), Manuel Guzmán Hennessey (Colombia) is a professor at the Universidad del Rosario in Bogota, Colombia. KLN is an independent organization dedicated to promoting climate actions that contribute to the decarbonization of society. It works in partnership with universities, companies and civic groups, and consists of an advisory board and a team of recognized environmental advocates.