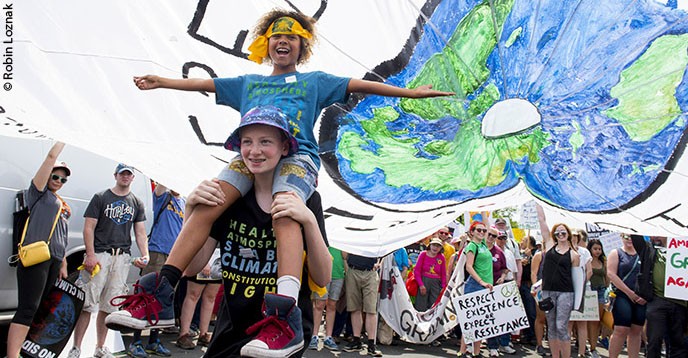 More and more citizens and non-governmental organizations around the world are going to court to seek climate change justice. The unprecedented extent of these disputes deserves to be highlighted. This relatively recent type of litigation is forging public opinion, and constitutes a form of pressure on states and industries that is forcing them out of their inertia.

The years go by and new records are set for rising temperatures. Greenhouse gases (GHG) continue to increase, and populations the world over are more and more concerned and discontented about the lack of responsiveness of states to the climate change crisis. As a result, the number of lawsuits against climate change inaction is rising sharply.

The first case of this kind in the world was filed in 2013, in the Netherlands. The Urgenda Foundation, a Dutch environmental group, sued the government  for “the failure of the Dutch state to take sufficient actions to prevent dangerous climate change”. At the time, the Netherlands was one of the most polluting countries in the European Union, and the Foundation demanded it take action to reduce the country's emissions by twenty-five per cent to forty per cent by 2020 (compared to 1990 levels).

On 24 June 2015, the District Court of The Hague ruled in favour of Urgenda – a judgement confirmed on 9 October 2018 by the Hague Court of Appeal, based on scientifically established facts and in line with the traditional principle of a government's duty of care. The court ruled that Dutch GHG emissions must be reduced by at least twenty-five per cent. Recognized as the world's first climate liability lawsuit, this ruling sets a precedent that has since inspired other legal actions around the world.

On 5 April 2018, the Supreme Court in Colombia ruled in favour of twenty-five young people who had sued the government for failing to guarantee their fundamental rights to life and the environment. With the support of Dejusticia, a Bogota-based human rights non-governmental organization (NGO), they obtained a court ruling ordering the government, provincial governors and municipalities to draw up an action plan to preserve the forest – recalling their duty to protect nature and the climate on behalf of present and future generations.

Earlier in the same year in Norway, a verdict that was less favourable for the plaintiffs was delivered. In 2015, two NGOs, Greenpeace Nordic and Nature and Youth, had opposed the opening of new oil and gas drilling areas in the Barents Sea in the Arctic Ocean, one of the most fragile ecosystems in the world. But the Oslo Court ruled that these new drilling efforts were not in violation of the Norwegian Constitution. The NGOs were required to reimburse 580,000 Norwegian kroner ($66,100) in legal costs to the government.

Also in 2015, in the United States, twenty-one youth represented by the non-profit Our Children's Trust, filed an appeal in an Oregon court, demanding that the US federal government reduce CO2 emissions significantly. Their plaint asserted that the government, through affirmative actions that cause climate change, has violated the youngest generation’s constitutional rights to life, liberty and property and failed to protect essential public trust resources.

Known as the Juliana v. United States Youth Climate Lawsuit, this trial has yet to be admitted to the US Supreme Court, in spite of the support of thousands of people – including members of the US Congress, legal scholars, businessmen, historians, medical doctors, international lawyers, environmentalists – and more than 32,000 youth under the age of 25.

At a hearing in the case held by the Ninth Circuit Court of Appeals [a US federal court preceding the Supreme Court] on 4 June 2019, a three-judge panel remained sceptical of whether the court had any role to play in dealing with the landmark case. Their decision could have important implications on whether or not the courts can be used to pursue climate action in the US.

By contrast, in Pakistan in 2015, a farmer successfully petitioned judges to force the government of this country – which is particularly affected by global warming – to adopt climate legislation to protect his farm and guarantee his right to food and access to water.

In France, the first lawsuit related to climate change was initiated in December 2018 by Notre Affaire à Tous, a climate justice association, with three other NGOs (Oxfam France, Greenpeace France and the Fondation Nicolas Hulot pour la nature et l’homme). Dubbed the “case of the century”, it presented six demands to the government: the inclusion of climate in the constitution; the recognition of climate change as a crime of ecocide; the possibility for citizens to defend climate well-being in court; the reduction of GHG emissions; the regulation of multinational companies' activities, and an end to subsidies for fossil fuels.

Aided by numerous influencers, the petition was an unprecedented success, with more than two million signatures obtained in a few weeks. In March 2019, when there was still no response from the government, the NGOs filed an appeal. They are aware that the procedure will drag on, but hope to raise public awareness and promote the idea that going to court is an effective means to compel action.

At the European level, the first litigation was initiated by a group of ten families from eight countries – France, Portugal, Romania, Italy, Germany, Sweden, and also Kenya and Fiji – in May 2018. The plaintiffs of the People's Climate Case took the European Parliament and the Council of the European Union to the European General Court (EGC) for having allowed too high a level of GHG emissions. According to a press release from the People's Climate Case in April 2019, the plaintiffs called on EU leaders to reduce GHG emissions by fifty-five per cent by 2030 (compared to 1990), instead of the target of forty per cent. According to them, the currently set target is “inadequate with respect to the real need to prevent dangerous climate change and far from what is needed to protect our fundamental rights of life, health, occupation and property.”

While recognizing that climate change affects all Europeans in different ways, the EGC dismissed the case on procedural grounds in May 2019, saying the plaintiffs did not have a right to go to court to challenge the EU’s 2030 climate target. The families who initiated the lawsuit  plan to appeal to the European Court of Justice – it is a case to be followed.

Legal action for climate crime is also being taken against the private sector. The nature of the claims differs according to the target. From states, plaintiffs demand more urgent, proactive and binding mobilization and action. From the private sector, they increasingly litigate for compensation for losses (crops, infrastructure) in the event of climate change hazards (heat waves, droughts, floods, etc.) or the management of upstream developments, in coastal areas in particular.

One of the most significant lawsuits in the private sector was filed in Germany in November 2017. After two years of proceedings, the court agreed to hear the case of Saúl Luciano Lliuya, a Peruvian peasant and mountain guide from the city of Huaraz (100,000 inhabitants). Lliuya is suing German energy giant RWE, Europe’s largest carbon emitter, to force it to pay for the damages caused by climate change in the Andes. Once his lawsuit was deemed admissible, the case entered the expert appraisal phase. It was a symbolic step forward to commit states and corporations to global climate justice.

In the Philippines, in 2015, survivors of the Haiyan super-typhoon and a coalition of NGOs filed a petition with the country's Human Rights Commission for action against forty-seven  multinationals, including Shell, ExxonMobil and Chevron. They demanded an investigation into human rights violations related to the effects of climate change and ocean acidification, and the possible failure of the most polluting companies to meet their responsibilities to the Filipino people. Another legal case to be followed.

In the US, lawsuits against the oil industry are multiplying. Big Oil [as the clutch of the world’s largest publicly-traded oil and gas companies are known] has been accused of being responsible for climate change and its effects (rising water levels and coastal erosion) and of deliberately “discrediting” climate science.

The United Nations Environment Programme (UNEP) recorded nearly 900 climate cases worldwide, as of May 2017. The figure is increasing daily: in May 2018, the database of the Sabin Center for Climate Change Law at Columbia University in New York counted 1,440 court cases related to climate worldwide, including 1,151 in the US.

“Sometimes plaintiffs know very well that the trial has no chance of success, but it’s the media coverage that counts, and the way the lawsuit is orchestrated,” explains Sandrine Maljean-Dubois, CNRS (National Centre for Scientific Research) Research Director at the University of Aix-Marseille, France. According to her, “the main issue is to establish that the state has failed, that it is responsible for this deficiency and that it must remedy this and choose the means to comply with its obligations.” It is therefore a question of obtaining action rather than compensation and of exerting political pressure through lawsuits, but also through marches or strikes for the climate, and ultimately of seeing civil society adopting this type of approach to other subjects – air pollution, biodiversity, the environment, etc. “Even losing a lawsuit can be positive, to show the inadequacy of the law,” concludes Maljean-Dubois.

A French journalist, author and film director who focuses on environmental, economic and social issues, Anne-Sophie Novel works for Le Monde, Le 1, Public Sénat and specialized French publications. She directed the documentary Les médias, le monde et moi (The Media, the World and Me), a preview of which was held at UNESCO on 28 March 2019.