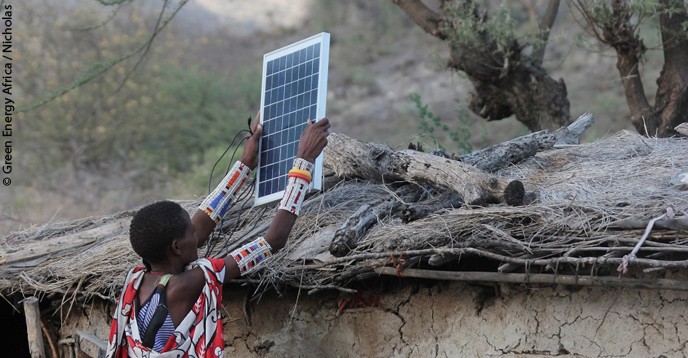 Installing a solar battery on a rooftop of a hut in Magadi, Kajiado county, in Kenya.

The availability of solar-powered water pumps and solar lamps have had a life-changing effect on rural communities in Kenya, providing clean drinking water and lighting while eliminating hardships, health hazards and habits that contribute to climate change. The government’s commitment to invest in clean energy has been bolstered by private companies to bring about real change, especially for those who need it most.

“I have nothing more to say than thank God for remembering us, and the people who have made the completion of this water project here possible” Jane Akinyi, a resident of Nyandiwa in Homa Bay county says. Even though the area is not far from Lake Victoria, one of the largest fresh-water lakes in the world, access to clean drinking water has remained unattainable here for decades.

“Women used to walk several kilometres to the rivers to seek water, and often, the long queues at the only water points in the region would mean you could waste the whole day waiting. This meant chores at home would remain undone, resulting in other challenges,” Akinyi explains.

The recent commissioning of five solar-powered water pumps in the region has made these hardships a thing of the past. Currently serving 700 households in seven villages, the new water project, launched on 11 February 2019, gives residents access to clean water for drinking and cooking, while protecting the water catchment areas around the Rangwe and Riana rivers. Its water pump at Nyandiwa produces 3,000 litres of water per hour – the 2.2 kilowatt pump has been reinforced by a five kilowatt solar structure, to ensure that it works even when sunshine levels are low.

Previously, the people of Rangwe constituency were forced to boil their water to avoid contracting waterborne diseases such as cholera. This was especially important after water pipes burst and clean water was contaminated by raw water. Boiling water requires firewood and the burst pipes meant that people had to fetch water from the catchment areas – both these actions  contribute to climate change.  It took the intervention of the Kenya Red Cross Society (KRCS) and the area’s Member of Parliament to rehabilitate an old water supply project that was conceptualized in 1979 to run using diesel power, but was never completed.

The work involved the KRCS – which manages the new project – undertaking the fresh protection of the old water spring and fencing it, designing and constructing a new sump tank, and installing solar energy-based pumps.  The use of solar energy, instead of diesel, to pump the water has not only saved the community from the high costs associated with using petroleum products, but has also ensured a steady supply of clean power – all without adding any air pollution.

The private sector has viewed solar energy as a business opportunity, while providing climate- friendly energy to poor communities. In addition to government investment in the development of solar energy in the country, the private sector – both businesses and non-profits – have been instrumental in the growth of the sector.  Through such initiatives as highly subsidized prices, social marketing and loan schemes, a number of entities have aggressively expanded the use of solar systems across the country.

Solibrium, a local company, provides solar power at affordable prices. It sells solar panels, solar systems and solar lamps to communities through women’s groups, offering loans or a subsidized price system. Residents have access to the solar systems and can pay in installments. Incentives are extended to those who pay promptly and some existing users are made sales representatives to recruit more users.

Solibrium has recruited nearly 200 members through women's communities, who actively promote the sales of solar products in six counties in Kenya. More than 50,000 households have been equipped by the company so far.

The solar lamps have been life-changing for the communities. “The solar systems have reduced the health burden and air pollution related to using diesel engines within the communities. For example, for generators at water pumps and hospitals, the solar lanterns have eliminated the use of kerosene, which was not only expensive, but caused eyesight problems for users. It has  reduced the destruction of forests by eliminating the need for charcoal, and the availability of power also enables children to do their homework after nightfall, without hurdles,” Anton Espira, the company’s founder and chief of operations explains.

The solar systems, which include lamps and chargers, play a significant role in the economic empowerment of the farmer communities they are working in, affirms John Ohaga of One Acre Fund, an international non-profit working in East Africa. “These lanterns have helped some of the farmers do business late into the night, thus growing their businesses. They are able to charge their phones, thus fully utilizing the online payment platforms, and use the torches to continue some work on the farms after dark,” he says.

Farmers are also increasingly using solar irrigation systems to deal with the unpredictable seasons brought about by Kenya’s climate. Unlike before, when irrigation farming and predictable farm produce was mainly associated with the rich who could afford them, things have changed for the better for these formerly poor farmers, who were unable to invest in their crops and land. A better harvest also means food security for these farmers.

According to estimates by the International Energy Agency (IEA), solar photovoltaic energy will contribute the largest share (forty-seven per cent) of the technology mix for mini-grids and off-the-grid systems power generation in Sub-Saharan Africa by 2040. M-KOPA Solar, a privately-held Kenyan solar energy company has installed 225,000 solar energy products in the country so far, a 2016 study by the World Resources Institute indicated.

Kenya has committed to reducing its carbon dioxide emissions by 30 per cent by 2030.   Decreasing the use of diesel and petrol machines and easing pressure on forests by using less charcoal, the solar power systems are a major intervention that not only alleviate the problems faced by women and children in communities, but also play a big role in mitigating the adverse effects of climate change in Kenya.

The Government Master Plan for the energy sector notes that due to its position on the equator, Kenya is endowed with very high solar resources, among the highest ten of Sub-Saharan African countries. Given the challenges posed by conventional energy sources and poverty levels in Kenya, solar energy has high potential – the government, through its energy regulatory framework, is working to ensure the maximizing of this resource.  Electricity consumption is forecast to grow in the medium term by an annual average of 7.2 per cent per year, a 140 per cent increase over the 2015 level, by 2020. This makes it imperative to find renewable energy solutions to benefit marginalized groups and small-scale users.

Lighting up the world! in the UNESCO Courier, April-June 2019.

Head of Media Development and Strategy at the Media Council of Kenya, Victor Bwire is an environmental journalist. He also trains journalists on environment, health and related issues.