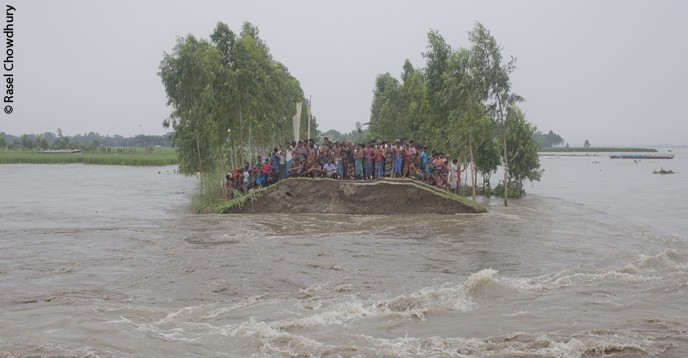 Cut off from the world, these villagers watch helplessly as the dam breaks and waters rise in the upazila (sub-district) of Raomari, in Bangladesh. "It all happened in half an hour," recalls Bangladeshi photographer Rasel Chowdhury.

If rich countries can adapt to rising temperatures "with the flick of a thermostat"– to use the metaphor of the South African Nobel Peace Prize winner Desmond Tutu – developing countries face far more dramatic challenges. A reflection on a shared solidarity informed by an ethical consciousness.

Facing the challenges of climate change, the world today is more in need of a framework of  ethics and an ethically informed practice of international solidarity than ever before.

This need arises, in the first place, from the stark reality that the global challenges and mega-trends of our time – climate change, the movement of people, geopolitical tensions, security, and international terrorism – become more and more integrated, but our responses to them are more and more fragmented. This was the core message of António Guterres, United Nations Secretary-General, in his speech to the World Economic Forum at Davos, Switzerland, in January 2019.

In the second place, and perhaps more importantly, the need for international solidarity also springs from the causes and effects of climate change itself. Climate change is the product of a world that is already deeply divided, and in its effects and impacts, intensifies and multiplies divisions and vulnerabilities that already exist.

This also applies on a subnational level to marginalized social groups and communities. These are undeniable political and social facts, experienced by many as injustices. Poorer nations and groups, for example, are much more vulnerable to the risks and burdens of climate change, while they have contributed much less, if anything at all, to its causes.

Similarly, poorer nations and groups already need to adapt to climate change, while they have the least resources to do so. Developing nations and groups are thus dependent on assistance for adaptation, while the urgency for such assistance is not very high in more affluent parts of the world. The rich are not directly affected by climate change for now, or if they are, they can adapt to it fairly easily.

This asymmetry has been captured neatly by Desmond Tutu, former Archbishop of Cape Town, South Africa, when he pointed out in the United Nations Development Programme (UNDP) Human Development Report 2007/2008 (p. 166) that those in more affluent parts of the world can – at least for now – adapt to rising temperatures by merely adjusting their air conditioning “with the flick of a thermostat”. But for countless women in developing nations, adaptation would entail walking ever-longer distances to fetch clean drinking water for their households.

The range of possibilities

The need for standing together and cooperating with one another in response to climate change is clearly there, but the world is divided, and the prospects for overcoming these divisions are very dim.

So, what, if anything, can we do about this? There are three obvious things we could do for a start: expand our conceptual understanding of the notion of solidarity; remove two of the stumbling blocks – human development and jobs – that are often used as excuses for not addressing climate change; move the conversation about solidarity from political and social facts to that of ethical principles.

Let us tackle the major themes in broad outline, noting how ethical considerations already start to emerge in the conversation about the concept of solidarity.

Expanding and deepening the notion of solidarity

Popularly, solidarity has been understood in recent times as a call for unity in trade union or political circles in the fight against labour exploitation or oppression. In both contexts, solidarity as a concept is linked to compassion with, and lending support – materially or otherwise – to victims of unfair labour practices or political injustice.

All these connotations are also present when solidarity is evoked as a basis for the fight against climate change: unity, identification, compassion, support and assistance.  But in this context, its  meaning is shifted to wider target audiences and contexts than that of labour movements or liberation struggles.

In the fight against climate change, victims are usually associated with those suffering directly – and often very dramatically and visibly – from extreme weather events (for example, floods, hurricanes, droughts, fires). In such cases, humanitarian aid is usually mobilized fairly quickly, within states or internationally, to provide for the immediate needs of victims.

Our motivation for such acts of solidarity is usually referred to as human solidarity, based on a recognition of those that suffer as fellow human beings, sharing the same fate as we do – their fate is our fate, and we cannot ignore it. This is often captured by metaphors of society as an organism, or the whole of humanity as one family.

Climate change, however, confronts us with the interdependence of us humans on one another and on ecosystems for our survival and flourishing, embedded as these ecosystems are in the biosphere, earth and planetary systems – all unfolding in processes of natural evolution over time. Accordingly, notions of earth solidarity, planetary solidarity, and intergenerational solidarity can be envisaged to elaborate on the reality that all life on earth is part, as it were, of the same community – the community of life sharing the same fate together.

In the international community, the fight against climate change is often framed as a dilemma. States often say they cannot engage in this fight because they first have to make sure that their citizens have development opportunities to move out of poverty. The same excuse is often made about jobs: if the fight against climate change puts workers at a disadvantage, then they cannot join in.

The argument about jobs was precisely the excuse used by the United States to justify its withdrawal from the Paris Agreement (COP21). But are poverty alleviation and job retention really so diametrically opposed to taking action on climate change? This was exactly the conundrum addressed in the 2007/2008 Human Development Report, with the telling title: Fighting climate change: Human solidarity in a divided world.

In this comprehensive report, two core messages are communicated. First, that climate change will definitely have a negative effect on human development in the long run, making it more difficult to achieve the Sustainable Development Goals (called the Millennium Development Goals when the report was written), and eventually, even reversing many of the gains that have been made in human development thus far in history. This is an alarming message, putting a big question mark on the argument that responses to climate change can be put on the back burner while we first eradicate poverty in the world.

In response to the serious and highly urgent need for human development and poverty alleviation, the second core message of the 2007/2008 report is that human development and the fight against climate change are not two separate agendas. They are two dimensions of the same agenda that are inseparably linked and need to be pursued together.

In policy and project terms, this means that measures adopted to respond to climate change should at the same time also contribute to human development, and have a beneficial impact in both areas. In ethical terms, solidarity in the fight against climate change conversely means that the poor and the vulnerable cannot be left behind. Their interests need to be addressed as well, and indeed as a matter of priority, in ways so smart and intelligent that the human development agenda and the climate change agenda fully merge.

This is why we need to shift the debate on solidarity from the field of socio-political facts to that of ethical principles. In this regard, UNESCO’s Declaration of Ethical Principles in Relation to Climate Change (2017) is a good place to start. Solidarity features there as one of six ethical principles that should guide all decision-makers in their responses to climate change.

In the context of social and political facts, the conversation is usually about a lack of solidarity, or the impossibility of achieving it – turning this into a convenient excuse to do nothing, rather than something, about climate change. In the ethical sphere, the conversation shifts to solidarity as a form of conscience and a source of inspiration for action – that is, as a commitment and point of departure, rather than a technical prerequisite for action.

Given the ethical demands of solidarity in the fight against climate change, huge uncertainties remain in an increasingly divided world. A radically expanded notion of solidarity may not facilitate international cooperation. But it could be an invaluable source of inspiration and motivation to undertake the mammoth task of tackling climate change together.

A professor of philosophy at South Africa’s Stellenbosch University, Johan Hattingh (South Africa) specializes in the areas of applied ethics, environmental ethics and climate change ethics. He served two terms as a member of UNESCO’s World Commission on the Ethics of Scientific Knowledge and Technology (COMEST). He was also President of the Ad Hoc Expert Group convened by UNESCO in 2016 to prepare the first draft of the Declaration of Ethical Principles in Relation to Climate Change.