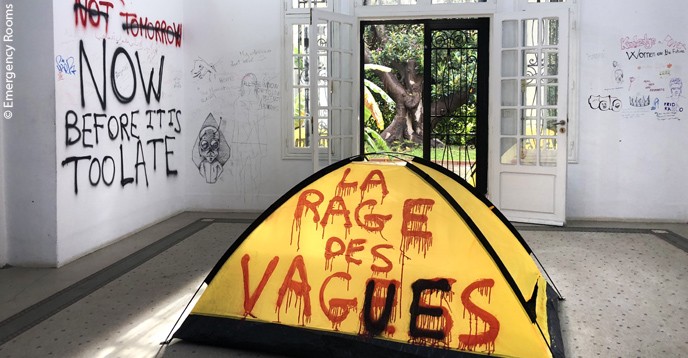 Now before it is too late, an Emergency Rooms installation by Thierry Joffroy/Colonel in Morocco, during the Casablanca Biennale, 2018.

Apathetic and soporific. These words describe the state of public opinion and the media's attitude to climate change, according to French-Danish conceptual artist Thierry Geoffroy, alias Colonel. Little by little, his slogans – that wavered between “Before it’s too late” and “Tomorrow is too late” – were reduced to a simple "Too late". Paradoxically, it is in despair that he finds some consolation.

One of your most recent works consists of red neon letters that say “I give up”. Have you lost hope that we will win the race against climate change?

The answer is yes. I don't know if it's because I'm getting older or because the situation is getting worse. We no longer live in fear, we live in “it's too late”. But I don't think that means we’re giving up. For it is perhaps precisely this despair that will finally rouse sleeping consciences! Almost everybody is aware of climate change and the responsibility of human activity. And yet nobody, almost nobody, does anything.

The problem isn’t ignorance, it’s apathy. I have the impression we live in a world where planes fly across the sky day and night, spraying sleep-inducing substances that atrophy our consciousness. The media has a lot to do with this – they ignore the real causes of the extreme weather phenomena we are witnessing, so that we don’t question the system of production and consumption on which the power of the elites is based. Knowing that the same media is part of these same elites.

I think that artists have a role to play in raising awareness. They can detect the workings of media propaganda. They can show the public the real face of the problems.

That's the purpose of your Emergency Room project, isn't it?

Indeed, the essence of my work on climate change is to ask the question: “What’s the emergency?” Just as in hospital emergency wards, it isn’t possible to treat all emergencies at the same time – it’s necessary to identify those that need to be treated as soon as possible. It’s clear that climate change is the priority of all priorities. It is – and will be – the cause of many other emergencies: massive population movements, ecological problems, wars, etc.

So I imagined a project – or rather, a format that allows contemporary artists to urgently express themselves on the news transmitted by the media. They’re on the lookout, observing what’s happening around them and reacting almost in real time – creating a work that they display in the Emergency Room the next day, to discuss it with the public.

To give you an example, for the first Emergency Room installed at MOMA PS1 in New York, the Danish artist Søren Dahlgaard had produced – in the aftermath of very heavy snowstorms – fake copies of the world's most influential newspapers to draw public attention to climate change. The headlines announced disasters everywhere.

That was in 2007, and the public was really shaken by it. Today, no one would bat an eye seeing such topical headlines! But, as I was saying, that does not mean we should give up. I continue to set up Emergency Rooms all over the world. I’m counting on the fact that the debates taking place there will eventually win over and raise awareness among new audiences.

You use recyclable materials for your works. Is this a deliberate choice?

It’s the fact of working in the present that imposes this choice. I’ll go find a box in the street and write on it. I will spend more time trying to understand what’s going on and communicating with the audience than on polishing my work alone in my workshop or studio. There’s no time for perfecting. We must act quickly.

Critical Run is another art format you have created. What does it entail, and what’s the objective?

Critical Runs are in fact conferences on current topics, particularly climate change. But instead of participants sitting in a warm, comfortable conference room, drowsy from the heat and the whirring of projectors, they’re invited to debate while running!

Critical Run is a metaphor: either we run to save the world, as long as it’s not too late, or we run to save ourselves, because it’s too late. If it's really too late, we're not going to sit on chairs and leaf through the history of art.

In May 2019, you organized a Critical Run at the Venice Biennale to reflect upon the title of the 58th edition of this major international art exhibition: May You Live in Interesting Times.

Yes. And some good questions were asked during this race-debate. One of the participants discussed the main work of this year's Biennale, Barca Nostra (Our boat) by Christoph Büchel. This Icelandic-Swiss artist is exhibiting the wreck of a fishing vessel that sank in the Mediterranean in 2015, killing about a thousand migrants. Our participant suggested it would have been better to exhibit one of those cruise ships – which, through a chain reaction, causes entire populations to be condemned to migrate for climatic reasons – instead.

The Biennale should exhibit works that evoke the causes of problems and encourage us to try to solve them in time, not works that ironically embody our attitudes that it is “too late” and of us turning our backs.

The son of a soldier, French-Danish artist Thierry Geoffroy has adopted the nom de guerre,  Colonel, to indicate that he is fighting a battle: to raise public awareness of climate change. Originally a photographer, Geoffroy has been touring art fairs, galleries and museums in many countries for over a decade. He invites himself, even when not invited, to communicate his messages. Author of several books and manifestos, he has produced more than twenty films for Danish television and as many solo shows in museums.