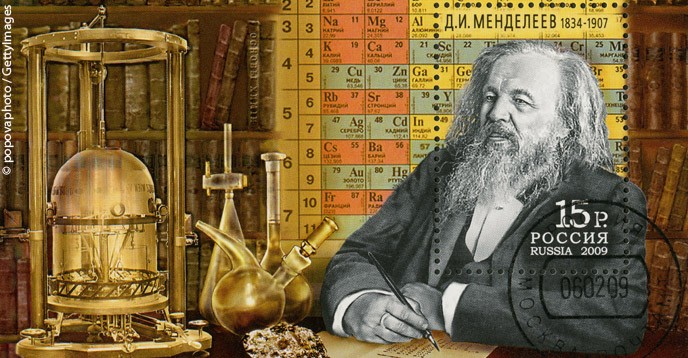 1 March 1869 is the date of a discovery that changed the course of science in the world. On that day, Dmitry Mendeleev completed his work on the periodic table of elements, which would play a fundamental role in the future of chemistry, physics, biology, astronomy and geochemistry – but also in what is now termed sustainable development.

The United Nations proclaimed 2019 as the International Year of the Periodic Table of Chemical Elements, to mark the 150th anniversary of the publication of the first model of the periodic table in the Review of the Russian Chemical Society by the illustrious Russian scientist Dmitry Mendeleev, considered one of the fathers of modern chemistry. At that time, when knowledge of the structure of the atom was largely imprecise, periodic law could only be formulated by a man endowed with an extraordinary predictive power, the intuition of a genius.

Yet, in Mendeleev's bibliography, less than one-tenth of his research is devoted to chemistry. The overwhelming majority of his work concerns other scientific fields, including aeronautics, meteorology, Arctic exploration, ice-breaker design, popular education, the denunciation of spiritualism, legal expertise and economics – to name a few of the issues in which this encyclopaedic mind was interested.

Much of his research was devoted to what we now call the concept of sustainable development, the rational management of natural resources and ecology. Although, obviously, these fields of knowledge and academic disciplines did not exist at the time, the scientist perceived the need to prevent the excessive exploitation of natural resources – to inform people about the exhaustibility of minerals, and to call for the parsimonious consumption of oil, water and coal. Mendeleev stressed the need to focus on coal gasification and to change the methods of extracting and transporting oil. He advocated the respectful use of the soil in order to improve its fertility. He reflected on the modernization of Russia.

Mendeleev was fiercely critical of what we now call oligarchy and corruption. He believed that any possibility of a monopoly of natural resources should be eradicated. But these warnings were not heeded either at the time or in the twentieth century, when Russia privatized its oil and mining deposits. In the nineteenth century, the powerful oil and coal oligarchy fought an implacable and victorious battle against Mendeleev, to prove that he was not a great scientist.

Even the members of the St. Petersburg Academy of Sciences eventually chose Fedor Beilstein (whom only a few specialists can remember today) over Mendeleev when they had to elect a new colleague to their institution. They cited the modest amount of research Mendeleev had carried out in the field of chemistry.

No one is a prophet in his own land. Yet Mendeleev's prophecies about natural resources management – and sustainable development in general – are just as important as the periodic law and the periodic table of elements, which raised his name to the ranks of the most famous Russian scholars.

The International Year 2019, and the worldwide recognition of the periodic table of elements, underline once again, the need to develop systems in our chaotic world. After all, it is systems that allow us to understand the very idea of regularity and give us the predictive capacity to meet the challenges of sustainable development.

A Russian chemist and professor at the D. Mendeleev University of Chemical Technology of Russia, Dmitry Mustafin is an author, presenter, scientific editor and guest expert on numerous television programmes and films for the general public.

Co-Chair of the International Year of the Periodic Table of the Elements Interunion Management Committee, Russian scientist Natalia Tarasova is director of the Institute of Chemistry and Problems of Sustainable Development at the D. Mendeleev University of Chemical Technology of Russia. She is one of the pioneers of sustainable development research in Russia.