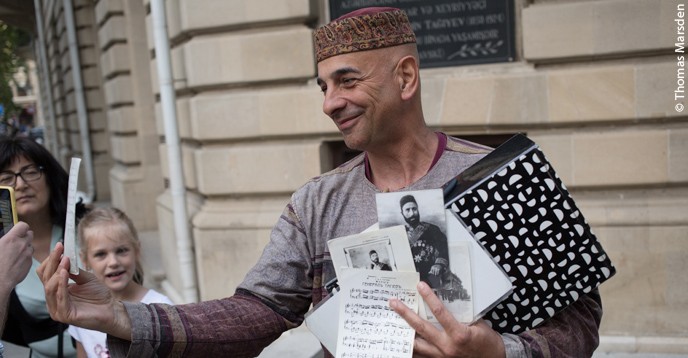 Several millennia old, the fortified city of Baku, the capital of Azerbaijan, retains traces of the presence of the Zoroastrian, Sassanian, Arabic, Persian, Shirvani, Ottoman and Russian peoples. The modern city, born from the first oil boom in the late nineteenth and early twentieth centuries, has an equally eclectic cultural heritage. Because of its bay and its proximity to caravan routes, the city has always been crossed by multiple currents. The result is an extraordinary harmonious diversity, reflected both in its architecture and its cosmopolitan spirit.

When did Baku become a modern city?

Baku began to become a modern city in 1872, when the Russian tsarist power established what is now called a concession for oil field development. From that moment, known in history as the first oil boom, the city experienced rapid development that resulted in an extraordinary growth of its population – which  increased tenfold in the first twenty-five years, then doubled every seven or eight years.

While Baku had 14,500 inhabitants in 1872, it had a population of 215,000 at the beginning of the First World War. Of course, no city can grow at such a speed in a natural way. This demographic growth is due, above all, to immigration, which was attracted by the country's wealth. It should not be forgotten that at the very beginning of the twentieth century, Baku provided more than fifty per cent of the world's crude oil.

That was when a new city began to take shape around the old fortified city, which was several millennia old (a World Heritage Site since 2000). It was planned at the time of the Imperial Russian administration and built thanks to local millionaires, who invested in projects by European architects. This transformed the city into a real patchwork of cultures.

The oil magnates of Baku were keen to get closer to Europe, and this desire was also reflected in the architecture. They invited renowned architects to the city, who were mainly of Polish descent, among whom were Kazimir Skurevich, Konstantin Borisoglebski, Eugene Skibinski, Jozef Goslawski and Jozef Ploszko.

This new city became so sumptuous that it would be nicknamed the Paris of the Caucasus.

Did turning to the West mean turning away from the past?

In no way were the local oil tycoons trying to erase their past! Quite simply, they were receptive to cultural influences from outside, such as the European spirit that came to them through Russia. But this did not mean that they lost their cultural particularities.

So, for example, the vast majority of the frescoes that I have had the opportunity to see in my life, I found in ancient Azeri houses – although traditionally, they were prohibited by the Islamic religion.

An extraordinary interpenetration of cultures took place in Baku, at all levels, including architectural and artistic. For example, Murtuza Mukhtarov, who was a famous drilling wizard, had mosques built in his native suburb of Amirajanin near Baku, and in Vladikavkaz (Russia), the hometown of his wife. He later erected a fascinating French Gothic palace for her, which still adorns Baku’s downtown.

One detail deserves attention: the imposing shape of this palace takes after the stately image of its owner! Just like the neo-Renaissance palace erected by Dmitri Mitrofanov reflects the sturdy appearance of this other nouveau riche (I use this term in its positive sense) man who came from the province of Perm to make his fortune in the oil industry. The same applies to Isa Bey Hadjinski's palace, built on six levels and mixing a variety of styles: from neo-Baroque to neo-Gothic and Modern.

These similarities are so striking, they inspired this verse by the Russian poet Alexander Gorodinsky: “I am there, not knowing where to go, / standing, in the morning wind of Baku, / among its houses so similar to their masters, / from the outside, as from the inside.”

To a certain extent, this challenging individuality resulted from the wish of  the newly rich Baku elite to outdo each other. The orders they placed were more or less like this: “I want the same entrance as Taguyev, the same balcony as Mukhtarov, the same dome as Dadachev and the same window, say, as Mitrofanov, and something more of my own inspiration!” From this competition between millionaires, who wanted to impress their competitors, emerged the unusual style of Baku architecture of the late-nineteenth and early-twentieth  centuries – which is impossible to classify in any of the known genres of Western architecture.

But who was actually doing the work?

The local craftsmen, of course. The architects were able to take full advantage of the ambitious orders of the Azeri millionaires, equipped with unlimited resources, to enhance the value of stone – the only construction material available in this desert region.

The stonemasons of Baku enjoyed a great reputation at that time. They were said to be born with chisels in their hands! But they did not have knowledge of figurative art, which is forbidden by Islam, according to some interpretations. An Italian sculptor, Antonio Franzi, was brought in to teach them this skill.

Although the architects borrowed motifs from different cultures, their approach was never a ‘copy-paste’ one. It was perceived through deeply-rooted local traditions and executed in fine local sandstone in quite an impeccable manner. The different influences coexist side by side, so to speak. This gives a special cachet to Baku's architecture, which reflects the multicultural dimension of its population, from the first oil boom to this very day.

What was the ethnic composition of the city at that time?

At the beginning of the First World War, the majority ethnic groups each represented about a third of the population: thirty-six per cent Russians and thirty-four per cent Azeris, about one third of whom came from Iran. There was also a rich and prosperous Armenian community in Baku, representing nineteen per cent of the population. About four and a half per cent of them were Jewish, followed by Germans, Poles, Georgians, Greeks, Tartars, etc.

The Jewish community enjoyed a tolerant environment in Baku and did not fear persecution. They provided the city with nearly forty per cent of  the doctors and more than thirty per cent of the lawyers. The Rothschild, Landau, Cohen and Itskovich families were among them. Together with the Poles and Germans, they constituted Baku’s upper middle class.

The Azeris, for their part, were the core of the middle class. They owned eighty-one per cent of the real estate during Baku’s oil boom. The billionaire Moussa Naghiyev, for example, who had started as a field worker and ended up as the richest Azeri oil baron, was also one of the local real-estate moghuls. Many of them had grown rich very quickly, without having had the time to obtain any formal education. Often, these first-generation local industrial magnates could barely read or write. One of these illiterate oil barons was Hadji Zeynalabdin Taghuyev, who nonetheless founded the first secular school for Muslim girls in 1901, and the first European theatre in Baku.

How did these communities relate to each other?

The Azeris in general did not take a negative view of the foreigners who came to settle in the city. This made it possible for the different communities to live together in peace, and even solidarity. Local Muslim millionaires frequently made donations for the shrines of other faiths. For example, for the consecration of the Alexander Nevsky Cathedral in Baku – the largest Orthodox church in the South Caucasus (demolished by the Communists in the 1930s) – Hadji Taguyev donated 10,000 roubles.

The process of Azerbaijan’s integration into the Soviet Union started in the early 1920s. What changes did this bring to Baku?

In terms of architecture, the Soviet influence was first felt through a set of landmarks with strong Oriental influence in the 1920s. The Sabunchi train station in Baku is vivid proof of this National Romantic style, conveying the desire of the new Soviet administration to win the hearts of the local population by turning back to their architectural past. This trend gave way to constructivism in the 1930s, which introduced modern buildings with cubic shapes and flat roofs into the Baku landscape. Many felt that this architecture was a harmonious addition to traditional architecture, of which the flat roof was one of the main features. Thus Baku easily assimilated this novelty, as it had so many others in previous decades.

The Stalinist Empire style of the 1940s and 1950s was heavily impacted by a plethora of architects trained at the Soviet school, such as Mikhail Useinov, Sadik Dadachev, Konstantin Sentshikhin, Elbay Gasimzade and others. They managed to adorn this very heavy and pompous style with elaborate details featuring the Oriental legacy, and thus made the Stalinist era architecture in Baku very site-specific, interpreting it through a local prism.

If you had to summarize the main feature of Baku's architectural heritage in one word, what would you say?

Eclecticism! And I would add immediately: a very site-specific eclecticism that is due to the deeply-rooted local traditions on the one hand, and the spirit of competition and openness on the other. And it is this openness of spirit which explains, for example, the strange similarity between the flamboyant Gothic Venetian Ca’ d’Oro and the sumptuous Ismailiyya palace which Moussa Naghiyev donated to the Muslim Charity Society of Baku, to honour the memory of his son, Ismail.

The "city of winds" well deserves its nickname in the literal sense, but also in the figurative sense of the term – swept as it was by these winds that came from elsewhere, yet, never losing its unique and cosmopolitan identity.

This article is published to mark the occasion of the 43rd session of the World Heritage Committee, held in Baku, Azerbaijan, from 30 June to 10 July 2019.

The fortified city of Baku

A great lover of Baku, Fuad Akhundov is known for his unusual tours of the city, during which he presents each place by juxtaposing his photographs of yesterday and today, using the hundreds of archive photos he carries in his immense portfolio. Akhundov is the author of articles, films and television shows, including The Baku Secrets.