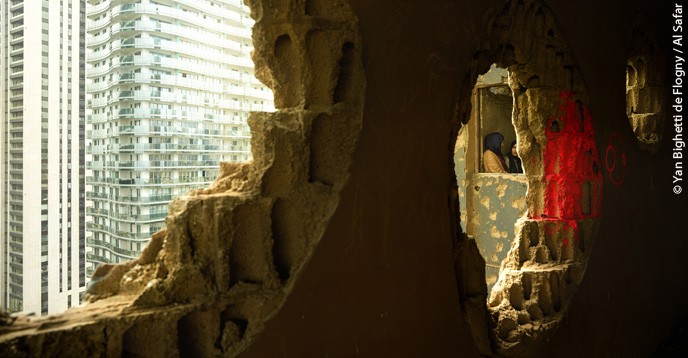 French photographer Yan Bighetti de Flogny was in Pakistan when, in the course of a conversation with a hotel owner, he learned of the existence of Ibn Battuta, the fourteenth-century Moroccan explorer. Unfairly little-known, Ibn Battuta is “perhaps the greatest traveller who has ever lived”, as an article in the Courier of August-September 1981 tells us.

“At the age of 21, he started his travels by undertaking a pilgrimage to Mecca. This was the start of thirty years of wandering, during which he would travel almost 120,000 kilometres and visit all the Muslim countries. In the course of this great journey, comparable only to that of Marco Polo, he visited Mecca four times, became a judge in Delhi and in the Maldive Islands, accompanied a Greek princess to Constantinople, sailed to Sumatra and Java, and journeyed to China as ambassador of the Sultan of India. Then, in 1349, he returned briefly to his own country (“the best land in the world”) before setting off immediately to the kingdom of Granada and after that on a journey through Africa to the Niger basin. The diary which Ibn Battuta dictated to a scribe during his travels is a source of the first importance for the history of the Muslim world of his time, especially for the history of India, Asia Minor and West Africa.”

The story inspired our photographer, whose reporting project on the fight against cultural prejudices had been maturing for years, but lacked a common thread. Which he had now found: Yan decided that he would embark on a long journey, in the footsteps of Ibn Battuta! The project was launched in March 2018. It will take three years and cover more than twenty countries, from Morocco to China, following a similar itinerary to the one undertaken by the Moroccan explorer seven centuries earlier.

Yan and his team are currently halfway through, trying to “restore some accuracy and a little bit of colour to this Muslim world, wrongly disparaged in the West”. Every time he comes home, he is disturbed by the gap between the way the people around him look at this unknown world and the reality he witnesses during his travels: “the warmth, the hospitality, the deep generosity, and especially the people, who have the same dreams and the same sorrows that we have.”

The ardour of youth

Arab youth, with their unwavering determination to choose their own destiny, have emerged as one of the pillars of the project. It is to them that the Courier dedicates this photo reportage,  published on the occasion of International Youth Day, 12 August.

The desire to live and to change their lives is what unites young people from the Middle East and North Africa (MENA). “Wherever you are, you really feel a common energy. I found a lot of similarities in their way of life, in their vision of the future,” explains Yan. “Sometimes I think it’s the elders who have remained stuck on certain disagreements that young people only want to forget.”

Faced with the highest youth unemployment rate in the world, forty-nine per cent for women and twenty-seven per cent  for men, the region's youth are not giving up. “I didn't sense any negativity or lack of hope,” says the photographer. “The problem of unemployment is worrying, but many of the other challenges facing the region until twenty years ago – such as access to education, clean water and sanitation – are less prevalent today.”

According to the World Bank, two out of three people in the MENA region are under the age of 24. The demographic weight of Arab youth makes them a living force and gives them a central place in the Arab societies of tomorrow. “The spark has been ignited,” says Jan. “They won't give up, they know what they want, and in my opinion, they have taken the right path to get there.”

Produced by the international cultural platform Al Safar (voyage in Arabic), the project In the Footsteps of Ibn Battuta is in progress in partnership with UNESCO, the French digital edition of National Geographic and MiSK Art Institute.

Sunset over the Hassan II Mosque in Casablanca, Morocco, 2018. In the foreground are dancers of the Lhiba Kingzoo hip-hop group, founded in the city in 2005.

Football game in the heart of  the historic city of Jeddah, Saudi Arabia (2019), inscribed on UNESCO's World Heritage List. 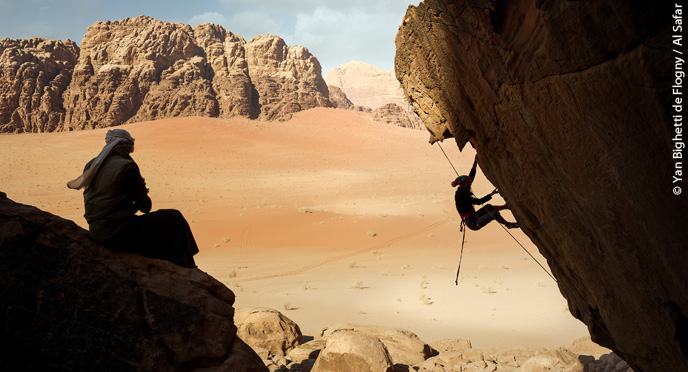 Jana, 16, a champion climber, often scales the high rocks of Wadi Rum, Jordan, 2018. The protected area is on the UNESCO World Heritage List.

A play of reflections at the El Mechouar palace, Tlemcen, Algeria, 2018, dating from the Middle Ages.

A peaceful evening on the corniche, Tripoli, Lebanon, 2018. An admirer of the great Orientalist paintings, the photographer composes his shots on several levels. The first view from a distance allows the staging and colours to be observed. Then, as the viewer gets closer, more details can be examined.

Three young women captured in a suspended moment amidst the perpetual goings and comings of trams in Alexandria, Egypt, 2019. 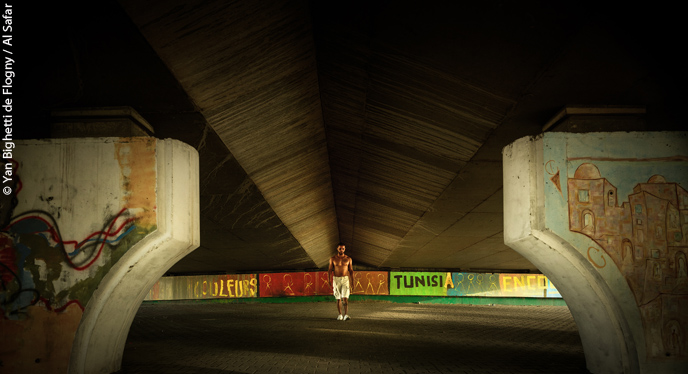 Rochdi Belgasmi under the  Republic Bridge in Tunis, Tunisia, 2018. This young dancer, whose notoriety continues to grow, has had to fight to have his innovative vision of dance recognized. 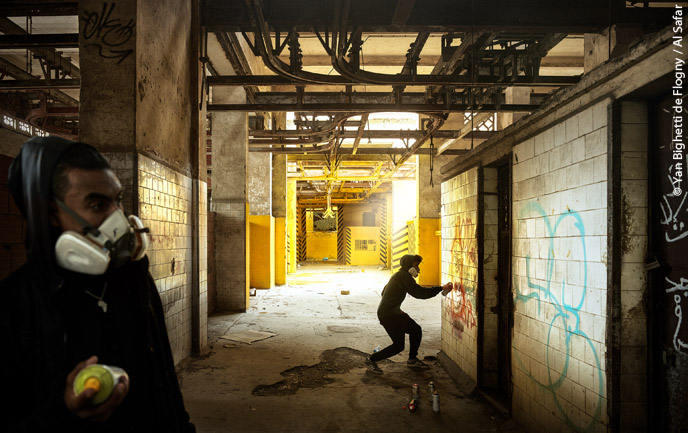 The graffiti artist Ed One in action, Casablanca, 2018. The Moroccan city’s former slaughter-houses have now been converted into a cultural space dedicated to urban and contemporary arts.