Global warming cannot be considered as only a matter of degrees Celsius. It is one dimension of the global ecological crisis, a direct consequence of the complex relationship between humans and nature, but also between science and politics, asserts Bernard Feltz (Belgium). According to him, science bears a heavy responsibility for the emergence of the climate problem. The same is true of politics: climate change denial has seriously hampered efforts that could have saved us from the current climate emergency, adds Catriona McKinnon (United Kingdom), before asking whether criminal law should be used to counter climate change. Indeed, notes Anne-Sophie Novel (France), more and more citizens and non-governmental organizations (NGOs) around the world are going to court to demand climate justice. And they sometimes win their cases – something that would have been unimaginable only six years ago. 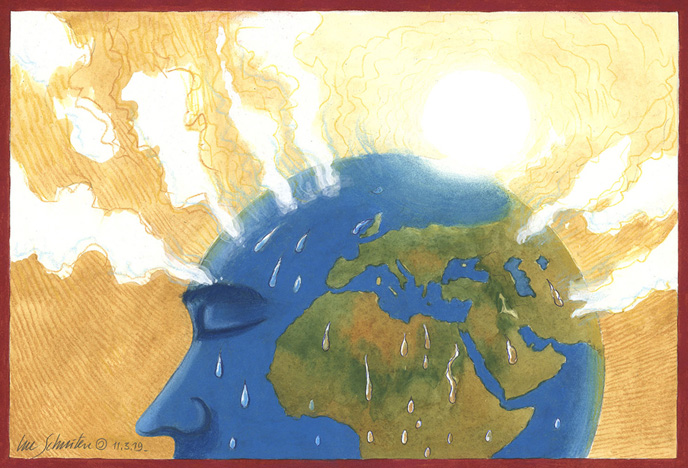 While many politicians are working to support green industries, is this a solution to the problem of climate change? Yes, but only if social justice is part of the equation, replies Thiagarajan Jayaraman (India), while specifying that this is rare, both at the national and international levels. The fight against global warming and the fight against poverty are one, says Zofeen T. Ebrahim (Pakistan), who illustrates her point with a project to plant ten billion trees in her country. Another example of the use of green energy is the installation of solar pumps and lamps, which is radically changing the lives of rural communities in Africa, explains Victor Bwire (Kenya).

If we want to build a carbon-free society and avoid the nightmare that has been predicted, we must start with cities, insists Manuel Guzmán Hennessey (Colombia). Cities account for three-quarters of greenhouse gas emissions and consume two-thirds of the world's energy. This is why they have a special role to play in producing innovative and technological solutions to the climate crisis, as Hastings Chikoko (Malawi), Regional Director for Africa of the C40 Cities network, points out.

As the most vulnerable cities are located in developing countries, global solidarity can, and must, play a crucial role. Yet, the wide disparities in the world – both the cause and the consequence of climate change – prevent humanity from closing ranks and cooperating, says Johan Hattingh (South Africa). Just as worried is the Danish-French artist Thierry Geoffroy, alias Colonel, who feels as if he is crying out in the wilderness, but refuses to give up. Astonished by our collective apathy, he set up Emergency Rooms around the world and organized Critical Runs, hoping to raise awareness. The same hope motivates Arshak Makichyan (Russia), whose struggle is becoming less and less solitary as the months go by.

In the Ideas section, we also look to the future of humanity – but this time as seen from the perspective of artificial intelligence. In the Zoom section, we travel to meet Arab youth, who follow in the footsteps of the Moroccan explorer Ibn Battuta seven centuries later. And Our Guest invites us visit Baku, the capital of Azerbaijan, which hosted the 43rd Session of the World Heritage Committee in July 2019. The Current Affairs section takes us to South Africa, twenty-five years after Nelson Mandela came to power. Another great figure, Dmitri Mendeleev, is also featured in this issue, on the occasion of the International Year of the Periodic Table of  Chemical Elements.