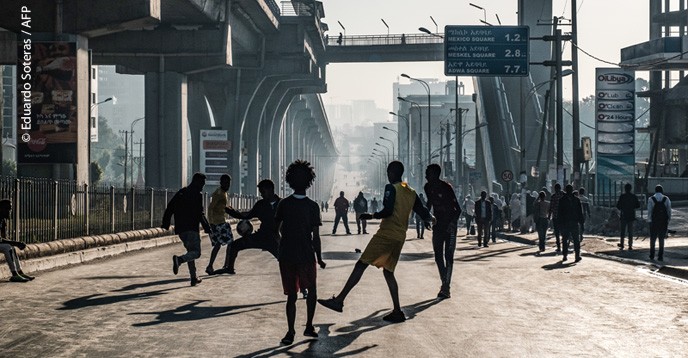 Street scene of the third edition of Car-Free Day, 3 February 2019, in Addis Ababa, the Ethiopian capital.

Ninety-four megacities around the world have come together to form the C40 network. Their aim is to share their experiences of combating climate change and its effects, and to set ambitious goals for the reduction of carbon emissions.

The inhabitants of Addis Ababa have the impression that they live in the middle of a construction site. As they say, “Head out on one road in the morning and you might find it blocked off for a development project by the evening!” The Ethiopian capital is a massive  continental hub with an exploding population of people fleeing from unrest and the lack of opportunities in the country’s poverty-stricken provinces. At the current growth rate, the number of inhabitants is expected to double in thirty years.

Some economists have called Ethiopia an “African lion”, for mimicking the success stories of Asia’s economic tigers. But this economic success and the accompanying population growth – one of the highest in the world – come at a price.

Although its carbon emissions are still modest, Ethiopia is one of the countries in the world that is most vulnerable to climate change. The variable rainfall and rising temperatures cause recurrent droughts and famine. The problems related to climate change are exacerbated by rapid urbanization, as multinational clothing-retail companies like Calvin Klein and H&M establish garment factories here, taking advantage of some of the lowest wages in the world.

In May 2018, Addis Ababa – along with seven other African cities – made a commitment to reduce its carbon dioxide (CO2) emissions. This means it will have to rethink its transport, energy production and waste management strategies.

Meanwhile, Ethiopians complain that concrete progress in the fight against pollution and traffic congestion remains elusive. "The pollution is increasing and people are getting sick," says Biniam Getaneh, 30, one of the 3.5 million inhabitants of the capital.

Leading the way on climate action

Addis Ababa is a member of C40, a network of cities representing over 700 million people and a quarter of the global economy, which have been working together since 2005 to reduce greenhouse gas (GHG) emissions.

For Hastings Chikoko, the Regional Director for Africa at C40’s Cities Climate Leadership Group, it is clear that cities have an important role to play in producing innovative solutions and technologies to address the climate crisis. “As cities have private sector and research institutions within their boundaries, we see them coming up with innovation, being able to demonstrate to national governments that climate change mitigation and adaptation work, and  can be upscaled to the national level.”

Chikoko, a Malawian economist with long experience in climate change, points to positive experiences in Accra (Ghana) and Tshwane (South Africa), where traffic congestion has been  eased by transportation initiatives, while significantly reducing CO2 emissions.

While acknowledging the difficulties faced by the capitals of many of the world’s poorest  countries in particular, Chikoko says he remains optimistic – pointing out that some cities have decided to exceed the goals of the Paris Agreement 2015 (COP21).

The C40 Cities network is working to promote local climate initiatives at the national level, such as facilitating municipal representatives to integrate with government teams participating in international platforms. “We have ensured that some C40 mayors take part in delegations whenever possible,” explains Chikoko. “That way, they can use their best practices from the local level and raise their voices in decision-making processes.”

Also, in the context of the scarcity of local finances, municipalities are struggling to allocate budgets in the fight against climate change. C40 provides support for capacity-building, to enable city officials to access alternative financing.

“During the Paris climate summit, we launched the C40 Cities Finance Facility. We identify big projects and help cities to identify the challenges and to transform these challenges to bankable projects that can be financed, for example, by the World Bank,” Chikoko adds.

Technology transfer is another central aspect facilitated by the network. “Some solutions really depend on cities being innovative. This could be green buses, or  it could be technology for water efficiency. This is an area where African cities are lagging behind. There is also a value in identifying cities that are advanced in terms of cleaning technology, for example. We are then able to facilitate knowledge transfer as well as technology transfer from those cities to other  cities in Africa, for instance.”

Another obstacle to climate change at the city level is often the lack of adequate plans. A fundamental objective of the C40 network is to ensure that the cities involved have common data references and measurements, enabling them to assess and compare their progress.

Accra’s mayor, Mohammed Adjei Sowa, was supported by the C40 network to gather credible data on which to base decisions for the city’s waste management plan. Waste  generation plays a significant and growing role in carbon emissions.

“The mayor is now collaborating with the private sector to establish an efficient waste collection service,” explains Chikoko. “Other African cities can learn from this: first, illegal dump-sites must be banned. Secondly, you must make sure you have an efficient system that gives residents an incentive to abide by the rules.”

Transportation is another major source of carbon emissions – it is in this sector that global GHG emissions are rising the fastest.

The city of Tshwane – created in 2000 by the merger of thirteen municipal entities, including Pretoria, the administrative capital of  South Africa –  is part of C40’s Mass Transit Network, which brings together member cities that have shown innovation in this field.

"This metropolis of more than three million people has worked to improve its public transport network, making it comfortable enough to encourage car owners to use it. It has improved its transport infrastructure to include dedicated bus lanes. This is also one of the cities that have completely changed the source of energy of their buses from oil to gas.”

The lessons learned in areas of transportation or waste management in C40 cities including  Tshwane, Accra or Chicago can inspire action in an overpopulated and congested city like Addis Ababa. When the Ethiopian capital launched its plan for a bus rapid transit system, it sent a delegation to Tshwane to learn from its experience.

Improving the public transport in Addis Ababa is part of the national Ethiopian Green Economy Strategy, launched in 2011. The Ethiopian government is currently revising its environmental policies, taking climate change into account, according to Chikoko. “It will contain measures for cities in different parts of the country to be climate-change resilient and to minimize their carbon emissions while developing.”

“The role of C40,” concludes Chikoko, “is essentially to connect cities that are trying to implement solutions to reduce carbon emissions and to help cities to inspire each other.”

A Danish political scientist, journalist and author, Niels Boel has collaborated with Denmark’s most prominent media. He is also a director of films about the environment and human rights issues (www.vffilm.dk).

A Danish cultural sociologist, Finn Rasmussen works with international development. Head of the Department for Africa at International Media Support (IMS), he has authored books  on the media and international affairs.

A freelance journalist from Ethiopia, Hadra Ahmed is a member of the Ethiopian Environment Journalists Association and covers a broad range of issues, including climate-related topics.