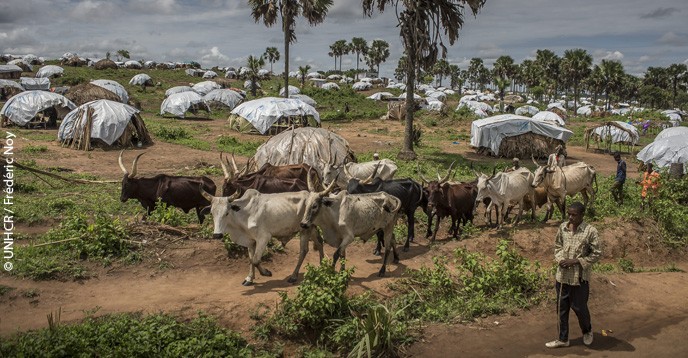 Habituated to the livestock market in the border village of Gbiti (Cameroon), the Central African Mbororo herders took refuge there in 2014, fleeing the violence in their country.

Recognized internationally, the indigenous peoples of Africa cannot always count on being granted the same recognition in their own countries. The Fulani Mbororo community, for example, is a long way from fully enjoying its rights, according to one of its strongest advocates, Hindu Oumarou Ibrahim. She is coordinator of the Association des Femmes Peules Autochtones du Chad (AFPAT, the association of indigenous Fulani women of Chad).

What is the status of the Mbororo in Chad?

Thanks to the United Nations Declaration on the Rights of Indigenous Peoples, we have regional recognition from the five countries in which we are distributed: Cameroon, Central African Republic, Chad, Niger and Nigeria. However, at the national level, there are no laws that protect or recognize indigenous peoples.

In 2014, the current President of Chad, Idriss Deby Itno, who was then president of the Economic Community of Central African States, participated in the Third Edition of the International Forum of Indigenous Peoples of Central Africa (FIPAC 3), held in Impfondo, Republic of  the Congo. At this international meeting on traditional skills and the green economy, he gave a speech in support of indigenous peoples. It was a considerable political endorsement and a very strong message in our favour. But the impact of this speech fizzled out – it was not published afterwards and remained ineffective.

How would you describe the living conditions of the Mbororo?

As unacceptable. At the very least, members of my community should be recognized as citizens of a country. However, half of them – particularly the women and children – do not even have a birth certificate. How then can they have rights? Without this essential document, it is impossible to obtain identity cards, passports, or access to education and health care. If a patient comes to the hospital without a birth certificate, not only is he the last to be examined, but he also risks receiving inappropriate care, since his age and needs are not known to the doctors.

Though many papers and directives do exist, in actual fact, we are on our own.  We do not even have access to safe drinking water. The Mbororo drink the same water as animals – this promotes diseases that make them even more vulnerable.

Could you tell us more about AFPAT? What are the association’s projects since its creation in 1999, and especially since it obtained legal status in 2005?

Our main objective is to improve the living conditions in our community, and our work is supported by two programmes. The first focuses on the protection and promotion of human rights and the rights of indigenous peoples, in line with  national and international declarations on the subject. The second concerns the protection of the environment, as provided for by the three Rio Conventions, which emerged from the United Nations Conference on Environment and Development (UNCED, 1992). They focus on climate change, biodiversity and desertification.

In practice, we raise awareness of basic social rights through training sessions in education or access to health care. We also educate communities about access to justice – given their marginalization and the violence they suffer, it is essential to tell them that they have the right to justice and equity.
With regard to the protection and promotion of the environment, we organize training sessions and discussions with communities on adaptation to climate change and the importance of traditional knowledge and know-how for adaptation.

What results have you achieved through these awareness campaigns?

One of our successes is the creation of health centres adapted to nomadic communities, for example. We have also succeeded in integrating women into community debates. Now, women and men sit together to discuss their future.

At the legislative level, we contributed to a reform of the pastoral code, which dated back to 1958 and had become obsolete: the demography and environment have changed enormously since then. We are not entirely satisfied with the reform, but it is already a kind of victory for our association.

With regard to education, it must be understood that nomadic communities do not reject school, contrary to what is often thought. They simply want a school with programmes and schedules that are adapted to their way of life. Nomadic children have less need to know the history of world wars or the history of France than to learn how to manage natural resources, such as water, or about conflicts between communities. They also need teachers who understand their culture and master their language, which is essential for learning.
The creation, in 2012, of the directorate for the education of nomadic children was very encouraging news. This body took into account the needs of nomadic communities and set up pilot programmes adapted to the lives of their children. But for now, the Mbororo do not benefit from it.

What do you think of the Biosphere and Heritage of Lake Chad (BIOPALT) project?

The project holds great promise for the restoration of the ecosystems of Lake Chad, the preservation of its resources and relations between the peoples of the neighbouring countries. What worries me is that it takes time to establish priorities, create protected areas, put in place pilot projects – time is running out and the budget is being used up before any concrete results are delivered.

In my opinion, this project will make a difference if the experts in charge of it establish a relationship of trust with the indigenous peoples. They have lived in these places for centuries; they are not just passing through, like some politicians. It is with, and for these, populations that the project must be successfully completed.

Born in Chad in 1984, Hindou Oumarou Ibrahim travels to international summits to raise awareness among the world’s leaders about the rights of indigenous peoples and climate change. In 1999, she helped found AFPAT, an association of the indigenous Fulani women of Chad, to improve the living conditions of her community, the Mbororo.