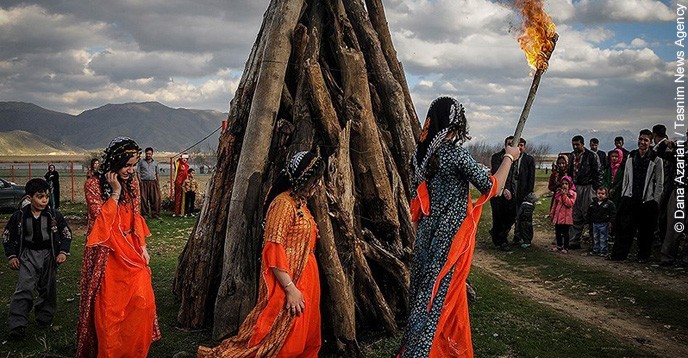 Celebration of Nowruz in Iran.

From the cult of the vegetation god Osiris in ancient Egypt to the summer solstice celebrations in Sardinia, Italy, to the Maronite feast of Eid el Burbara in Lebanon and the ceremonies of the Piramalai Kallar in Tamil Nadu, India, the symbol of the sprouted seed plays a central role in many rituals. Wheat, barley, or lentil sprouts are also at the heart of Nowruz – the New Year of the peoples who were once part of the Persian Empire – celebrated each spring by around 300 million people worldwide. But why are the shoots thrown into the water?

In the belief systems of all the world’s peoples, as time completes its annual cycle, there is a great risk that humankind will perish. They believe that performing rituals will allow them to go beyond this cycle. The New Year festivals, often celebrated to usher in spring, herald the rebirth of nature.

Nowruz, which literally means “new day”, is one of these. Its origins, which date back at least two thousand years, are unclear, but the tradition is alive and well and celebrated in all the countries that were once part of the Persian Empire.

In Iran, the centre of ancient Persia, preparations begin two or three weeks before Nowruz. Women begin to “shake” their houses – performing a massive spring cleaning. On the Tuesday before the festival, the men organize games which involve jumping over fires. Meanwhile, children put on masks and go from house to house in small groups, knocking on doors, hoping to receive cakes or  coins. This tradition is reminiscent of Halloween, a holiday now associated with All Saints’ Day in the English-speaking and Celtic worlds; and Koliada, a Slavic winter solstice festival, which has, over the years, become part of Christmas celebrations.

Going back to Iran: when the day of the vernal equinox dawns, the beginning of the festivities is announced by the sounds of the drum of Haji Firouz, a kind of king’s jester with a blackened face. Every home – including Iranian households in the diaspora – sets up a table with haft sin, or seven items, all beginning with the letter ‘s’ (sin). They are the sabzeh (sprouts of wheat, oats, lentils and other seeds), sir (garlic), sib (apple), summak (sumac), senjed (the jujube fruit), serkeh (vinegar) and samanu (a wheat pudding made by slow-cooking ground wheat sprouts).

Sometimes a mirror (aine), cakes or coins are added. The Koran may also be placed on the table (having replaced the Avesta, the sacred book of the Zoroastrians), but also some poetry. For example, The Divan of Hafez, by the Persian mystic poet famous for memorizing the Koran, is often used for divination.

The family meal includes fish and rice, but the centrepiece of the table is always the sabzeh. The seeds have been sown by women, on plates inside the house at the beginning of the festivities, and constantly watered so the young green shoots are ready on Nowruz.

The origins of the sprout ritual are difficult to determine. The oldest references go back to the Germinating Beds of Osiris of Ptolemaic Egypt – a tradition in which soil was moulded into the shape of figurines, representing the god of the dead and resurrection to eternal life. and placed reclining in tombs. The pottery bricks, made of earth kneaded with water and barley grains, were placed in tombs in a reclining position.

In Ancient Greece, in the fifth century B.C., seeds of spices, corn and grains were planted in terracotta or basketwork containers. Called Gardens of Adonis, they were germinated to honour the mortal lover of the goddess of love, Aphrodite during the festival of Adonis, held in mid-July every year.

In contrast, there is no mention of ritual sprouts in the Avesta, or in Persian writings on Nowruz. Nor are sprouts a part of the rituals observed by the Parsis, the followers of the Zoroastrian religion who fled from Persia in successive waves to India between the seventh and tenth centuries, following the Arab conquests of their country.

Yet the custom of sprouted seeds endures, as the centrepiece of the haft sin table, around which some 300 million people across the world gather each spring to celebrate Nowruz.

The sprouts tradition might have spread from South India, where they are still used in ceremonies. According to the French ethnologist Louis Dumont, women belonging to the Piramalai Kallar  community in Tamil Nadu, who want to fulfil their vows, balance  pots on their heads – filled with various items, including sprouts obtained by “germinating seven or nine seeds in a container in the dark for a week.”

In the Judeo-Christian tradition

In Europe too, the new shoots are central to various festivals. In Provence, France, on 4 December, Saint Barbara’s Day, it is the custom to germinate wheat grains from the previous harvest in three cups and to place them on the table of  the “grand supper” on the twenty-fourth. They are then placed in the crib of the Nativity scene. The same tradition exists in Lebanon among the Maronite Christians of Arab ethnicity, and in Sicily, Italy, among the inhabitants of Castelbuono in Palermo.

On 19 March, Sicilians also decorate Saint Joseph’s Table with shoots, along with up to 101 delicacies. This is to celebrate both the virtues of poverty, represented by the saint, and those of wealth, represented by the wheat – in particular by the bread, baked for the occasion using elaborate recipes.

In southern Italy, on the Holy Thursday before Easter, shoots are placed on the altar in the oratory where, according to Catholic liturgy, the Eucharist is kept. Meanwhile, the Jewish community in Rome maintains a ritual custom of shoots that dates back to the Middle Ages, during the festivals of Rosh Hashanah and Yom Kippur.

Our European tour ends on 21 June, the summer solstice, in the small town of Bari Sardo in Sardinia, Italy. Here we can witness a procession of women carrying nenniri, or shoots, on their heads in containers – topped by an impressive cane structure, decorated with delicately-shaped breads and seasonal fruit. The women walk through the streets to the sea, into which they throw their nenniri.

In South India, too, the Kallar women form a procession, carrying shoots on their heads. They end their ceremonial journey by dancing around the shoots before flinging them into the water.

In Ancient Greece, the Gardens of Adonis were also consigned to the water, in fountains or the sea, after being carried over roof terraces – just as Mazdaean Iranians still do today in Yazd, and elsewhere in Iran.

In Iran, on the thirteenth day after Nowruz, everyone spends the day outdoors – eating, playing, singing and performing the final ritual: throwing the shoots into running water. But not before the girls have braided a few strands of the shoots, making a wish to find a husband in the coming year.

Nowruz is one of those celebrations that bring together societies that are distant from each other, both in space and time – the periodic return of vegetation is seen as a symbol of a new beginning of life. But while their germination symbolizes a renewal, the seeds also carry within them, all the troubles of the year that is ending. This ambivalent nature of the shoots makes it necessary to get rid of them, letting the waters carry our ills far away from us.

Nauryz, Navruz, Nawrouz, Nevruz, Nooruz, Novruz, Nowrouz, Nowruz! So many ways of writing the same word for this new year and spring festival celebrated notably in Afghanistan, Azerbaijan, India, Iran, Iraq, Kazakhstan, Kyrgyzstan, Pakistan, Tajikistan, Turkey, Turkmenistan and Uzbekistan. In 2009, the festival was inscribed on UNESCO’s Representative List of the Intangible Cultural Heritage of Humanity, before this inscription was extended to new countries in 2016. Since 2010, 21 March is celebrated as the International Day of Nowruz.

Italian anthropologist Salvatore D’Onofrio is a professor at the University of Palermo and a member of the Laboratory of Social Anthropology at the Collège de France, where he coordinates the Cahiers d’anthropologie sociale collection and is part of the “New Year Archives in Paris” working group. He is the author of Le matin des dieux. Du Norouz persan aux Pâques chrétiennes (The Morning of the Gods. From Persian Nowruz to Christian Easter, 2018).