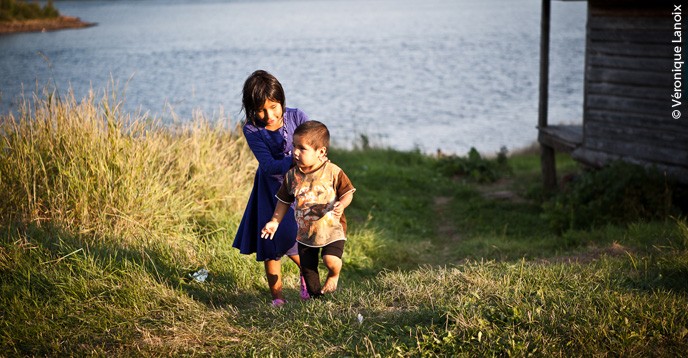 Photo taken during the shooting of the film Madezin, directed by Édouard Poucachiche of the Anishnabe Nation of Lac-Simon.

Manon Barbeau, it has been said, holds the camera in her heart the way others hold it in their hands. For the last fifteen years, she has invested all her enthusiasm and know-how in Wapikoni, a project that provides young people in indigenous communities with mobile audiovisual production tools. More than a thousand documentaries have been produced as a result, giving visibility to these stigmatized communities. But the achievements of Wapikoni go far beyond the cinema – and beyond Canada.

How did you come up with the idea of meeting the indigenous peoples of Canada?

It goes back to my youth. I think I inherited my father's interest in images, and my mother's spirit of activism.  My father was a painter and one of the sixteen signatories of the Refus Global (total refusal) Manifesto in 1948, that opposed the influence of the clergy in Quebec and advocated a free society. My parents have separated. My mother left for the United States, where she was involved in the civil rights  movement for black Americans.

Years later, I became interested in what had become of the children of that generation, and directed the film Les enfants de Refus global (The children of total refusal). That experience made me realize how art, and especially cinema, has a transformative power. When you get involved in a film the way I did, you're not the same person at the beginning and at the end of the shoot.

I wanted to share this feeling of transformation with those who undoubtedly need it most – the marginalized. I gave a voice to street youth and to prisoners, by holding up a mirror to them – that, instead of reflecting an image of prejudice and fear, allowed them to see beyond.

Then, in the early 2000s, I went to meet the most marginalized of the marginalized – Canada’s indigenous communities.

Could you tell us about your first experience with them?

I decided to write the screenplay for a film, La fin du mépris (The end of contempt), with fifteen young Atikamek people from Wemotaci, a reservation located between Manawan and Obedjiwan, in Haute-Mauricie, Quebec. I admired their talent and, at the same time, I discovered the wounds they bore within them as part of a painful legacy that is passed down from generation to generation.

Among the young screenwriters, one girl stood out for her intelligence, her dynamism and her generosity. She was a leading figure in her community. Her name was Wapikoni Awashish. One day, her car hit a logging truck on the road. Her life was felled by the very people who cut down the trees on her land. She was twenty years old. It was a terrible shock! In her memory, we conceived the idea of a place where young people could gather and create. That was how the Wapikoni project started. It was set up in 2004 by the indigenous community itself, with the support of the National Film Board and various public and private partners.

Since then, caravans converted into film studios have been traversing Canada. How is this working out in the field?

Indeed, we created our first mobile audiovisual production unit, Wapikoni Mobile, in a ten-metre-long trailer – the bedroom became an editing room and the shower a sound studio. We have five of these mobiles today. They visit communities at their invitation. The work is supervised by filmmakers who are trainers – teachers who specialize in working with young people with difficulties, and local coordinators who schedule our visits.

What do these young people talk about in their films?

Everything! Love, family, nature, territory... Many talk about traditions, of their identity, of the rupture between tradition and modernity. But they also produce contemporary creations, such as videos of community singers, often in indigenous languages. Elders also take this opportunity to transmit their knowledge in front of the camera, with complete confidence, because it is often their grandchildren who are interviewing and filming them.

Are these young people transformed by this experience?

Certainly. In general, this contributes to the affirmation of their pride in their identity and culture. It also  revives the hope of finding a place in society, other than that of a consumer. There are also those who discover their vocation for cinema or music and who continue their training.

Wapikoni also serves as an educational intervention project. The team collaborates with local community resources to prevent dropping out of school, addiction and suicide – by helping youth to develop self-esteem and independence.

Can this approach be replicated in other communities around the world?

It can be, and we have more than one example as proof. Our pedagogical method of learning by creating has proven to be applicable elsewhere in the world, with adaptations to local conditions.

We have established partnerships in South America (Bolivia, Peru, Colombia, Panama and Chile). We’ve also worked with the Sámi in Norway, and more recently, I went to Budapest to develop a project to break the ostracism that affects Roma youth.

Other vulnerable populations have also been included in our programme, such as Syrian refugees in Turkey,  or Bedouin communities in the Palestinian Territories and Jordan. In 2014, Wapikoni founded the International Network of Aboriginal Audiovisual Creation (INAAC), with the objective of exchanging experiences and developing co-productions.

You have been involved with Wapikoni for a long time.  What has the project achieved in concrete terms?

On the individual level, it has helped save some lives. It’s not me who says this,  it’s those who believe that they were saved who do. Collectively, it has helped to restore hope and self-confidence to indigenous communities, and to highlight them and give them international visibility.  Finally, I also see Wapikoni as a caravan that is slowly but surely moving towards realizing a dream that I have cherished for a long time – the birth of indigenous cinema.

“Here, young people kill themselves as we breathe elsewhere”

Canadian screenwriter and documentary filmmaker Manon Barbeau co-founded Wapikoni in 2004 with the Atikamek Nation Council, the First Nations Youth Council and the support of the National Film Board of Canada.

She has received numerous awards for her film work and for her commitment to the indigenous peoples in particular. On 16 November 2018, she was awarded the UNESCO-Madanjeet Singh Prize for the Promotion of Tolerance and Non-Violence.