Eternity, a sculpture by the Armenian artist Gevorg Tadevosyan.

It has been nearly a century since Hovhannes Tumanyan lived, but his poems have lost none of their originality, their emotional charge, or their ability to stimulate reflection. Using the form of narrative poems in rhyming verse almost exclusively, the writer forged his own style in the early 1900s, drawing inspiration from the Armenian oral tradition. His work inspired two operas – Anoush by Armen Tigranyan and Almast by Alexander Spendiaryan.

Evoking his childhood in his autobiography, Hovhannes Tumanyan (1869-1923) presents his father, Ter Matheos, not just as a priest of the Armenian church – who sang the usual repertoire of liturgical songs – but also as a bard who recited epic poems, accompanying himself on a tchonkour, a popular plucked-string instrument. It is in this familiar setting that the source of the fascination for narrative poetry in the child’s imagination should be sought. 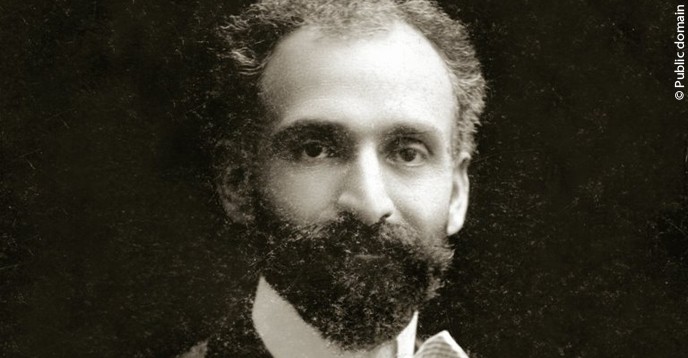 Hovhannes Tumanyan in the 1910s.

As for the image of his mother, Sona, it evokes in the child the somewhat wild alpine landscape of Dsegh, his native village. “My mother was born and raised in the mountains, she was a daughter of the mountains,” the poet who gave us the beautiful verses on the steep mountains of Armenia, would later write at the end of this portrait.

Added to this idyllic image is the family tradition that Tumanyan’s ancestors belonged to the great princely family of the Mamikonian dynasty, who for centuries had served as chief generals of Armenian armies. A family fiction or mythified story, the writer believed in it – even if his genealogical research did not quite produce the desired result.

From childhood, the future poet was immersed in the wonderful world of tales and legends, transmitted by his father – himself surrounded by a double aura, both sacred and profane. We understand that telling stories will become for Tumanyan, a way of thinking and of transmitting ancestral and folk material.

Born in February 1869 in Dsegh, a village in Lori province, in the north of what is today Armenia, the young Hovhannes had to leave this primordial Eden – first to study in Stepanavan, about forty kilometres from his village, and then in Tbilisi, the capital of Georgia. He would spend most of his life in this great cultural centre for all Transcaucasia (made up of Armenia, Azerbaijan and Georgia).

The death of his father prevented Tumanyan from completing his formal education at the Nersessian high school, one of the country’s best schools at the time. Obliged to support his  family, he began working as a secretary at the bishopric of the local Armenian church in 1887. But, stifled by the restrictive atmosphere there, he left the post. He then worked at odd jobs, struggling to support his growing family – because in the meanwhile, the young man had married and fathered ten children.

An enlightened self-taught man, this avid reader plunged into both Armenian and foreign culture. He read poets who were Russian (Lermontov, Pushkin), German (Goethe), English (Byron, Milton, Shakespeare), American (Longfellow) and many others – translating and “Armenianizing” them. He absorbed both Western and Eastern folklore.

At the Tumanyan House-Museum in Yerevan, the Armenian capital – where his library and some of his manuscripts are preserved today – we can measure the extent of his reading, and consult some of the documentation that the poet considered essential for the composition of his poems and prose narratives.

Reading Pushkin is likely to have reinforced his ideas on the formal elaboration of narrative, while it was probably Shakespeare’s “ghost” that dissuaded him from publishing his plays, which he eventually destroyed. Apart from this indirect influence, foreign literature appears very little in his own texts. They represent “reading contacts” that were essential to the development of a poet whose immediate environment offered few innovative literary models.

Tumanyan’s first collection, Poems, published in Moscow in 1890, was a great success with literary critics. Subsequently, all his collections would have the same generic title, with the exception of Harmonies, published in Tbilisi in 1896. Each volume included a number of previously published poems, to which new ones were added.

Following this lyrical interlude of the years 1890 to 1896, a completely new tone can be heard in his narrative poems – that cannot easily be classified into any established literary genre. A narrative that is versified, rhymed and structured in episodes – this is the common denominator of his new literary pieces, in which the author revisits famous Armenian or Caucasian fables, legends and tales, reworking them with a clearly allegorical aim.

When Tumanyan writes The Dog and the Cat, The Unlucky Merchants, The Convent of the Dove – or other tales that every Armenian has known by heart since childhood – his inventiveness lies less in the material used than in the way the action is staged. This action corresponds perfectly to an underlying idea, unveiled only at the end of the story. The narrative involves animals or humans in an ongoing plot with cleverly orchestrated twists culminating in a climax. The central message is expressed at the end, in one or two succinct phrases.

This literary technique, unique to Tumanyan, makes him an outstanding storyteller, who masterfully commands verse and word. It is the result of hard work, traces of which can be found in a multitude of drafts and successive versions of the texts. The poet often rewrites even texts that have already been published, transforming them in depth with the obvious aim of achieving as simple and effective an expression possible. In contrast to many of his colleagues who favoured being more prolific, Tumanyan used understatement, allusion, the right word, and in the literal sense, a true poetic method.

The age of literary maturity

It was at the very beginning of the twentieth century that Tumanyan achieved perfect mastery of the poetic narrative in verse, notably in Anoush and The Siege of Tmouk Castle. A pastoral epic set in idyllic Lori, Anoush is composed of six songs, beginning with a prelude. This story of thwarted love, with all the ingredients of a tragedy in verse, inspired Armen Tigranyan (1879-1950) to write his eponymous opera, which is still performed around the world today.

The Siege of Tmouk Castle recounts an episode in eighteenth-century Armenian history, in which Princess Almast, enticed by the false promises of the Persian king, Nadir Shah, betrays her husband, Prince Tatul, and delivers the fortress to the enemy. After destroying everything, the conqueror turns against the traitor and has her beheaded. The political significance of this poem is much more explicit than that of Anoush. It inspired Almast, the opera by Alexander Spendiaryan (1871-1928). Today, bronze statues of the poet and the composer stand in the foreground of the Yerevan Opera, a highly symbolic site in the Armenian capital. They remind us that the stories immortalized by them are still relevant today.

Around the same time, Tumanyan began writing the folk epic David of Sassoon, of which he would publish only a fragment. In it, he revisited a famous work of the Armenian literary tradition, to convey messages that were close to his heart – mutual respect among peoples, rejection of violence, and the rejection of all oppression.

Poet and man of action

This work remained unfinished, as did his poem The Firebird, because his public activities took up more and more of his time. Because, alongside  the poet, there was in Tumanyan a real man of action, who had always refused to be a mere literary figure – even when he created the literary circle, Vernatun (the upper chamber), in his own home, with a group of writer friends, including Avetis Aharonian, Alexander Shirvanzade, Avetik Issahakian and Nikol Aghbalian.

Substantially different from the many literary and artistic salons of Tbilisi, Vernatun’s main objective was to offer writers – including those passing through the city – a place to meet and exchange ideas. Pursuing the same goal, Tumanyan also founded an association of Armenian writers from the Caucasus. It remained the epicentre of Armenian literature until the October Revolution of 1917.

Tumanyan exhibited the same enthusiasm when he was involved in politics. During the Armenian-Tatar conflict in 1905, he played the role of negotiator between the parties and succeeded in preventing the hostilities from spreading to Lori province. He tried to do the same during the short Armenian-Georgian war in 1919, when the first symptoms of the evil that would prevail in March 1923 appeared. This activism led him to be arrested twice, in 1908 and 1911.

During the genocide of 1915, he organized relief efforts for Armenian refugees fleeing the devastated towns and villages. This painful experience is at the heart of two of his finest poems, ‘Rest in Peace’ and ‘With My Fatherland’– which have the merit of being free of both pathos and resentment, so widespread at that time in this kind of literature.

If it is true that “the poet is first and foremost the heart of his people”, as Tumanyan wrote, it is also true that the Armenian people will always carry his immortal poems in their hearts. Many years after the poet's death, we still hear his voice echoing in the steep mountains of our country:

The way was heavy and the night was dark,
And yet we survived
Both sorrow and gloom.
Through the ages we go and gaze at the stark
Steep heights of our land –
The Armenian Highlands […]
And we gaze with dolorous, longing eyes
At the earth in its gloom,
At the distant stars;
Ah, when will the dawn break at last
Over our green
Armenian Highlands?

With this article, the Courier joins UNESCO in the celebration of the 150th anniversary of the birth of Hovhannes Tumanyan, and of World Poetry Day on 21 March.

A French poet and novelist of Armenian origin, Krikor Beledian was born in Beirut, Lebanon, and has lived in Paris since 1967. He is the author of numerous collections of poems and essays, and a series of autobiographical stories in Western Armenian. His work has been published in Armenia, France, Lebanon and the United States.