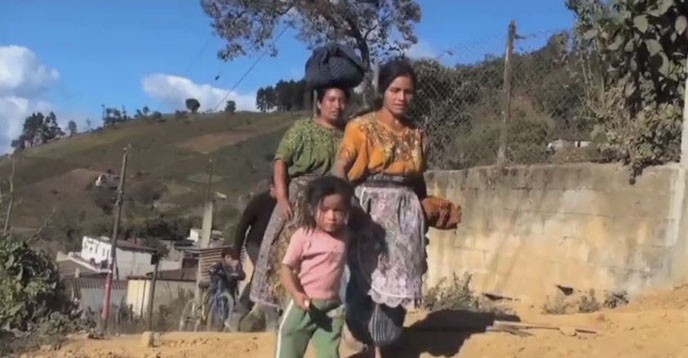 The Danish journalist and film director Niels Boel has worked among indigenous peoples for many years, in particular in the Amazon jungle, the Andean highlands, the Bolivian and Chilean lowlands and valleys, Central America and Canada.

For this issue of the Courier, he agreed to produce videos from seven of his films, responding to the request of many of our readers to enrich our magazine with audiovisual content.

The right to be consulted: The struggle of the indigenous peoples of Honduras (Spanish)

The film tells the story of Berta Cáceres, who was murdered in 2016, and in general, the struggle of indigenous peoples of Honduras resisting the looting of their land by private companies. Cáceres was a member of the lenca community in Northern Honduras and the leader of the Council of Popular and Indigenous Organizations of Honduras (COPINH). Her fight was against the construction of an hydraulic dam. She was awarded the Goldman Environmental Prize in 2015. The investigation into her death led to the arrest of the former executive director of the company behind the dam project. (2018, VF Film)

Quinoa: The best food in the world (Spanish with English subtitles)

Quinoa has been grown for centuries by the indigenous peoples of the Bolivian highlands. Organic, healthy and gluten-free, quinoa has won the hearts of Westerners. Some of the poorest Bolivians have benefited from its increasing popularity on the international food market. As land ownership is collective and the farmers are organized in cooperatives, the communities themselves, and not just a few individuals, are able  take advantage of the boom. (2014, VF Film)

The Red Lake: An unnoticed genocide in Guatemala (Spanish)

Jesús Tecú is one of the survivors of five massacres which took place in 1982, when the military government of Guatemala decided to build a hydroelectric power station on the Rio Negro, in spite of local opposition. The film follows Tecú’s and the struggle of other Maya Achís to obtain justice, thirty years after the horror. (2013, VF Film)

A dream comes true: A women’s cooperative in Guatemala (Spanish)
A group of Maya Kakchikel women from the Guatemalan countryside are denied membership in the men’s cooperative. They decide to create a cooperative of their own. The story is told by one of the cooperative’s founders, a 37-year-old woman who has experienced machismo and gender violence but now finds hope in the common struggle of the women. (2013, VF Film)

A poetic portrait of everyday life in a remote area of Bolivia as told by Mayda, a 9-year-old girl from the village of Azurduy. Once a year, the village comes to life during a weeklong market – it is inundated by itinerant tradesmen, fortune-tellers and Indian peasants, who ride into town or walk down from the surrounding mountains. The images of the film pay respect to the majestic calm of the Andean mountains. It received very good reviews in the mainstream Danish media : 5 out of 6 stars in Berlingske Tidende. (2005, VF Film)

Not everything that shines is gold – a tale of two villages and an oil company in the Amazon jungle (Spanish)
A multinational oil company wants to search for oil on indigenous territory in the Amazon jungle of Ecuador. This creates divisions between two Indigenous communities – one of which hopes the company will bring jobs and growth to the region, while the other wants the company to stay away in order to preserve the environment and the traditional way of life. Friends split up, families are divided and communities which used to be good neighbours are in conflict. (2005, VF Film)

Pills, Plants, Witches and Doctors: A journey to the Atlantic Coast of Nicaragua (Spanish)

A European traveller arrives on the Atlantic coast of Nicaragua (La Mosquitia) and is surprised to see that the Miskitos seem to have lost their traditional way of life. They are Christian, they wear jeans and baseball caps. Travelling to more and more distant villages, the traveller discovers that there are still traditional beliefs and customs among the Miskitos, particularly in the area of health care. Even the head of a health clinic, as well as a shepherd and admit it: "If there is no medicine we find a healer or a medicinal herb to cure us".  In the film, subjective impressions of the life of the Miskitos alternate with portraits of inhabitants who describe their vision of the Miskito world.(VF Film, 1994,  in cooperation with Barbara Scherfig)

Author of a dozen documentaries shot in Latin America and Africa, Niels Boel (Denmark) is a journalist and an independent film director (www.vffilm.dk). He was responsible for the Oxfam IBIS communication programme dealing with indigenous peoples in Latin America and has also worked as head of section with the Danish Ministry of Culture and as a consultant for the Danish International Development Agency (Danida). He is the author of the books Migration in the Age of Globalization (2009) and The New Latin America (2016), in Danish.