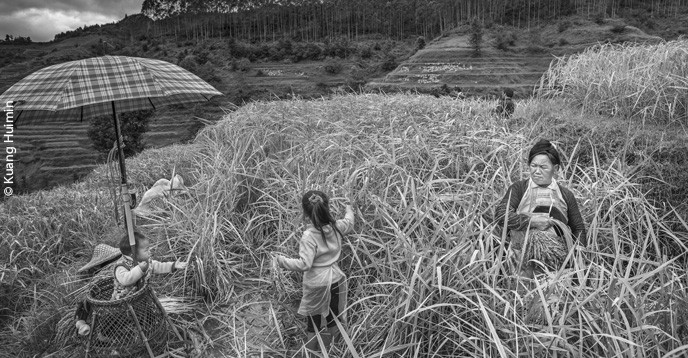 In China’s Congjiang county, all hands are at work to harvest rice in the autumn.

The Dong people, a Chinese ethnic minority who have lived for thousands of years in Congjiang county, in the heart of Guizhou province, were ecologists before their time. Centuries ago, they invented an agricultural system that we would term “green” today – producing organic food while preserving the stability and diversity of local ecosystems. The “Rice-Fish-Duck” Symbiotic System is the direct result of their ancestral wisdom.

Inhabited mainly by the Dong, the Miao, and thirteen other ethnic minorities, Congjiang county is lacking in arable land. Faced with a hostile environment, the Dong have shown genius by inventing an agricultural production system that provides economic, ecological, social and cultural benefits.

Relying on their ancestral practices to this day, they allow the ecosystem to recycle the flow of energy and material. Traditional varieties of glutinous rice have been preserved, and are cultivated on terraces where they also breed fish. When the fish grow to  ten centimetres in size, ducklings are introduced to the terraced fields for breeding.

Dating back to the Eastern Han dynasty (25 AD to 220 AD), the “Rice-Fish-Duck” system is based on the biological and ecological characteristics of the various organisms, where the needs of each are respected. This is done making full use of the available solar energy, water and mineral resources – creating a production structure that benefits all.

Covering an area of approximately 12,600 hectares, the rice shoots provide shade and organic food for the fish and ducks, who in turn, feed on pests and produce an excellent manure – thus playing a major role in weeding, fertilizing and oxygenating the rice fields. The varieties of rice, ducks and fish are all local and do not require any pesticides, because the system offers them excellent protection against diseases. This effectively preserves the diversity of local agricultural species and ecosystems, and also considerably reduces animal feed and labour costs.

For the villagers of Congjiang county who live in isolation in the mountains, these rice fields are the main source of food. Over a hundred kinds of edible wild plants including fern, bamboo shoots and funghi co-exist with the rice varieties – as do taro, lotus root, water celery and plantain. Aquatic animals such as snail, eel, and loach are also eaten, providing the inhabitants with high-quality protein. The organic farming model increases the market value of the fish and ducks, which sell for twice as much as conventional products.

Recognizing this agro-ecosystem as “an extraordinary living model of water and soil resources”, the Food and Agriculture Organization of the United Nations (FAO) designated it as a Globally Important Agricultural Heritage Systems (GIAHS) site in 2001. This outstanding example of Chinese alpine agriculture was included by the Chinese government in the first round of the country’s Important Agricultural Heritage Systems in 2013.

A new lease of life

Nevertheless, this traditional agricultural system is threatened by globalization and the high productivity and efficiency of modern agriculture. The indiscriminate introduction of exotic high-yield crop varieties has caused the area under the system to decrease each year. Also, the large-scale use of pesticides and fertilizers over several decades has caused serious farmland and water pollution in the region,  threatening food security.

An increasing number of Chinese citizens are becoming aware of the shortcomings caused by modern agricultural production, and realizing the importance of healthier and better-quality food for their societies. They have started advocating the use of traditional practices in the future development of agriculture. This should ideally protect ancient agriculture systems – ensuring  higher incomes for farmers, and the protection of the environment. It would also help promote tourism to the region and the preservation of  the country's cultural heritage.

This new awareness is expected to provide a fresh lease of life for the “Rice-Fish-Duck” system, which could serve as an inspiration for modern agriculture in China and other parts of the world where similar natural conditions prevail. It is an invaluable resource that could help provide solutions to the problems caused by agricultural and environmental degradation worldwide.

A professor at the Faculty of Life and Environmental Sciences of the Minzu University of China, Xue Dayuan is the lead author of the Intergovernmental Science-Policy Platform on Biodiversity and Ecosystem Services (IPBES), Global Assessment.

An ethnoecologist from the Tujia ethnic minority (China), Dai Rong works at the Nanjing Institute of Environmental Sciences. She is one of the lead authors for the Intergovernmental Science-Policy Platform on Biodiversity and Ecosystem Services (IPBES) Asia-Pacific, Regional Assessment.