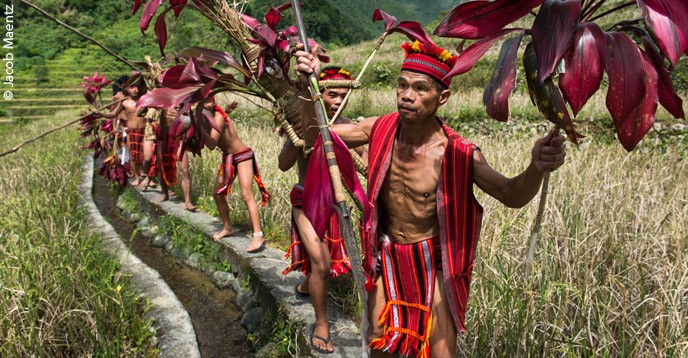 Celebrations to mark the end of the rice harvest season in the paddy fields of the Philippine Cordilleras, a UNESCO World Heritage Site.

For indigenous peoples, languages not only identify their origin or membership in a community, they also carry the ethical values of their ancestors – the indigenous knowledge systems that make them one with the land and are crucial to their survival and to the hopes and aspirations of their youth.

But today, the major influence on the sorry state of their languages is the fact that indigenous peoples are threatened themselves.

The biggest threat comes from climate change, which is gravely impacting their subsistence economies. So-called development projects such as dams, plantations, mines and other extractive activities are also taking their toll, as are government policies that minimize diversity and encourage homogeneity. There is an increasing propensity of states to criminalize any dissent, resulting in more and more rights violations. We have witnessed an unprecedented rise in the number of indigenous peoples harassed, arrested, imprisoned, and even summarily executed for daring to defend their territories.

What is often overlooked in discussions on these concerns is the impact of these threats on  indigenous cultures and values. Indigenous peoples derive their identities, values and knowledge systems from their interaction with their territories, whether forests or seas. Their languages are shaped by their environment – it is their attempts to describe their surroundings that forms the bases of their unique tongues. Thus, when the territory is altered, changes also occur in the culture and eventually, in the language.

The Inuit, for example, have more than fifty terms for snow, each appropriately describing different types of snow, in different situations. Snow is a prime element that the Inuit live with, and therefore have come to know intimately. The same is true with the Igorot of the Cordillera in the Philippines when describing rice – from when it is but a seed ready for planting to when it is fully ripe and ready for harvesting, to when it is newly cooked and ready to be eaten and when it takes the form of wine.

While new information and communication technologies could be used to enhance the learning process and provide tools to preserve indigenous languages, this is sadly not the case. Because indigenous peoples are considered minorities, their languages are often overlooked in positive efforts by governments to protect languages. For instance, in the Philippines, the government has launched the use of mother tongues in schools, but no resources are available in terms of teachers and learning materials to allow for indigenous children to be taught in their mother tongues. As a result, they end up mastering another language and eventually losing their own.

In addition, because of years of discrimination, many indigenous parents choose to teach and talk to their children in the dominant languages – in order to create optimal conditions for their social success. Since their mother tongue is often used only by older people, an entire generation of indigenous children can no longer communicate with their grandparents.

In my community, the Kankanaey Igorot, we have the concept of inayan, which basically prescribes the proper behaviour in various circumstances. It encapsulates the relationship of the individual to the community and to the ancestors. It goes beyond simply saying “be good”; it carries the admonition that “the spirits/ancestors will not approve”. Because many of the young people now no longer speak the local language and use English or the national language instead, this notion and value is being lost. The lack of dialogue between elders and the youth is exacting a toll, not just in terms of language but in ancestral ethical principles.

However, with the growing global recognition of indigenous knowledge systems, the hope that indigenous languages will thrive and spread in spoken and written forms is being rekindled. Many indigenous communities have already instituted their own systems of revitalizing their languages. The Ainu of Japan have set up a learning system where the elders teach the language to their youth. Schools of Living Tradition in different indigenous communities in the Philippines similarly keep their cultural forms, including languages, alive.

This edition of the Courier is a welcome contribution to the worldwide effort to focus more on indigenous languages. It is a valuable companion to the ​​​​​​UNESCO-Cambridge University Press book, Indigenous Knowledge for Climate Change Assessment and Adaptation, published in 2018. The book illustrates the importance of indigenous knowledge in addressing contemporary global challenges.

A Kankanaey Igorot from the Cordillera in the Philippines, Minnie Degawan is Director of the Indigenous and Traditional Peoples Program at Conservation International, based at its international headquarters in Virginia, United States. She has years of  experience advocating for the greater recognition and respect of indigenous peoples’ rights, and has participated in various policy-making processes, including the drafting of the United Nations Declaration on the Rights of Indigenous Peoples (UNDRIP).