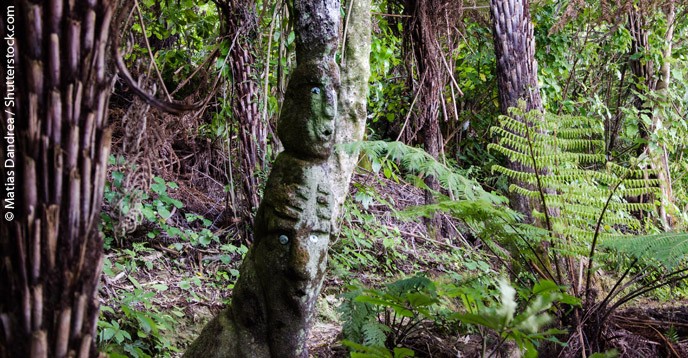 A tree trunk in the wild, carved by the Maori.

The notion of tătai whakapapa is fundamental to the world-view of the Tuawhenua. These Maori of New Zealand believe that everything that exists in their world is genealogically connected – bats, lizards, birds, insects, trees, plants, mountains, rivers and lakes. This connectedness provides strength to the ecosystem. As these elements are eroded, so is the resilience and integrity of the environment and the tribe.

For the Tuawhenua, it is the whenua, or the land, that defines who you are and where you come from. The word also means placenta. In both cases, whenua refers to your beginning and to your connection with your mother – the one who gave you life.

When Tuawhenua women give birth, wherever they are in the world, the placenta must be brought back home and be buried on the tribal lands. The same tradition applies to the pito, or umbilical cord – the action of burying it on your lands signifies your permanent connectedness to Papatŗănuku, Mother Earth. It connects you to your place in the world.

Maintaining ties to the land and its resources is critical to the Tuawhenua, as this is perceived as an expression of their mana, authority or power. Regardless of hardships and downfalls and whatever was happening in the world, the Tuawhenua elders recognized the need to always uphold the mana of the individual, of the hapŗ or the sub-tribe, and of the iwi, the tribe.

The elders understood it was hard for some to keep ties and bonds to the land, the waterways, the animals and the birds – but these were all seen to be part of what it means to be Tuawhenua.

The elders recognized that mana was one of the most important principles for their people. But  it was reinforced by the concept of mauri, the life force or essence of life. When the Tuawhenua refer to the purity in their culture, it reflects the mauri of the environment. For them, the mauri of the forest can never be taken away. As long as the rivers flow, as long as one tree stands, the life force cannot be extinguished – every element of the world has a certain level of mauri.

Members of the Tuawhenua community in New Zealand, Kirituia Tumarae-Teka and James (Tahae) Doherty are indigenous knowledge-holders on pollination and pollinators associated with food production.