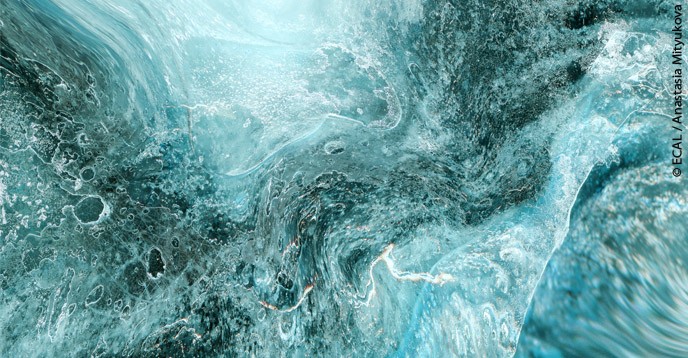 Work from the series Find a way or make one, by the Swiss-Russian photographer Anastasia Mityukova, made using only materials she could find at home: old photos, webcams, books, newspapers and ice.

Eighty per cent of the world’s population is exposed to high levels of threats to water security and a severe water crisis is looming by 2070. Faced with these alarming estimates, the author argues that a business-as-usual attitude will not work.  Water management is a scientific issue, but it is also a matter of politics, governance and societal values. A new transdisciplinary science is urgently needed.

The world’s freshwater environment is facing unprecedented pressures in the twenty-first century. A growing global population and economic development have led to increasing demands on water resources. The overuse of water is widespread; consequences include reducing river flows, the loss of lakes and wetlands and falling ground-water levels.

The most dramatic example of this is the loss of the Aral Sea in Central Asia, which used to be the fourth-largest saltwater lake in the world, but has become a desert in forty years, shrinking to barely ten per cent of its original size due to upstream water withdrawals.

More generally, human impacts on natural systems are so extensive that the term Anthropocene has been used to describe the current geological epoch [see Welcome to the Anthropocene, Courier, April-June 2018].  The increasing pressures on water resources are set against this backdrop of extensive anthropogenic change.

Urbanization (more than half of the world’s population now lives in cities), deforestation and the extension of cultivated land (1.5 billion hectares worldwide) have had a significant impact on hydrology and water quality.

Threats on a global scale

Nearly eighty per cent of the world’s population is exposed to high levels of water security threats. Urban areas and agriculture are important sources of water pollution, threatening aquatic life and increasing pressures on freshwater ecosystems. In 2010, experts estimated that 10,000 to 20,000 freshwater species were extinct or at risk.

Inevitably, pressures on the hydrological environment to meet the food and energy needs of a growing global human population will only increase. Food production will have to rise by seventy per cent by 2050 to meet projected demand, according to a 2012 estimate of the Food and Agriculture Organization of the United Nations (FAO).

A 2013 study on water scarcity published in the Hydrology and Earth System Sciences (HESS) monthly concluded that about half of the world's population will experience severe water stress between 2071 and 2100.

The changes wrought by human actions to the environment have also increased water-related risks to life, property and infrastructure associated with extreme events. This was illustrated by the 2017 flooding of Houston, Texas, in the United States. In an area where development had proceeded in spite of known flood risk, 300,000 structures were inundated, causing the evacuation of hundreds of thousands of people, with flood damage estimated to exceed $125 billion.

In an increasingly interconnected world, the impact of floods and droughts is not limited to local consequences. The 2011 flooding in Thailand caused economic losses estimated at  $46.5 billion by the World Bank, due to the disruption of global electronics supply chains. And the heat wave in Russia in 2010, which affected wheat production and global food prices, was said to be a factor in the social unrest associated with the Arab Spring, The Economist reported in 2012.

Recent global warming has led to profound changes in the hydrological environment. The glaciers in the Canadian Rocky Mountains, for example, are rapidly retreating. They are  expected to be largely lost by the end of the century – yet they feed major rivers draining into the Pacific, Atlantic and Arctic oceans.

The forests in western Canada are also receding, largely because they have been infested by bark beetles, whose proliferation is associated, in part, with warmer winters. While Western Canada is a regional example, it is worth noting that half the world's population depends on water from cold regions, where warming can be expected to have similarly severe effects. A study published in the journal Climatic Change in February 2016 states that by 2050, between 0.5 billion and 3.1 billion people will be exposed to an increase in water scarcity caused by climate change.

How can the water science community best respond, to provide the understanding and decision- support tools needed to address these challenges? Incremental science, inching forward in small steps, is not up to the task, and a business-as-usual attitude cannot be tolerated. A more holistic scope, on a global scale, and strategic focus is needed.

Firstly, there is an increasing need for better scientific understanding of the water environment in the face of unprecedented environmental and societal change. These issues cut across disciplinary boundaries. For example, to predict future river flows in western Canada requires an understanding of how ecosystems and agriculture will respond to climate change.

In turn, the prediction of future climate depends on understanding the changes in  land-atmosphere feedbacks – such as the greening of the shrub tundra in the North, or the proliferation of vegetation, especially shrubs, that will absorb more and more solar energy, thus contributing to global warming.

The only certain thing about the future is that it will be highly uncertain, when it comes to  climate and human socio-economic development – and interactions between the two.

This uncertainty must be managed. Given the complexity of water systems and their interdependence with land, energy and food systems, at scales from local to global, managing uncertainty will require more adaptive and flexible strategies than those of the past. The past can no longer serve as a reliable guide to the future.

We need to analyze vulnerability and adopt strategies that foster resilience – the ability of a system to absorb shock and continue to regenerate without changing to a new state.

It is widely recognized, for example, that there has been a disconnect between the science produced for climate impact assessment and long-term water planning or climate adaptation. In general, for science to be effective in delivering solutions, it must address problems that are deemed relevant to decision-makers, to deliver tools to users in a timely and useful format, and to include user input. The latter provides the credibility and legitimacy needed to resolve the politically contentious and socially significant issues that surround water resources management today.

This illustrates how important it is for scientists to recognize that the engagement of all stakeholders is a necessity, not an option. The new research paradigm should include a thorough knowledge of the social processes that accompany the effective – and reciprocal – engagement of science and policy.

It is crucial to recognize that local stakeholders are an important source of knowledge. Indigenous communities, for example, have a wealth of multi-generational knowledge of their land and its interactions with natural forces [see the Wide Angle section of this issue]. This knowledge must be used for the benefit of science. That is why – as part of the Global Water Futures (GWF) programme in Canada – we launched a project with Canada's Aboriginal peoples in April 2018, to work together on a research strategy that can help solve the water problems facing these communities.

Ultimately, the major challenges of water security lie with governance. The question of who has the power to make decisions (and how these decisions are made) is therefore crucial.

If the scientific understanding and prediction of water changes pose significant scientific challenges, so does water management. Water security in the twenty-first century is both a scientific and a social issue. Therefore, a new transdisciplinary approach is needed that will establish links between the natural and social sciences.

To summarize: to prevent a major water crisis, we need to develop new scientific knowledge to understand the evolution of water systems that involve the relationship between man and nature; to establish new interdisciplinary modes of scientific collaboration to understand the interconnections of these systems and their societal implications; to integrate local knowledge into scientific research to address user needs; and to put in place more effective mechanisms to translate scientific knowledge into societal action.

With this article, the Courier marks the celebration of World Water Day on 22 March.

Professor at the School of Environment and Sustainability at the  University of Saskatchewan, Canada, and Emeritus professor of Hydrology at Imperial College, London, Howard S. Wheater (United Kingdom) has wide international experience of hydrology and water resources and is the author of seven books.