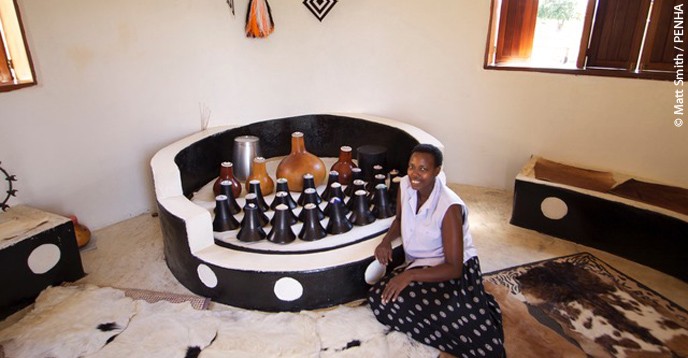 Bahima women pastoralists in south-western Uganda live under the double burden of traditional and modern life. In the past, their lives were full of difficulties. Today, their slow emancipation comes at a high price.

The Bahima are nomadic pastoralists, now settled in south-western Uganda. According to legend, they are descendants of Kahima, one of the three sons of Ruhanga, the Creator, to whom he had entrusted the breeding of longhorn Ankole cows. This breed of cattle – their main means of subsistence – has become a symbol of their identity, even though they now raise other breeds and engage in other occupations.

A fate decided at birth

According to custom, when a girl was born to the Bahima, she would be hoisted on the back of a bull, or a gourd for churning milk would be placed on her lap and she would be told, “Ezaawe ziri obuseeri!” or “Owaawe n'obuseeri!” In Runyankole, a Bantu language, this means “your cattle (or your property) are on the other side of the valley and your home is on the other side!” This meant that she would leave her native home and would never inherit anything from her father. Although this ritual is not performed anymore, the custom has not changed. With the exception of some enlightened and educated Bahima, fathers do not leave anything to their daughters.

In a traditional home, a girl would be taught domestic chores when she was 7 or 8 years old. She would clean and smoke milk pots and gourds, tidy the grass-thatched, cow-dung floored huts, and sweep the courtyard. At the age of 9, she would be taught how to make emihaiha, covers for milk pots and gourds; how to make ghee; how to clean the calves’ shelters, how to cut grass to cushion the shelters, and how to take the animals out to graze near the home.

At 14, a girl was ready for marriage. When the “bride's price”, measured in terms of head of cattle, had been agreed upon and delivered by the fiancé's family, the ritual of “fattening” the girl could begin.

Being her husband’s property

The future wife would spend several months with a relative, so she could rest and gain weight. She was made to drink litres and litres of milk, until stretch marks appeared on her skin – a sign of being satiated. The bride was then ready for okuhingira, the traditional wedding ceremony. She would receive all kinds of gifts ranging from milk pots to household items and cattle – all of which would belong to her husband.

After she moved to her marital home, she would spend four months behind curtains on her honeymoon, forced to hide her face from everyone except her husband and close family members. She was supposed to remain overweight and her mother-in-law or another relative would  continue to ensure that she consumed a lot of milk. She was not allowed to do any physical work or to leave the house.

The husband chose the enyweisa, the cow whose milk his wife would drink – as a sign of affection.

At the end of the honeymoon, the wife was expected to take over the household chores. She churned milk to make ghee for the dry season and to smear on enkanda, the hides used for clothing and bedding. Ghee was also used to make a sauce called eshabwe and to add flavour to meat and cooked blood. She also decorated the ensiika (walls of the hut), the emiroongo (fixed mud seats) and the orugyeegye (the platform where the dairy utensils are stored).

A sedentary lifestyle and education have brought about many changes in Bahima society. Women are now allowed to own property, cattle and land. They practise mixed crop and livestock farming or engage in other non-pastoral activities. They sell milk, open restaurants, craft shops, grocery and dry food stores. More and more Bahima women are moving to towns, where they can send their children to school. Some women are heads of households – they decide which cattle to sell, employ labourers and pay their children’s school fees. Others emigrate abroad, particularly to the Middle East and Europe.

Unfortunately, early marriage is far from being eradicated and the wife continues to be the property of her husband. She cannot visit or care for a sick parent or a child born of a previous marriage. And she is not allowed to attend the weddings of her brothers and sisters – her husband represents  her instead.

Traditional life was hard for Bahima women. The new generation is not spared either the traditional burdens or the challenges of modern life.

Representatives of Uganda’s Karamoja and Bahima wish you a Happy International Day for the World’s Indigenous Peoples (Video, from August 9, 2017).

A project officer at the Pastoral and Environmental Network in the Horn of Africa (PENHA Uganda), an international NGO committed to addressing issues of pastoralist concerns from a regional perspective, Elizabeth Katushabe (Uganda) is also a member of the Ankole Cow Conservation Association (ACCA).